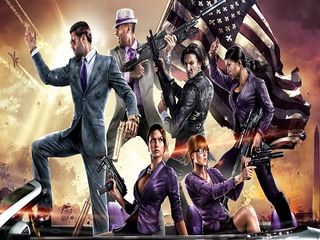 With Saints Row the Third, critics (mostly Yahtzee) voiced their concerns abut players having little motivation to progress through the game since they receive an arsenal of helicopters and rocket launchers within the first few hours of the game. It shirks the sense of progression that's found in the Grand Theft Auto series, where players have to put at least some amount of effort into obtaining an aircraft. In Saints Row IV, Volition showed that it took none of this criticism to heart and instead decided the most appropriate answer to this was a giant middle finger.

At its core, Saints Row is a series of comedy games and Volition showed that its perfectly willing to bend gameplay in favor of allowing players to have fun. As a result, Saints Row IV is centered around The Boss fighting off aliens in a simulated world as the president of the free world... with superpowers. (Think superpowers along the line of Prototype and Infamous and not Marvel/DC.)

Yes, since "bigger and better" is apparently the mantra for all sequels, Saints Row IV decided to go the route of superpowers over better cars, guns, and airplanes. (To be fair, this isn't necessarily accurate about the guns as the guns do get bigger and better.)

But it's not just gameplay itself that's been given the horse steroids treatment. The franchise has always been about poking funnies at the tropes of the sandbox genre. This time around, nothing is safe from the reach of Saints Row IV's dubstep gun. Movies and gameplay genres are all equally lambasted by the game's penis jokes and irreverent sense of humor.

Originally, after the first few hours of playing the game, I was ready to write it off as the Scary Movie III of videogames. The jokes felt all too random to me and the gameplay a little too scattered as a result of all the gameplay genres it tries to parody. Essentially, I thought that Saints Row IV was trying too hard to top Saints Row the Third. I wondered whether I was truly enjoying myself, or if I was only cracking smiles and laughs because of how much Saints Row IV appealed to my sense of gaming nostalgia.

A few hours later, it finally clicked with me. I was taking Saints Row IV far too seriously and holding it to a standard that the game wasn't trying to reach. Half of the jokes cracked were at the franchise's own expense. If parody, when done correctly, is the ultimate form of flattery, then Volition is writing a long love letter to the games industry. It manages to capture the essence of what we love about most games, even if each genre drags along with it very silly tropes. And in this day, where we're fast approaching photorealism in graphics and beginning to tackle on hard hitting issues with games, Saints Row IV is Volition's gentle reminder to gamers that games are meant to be fun.

Though I did have a blast playing Saints Row IV, there were some technical issues I encountered with the game that did somewhat mar the experience. At a juncture late in the game, I was prevented from progressing in the game simply because the mission broke for me. I heard reports from fellow previewers who also encountered the same issue at a similar juncture. For reasons unknown, I was eventually able to get on through after reloading the same mission multiple times. Hopefully, technical glitches like this will be repaired come launch day tomorrow.

In any case, while there may be games out there like The Last of Us or BioShock Infinite vying for your attention, leave a little space on your gaming shelf for Saints Row IV so that you can keep in mind that it's okay to laugh, especially at lowbrow humor, in the midst of all the angst.