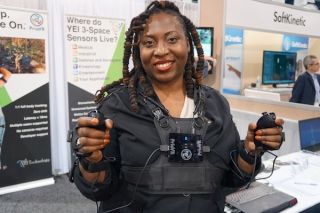 Via a set of strategically placed motion-capture sensors and Velcro straps, players can move their arms and legs in the real world to interact with their environment in the virtual one.

Yei Technologies co-founder Paul Yost claims PrioVR has no drift, effectively eliminating the annoying panning effect that occurs when VR users move slightly to the left or right. The device also has less than 10 milliseconds of latency. The secret of Yei Technology's success lies in the combination of accelerometers, gyroscopes and magnetometers.

PrioVR is comprised of a body suit lined with black glossy sensors on the chest area and extending down the arms and legs. The upper body portion of the suit looks like a futuristic bulletproof vest. The mesh material fit snugly against our frame and was held in place with a pair of large Velcro straps. A fairly large black box sits in the center of the vest, with flashing blue lights.

MORE: Most Anticipated Games of 2014

Once the suit was in place, we looked like we were ready to engage in an epic laser tag battle. We were also given a pair of small controllers. Each controller had a single analog stick and two shoulder buttons.

For our demo, Yei Technology created a zombie game for us to wreak some virtual havoc.  The left analog stick controlled the camera with the right handling movement. The bottom left trigger button launched us into a powerful jump to navigate the rugged terrain.

The carnage started with our character cracking a few undead heads with the business end of a bat. Swinging the Louisville Slugger required us to raise our right hand and swing it downward in a forceful manner. The action was seriously satisfying, and before we knew it, we had killed at least 10 zombies.

After bludgeoning a few waves of the walking dead, our arms became tired. We switched to an AK-47 and began perforating zombie flesh. We used our right arm to aim and squeezed the right controller's trigger to squeeze off a few rounds.

While the game is fun with just the suit, it can also be used in tandem with other virtual reality gear such as the Oculus Rift or Sony's virtual headset. Adding the Rift to the mix added another level to the gameplay, letting us bring the pain to the zombie horde in 360 glorious degrees.

As far as the zero-drift and low-latency claims, we experienced smooth movements with no lag when we were connected to a PC. However, we noticed a delay when connected to the booth television, but that had more to do with the TV's latency than the PrioVR's.

Yei Technology plans to start shipping the PrioVR in June. Gamers interested in the upper-body device can expect to pay $399, and it will cost $499 for the entire suit.

In the meantime, the company will be launching a Kickstarter campaign starting on February 14. Proceeds from Kickstarter will be put towards mass-producing the device.

The PrioVR is a tantalizing look into the growing industry of consumer virtual reality systems.