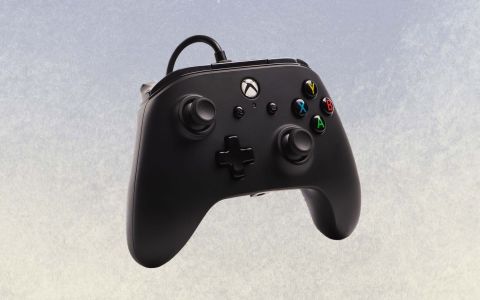 The PowerA Enhanced Xbox One Controller brings a lot of value, but that raises the question: Why not pay a little more for the real thing?

It's hard out there for third-party-controller manufacturers. The Xbox One Controller is quite possibly the best controller ever to ship with a console. To make a third-party competitor is a colossal challenge.

But the Xbox One Controller also has an MSRP of $59.99, a high price to pay if you're looking for a secondary unit for the occasional friend. This presents the opportunity for third-party manufacturers to capitalize on the market of buyers looking for a more affordable controller option and add a few more features along the way. But with cost-cutting usually comes compromise.

PowerA has released a new Enhanced version of its Xbox One controller, and given how much we enjoyed the company's Nintendo Switch Pro Controller, we had high hopes for this new unit. Unfortunately, the quality of the standard Xbox One Controller is hard to match.

PowerA's Enhanced controller is nearly a one-to-one replica of the standard Xbox One Controller, and that's a good thing. The most notable design difference, however, is the new Advanced Gaming Buttons.

These are programmable buttons, located under the handles, that can be reprogrammed in about 5 seconds to any other button on the controller. This can be incredibly handy for fans of first-person shooters, allowing players to map functions such as reloading weapons or throwing grenades to these buttons, ensuring thumbs never leave the joysticks.

Because this is a $30 controller, the material quality isn't as sturdy as that of the standard Xbox One Controller. But the shell of the controller matters less when compared to the buttons themselves.

I'll be straightforward: Not a single button or stick on the PowerA feels as good as on the standard Xbox One Controller. The first thing that surprised me while playing Rocket League was the slight abrasiveness I felt when pushing down the right trigger. I could feel the material of the trigger rubbing against the shell of the controller. I was a little surprised and pulled out my standard Xbox One Controller to compare. And no, Microsoft's offering does no such thing.

When I switched over to Icons: Combat Arena, a Super Smash Bros.-like arena fighter currently in early access, the difference in quality was jarring. The buttons on the PowerA Enhanced controller felt stiff. Doing a short hop, which requires a very light tap of the jump button, into a quick attack required very deliberate inputs. It lacks the delicate attention to detail Microsoft has given its controller, like the slight differences in button height and button shape. I found it hard to slide my thumb between Y and B, for example, whereas on a standard controller, that slide feels smooth.

But trying a more advanced technique, like a wavedash — which requires a quick press of the Y button into a left or right trigger — was even more difficult. I wasn't able to land wavedashes properly, and it got me wondering: Is it the same on a standard Xbox One Controller? After plugging in the controller that came with my Xbox One S, I was pulling off perfect wavedashes as if I were using a GameCube controller. This is very high praise.

Not a single button or stick on the PowerA feels as good as on the standard Xbox One controller.

The stick resistance also felt tight. It's possible that, after a lot of wear, the sticks might loosen up. But Microsoft has said it's not necessary to "break in" a controller.

When jumping over to racing game Forza Motorsport, I was surprised how the stiffness in the sticks affected my driving. The sticks are accurate, and in my tests, I couldn't find much, if any, dead zone. But on the standard Xbox One Controller, there's finesse in precision that made me feel more in tune to the driving experience.

If you're a fan of shooters, then the programmable buttons on the back are a nice addition. The buttons are very easy to program and work without a hitch. They do take some time to get used to, but the feature offers extra value to competitive gamers. But even the addition of these extra programmable buttons are counteracted by the hindrances in stick and button feel. Ultimately, if you're a hard-core competitive gamer, PowerA's option will not satisfy you.

MORE: Xbox Design Lab Review: Is This Custom Controller Worth It?

The D-pad on the PowerA Enhanced controller is squishy, like the one on a Wii controller or a Game Boy. I find this easier for fighting games like Street Fighter. It's not bad. All inputs registered correctly, and it wasn't too difficult to pull spiral arrows with Cammy, which requires a quarter-circle motion.

As for the rumble, if you're playing a game with a lot of it, turn it off. While I was playing Rocket League, the rumble was so intense that it felt as if the bones in my hands were rattling. PowerA's controller doesn't have the precise and subtle trigger rumble of the standard Xbox controller — not even close.

PowerA's Enhanced controllers do have one thing going for them: looks. The controllers come in a wide variety of flavors, from slick fades to camo.

Of course, Microsoft has its own Xbox controller design lab with a wealth of customizable options, but those start at $69.99. If looks really matter to you and you want to create a particular chic with your gaming setup, then PowerA is an awesome value on the design end.

If you're in the market for an Xbox One controller and you're on a tight budget, I'd recommend waiting for a sale on Microsoft's official controller, which often drops to $40 during sale periods.. While even then it's $10 more expensive than PowerA's offering, it's worth the extra cash.

The standard Xbox One Controller gives you much better performance, provides more subtle rumble and is wireless. It's really hard to recommend PowerA's controller when Microsoft's controller is so much better.

If you find a PowerA controller for less than $20 and you plan to use it when your kid cousin comes to town, then sure, pick it up. But otherwise, you should pass on this controller.