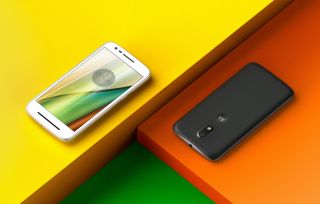 The fourth-generation of the $199 Moto G is only now rolling out to customers, but Motorola has an even cheaper phone in the works. A 2016 edition of the Moto E will debut this fall with a larger screen size while retaining its predecessor's budget pricing.

For now, Lenovo-owned Motorola only announced the Moto E's availability in the UK, where it will cost £99. That's about $130 in the what's-money-really-worth-anyhow environment that the UK's Brexit vote has unleashed on us. There's no word on when or if the newest Moto E will reach the U.S., but it seems like it should make the trip across the Atlantic eventually. The current Moto E is a popular option among phone shoppers with an eye on their bottom line, and the second-generation Moto E remains our favorite unlocked Android phone for less than $100. (In its post on the Moto E, though, Android Police speculates that Moto's U.S. focus could rest solely on the Moto G.)

When it does arrive, the new Moto E will look a bit larger than the current version. The new phone features a 5-inch HD screen. That's a noticeable increase over the 4.5-inch 960 x 540 display in the current Moto E. And it seems to be part of an ongoing trend at Motorola, where the new Moto G's 5.5-inch display dwarfs the 5-inch screen on last year's model.

The screen isn't the only thing increasing on the Moto E. The new phone will have a 2,800 mAh battery, up from the 2,390 mAh power pack on the current phone. The phone retains the water-resistant coating of the current Moto E, where a splash of water on the phone shouldn't be a cause for concern. The new Moto E features a quad-core processor, 8- and 5-megapixel cameras on the rear and front of the phone and Android Marshmallow.

We look forward to getting our hands on the new Moto E once it makes its U.S. debut.