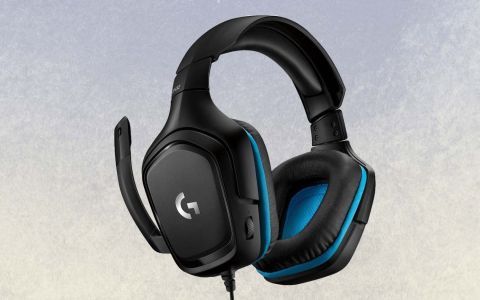 The Logitech G432 is worth checking out for its strong audio performance, versatile connections and reasonable price.

The Logitech G432 is a long-overdue update to the G430 that has everything that made its predecessor worthwhile, plus much better music performance. But it also looks and feels very much like a four-year-old accessory.

The G432 is worth checking out for its strong audio performance, versatile connections and reasonable price. On the other hand, the gadget's physical design hasn't aged all that well, and you can get better devices if you're willing to spend just a little more.

Remember the Logitech G430: plasticine and light, with loud blue highlights and a flexible steel headband? The G432 is just a slightly updated version of that. The ear cups are pleather rather than foam, and the blue flourishes are much more restrained. Otherwise, it has the same plastic feel and somewhat imprecisely notched headband.

There's a flexible, nonremovable boom mic on the front of the left ear cup and a volume dial on the back. There's nothing really wrong here, but the G432 missed a chance to keep up with rounder, sturdier, more modern designs.

What's more interesting is the sheer variety of connections the G432 offers. By default, you can connect the device via a single, 3.5-millimeter audio cable. But it also comes with a splitter for separate mic/audio connections, as well as a USB adapter. I'm not sure it was strictly necessary to include both of these connections, since the splitter and the USB adapter both work well for gaming PCs, but it's always nice to have more options.

The G432 feels comfortable enough, but a few tweaks would have made it better. The pleather ear cups don't press too heavily on the ears, but they do get hot, especially after you've been wearing the headset for a few hours. The first time I took the G432 off my head, I was surprised to find sweat beads not only on the ear cups but also on the foam headband. The ear cups also feel a little on the loose side.

The pleather ear cups don't press too heavily on the ears, but they do get hot, especially after you've been wearing the headset for a few hours.

I handed off the G432 to a co-worker, who agreed with my assessment, particularly about the loose feeling of the ear cups. However, he thought the pleather was agreeably supple and said that the headset felt easy to wear overall.

One area where the G432 delivered in full was its in-game performance — at least when attached via USB. The headset provided rich, programmable sound for PC games like Destiny 2, World of Warcraft and StarCraft: Remastered, with an excellent bass/treble balance and a soundscape that felt close rather than distant. Gunfire in Destiny 2, the techno music in StarCraft; and the sounds of battle in World of Warcraft all came through crisply and clearly.

I had a more mixed experience with the 3.5-mm cable by itself, though. The sound wasn't nearly as loud or nuanced on a PC when compared with the USB adapter, even when I played the exact same game. On a Nintendo Switch, however, the audio came through just fine, providing a reasonable balance between voice work, sound effects and music.

The headset provided rich, programmable sound for PC games like Destiny 2, World of Warcraft and StarCraft: Remastered, with an excellent bass/treble balance and a soundscape that feels close rather than distant.

The G432 can offer high-quality sound across the board, but you're going to get the best experience on a gaming PC. Take that into account if your primary system of choice is a console.

If you hook up the G432 to a computer via USB, you can tweak sound-profile options in the Logitech G Hub software. In addition to DTS 7.1 surround sound, you also get equalization sliders, noise reduction and a handful of other features. In my experience, the surround sound was a bit muddy and muted, while the stereo sound was strong and immediate, so there was not much reason to switch over. But the options are nice to have, if you want to experiment with various settings, or you have content that's optimized for surround sound.

The microphone is also perfectly suitable for multiplayer games, although it's not one of the fanciest models on the market by any means. Use it to communicate with teammates; don't use it for any kind of professional-grade audio recording.

MORE: 10 Cheap Gaming Headsets (Under $60) Ranked from Best to Worst

You can wring some impressive music performance out of the G432 if you're willing to tweak the audio options on a PC. But even without those tweaks, music sounds fine. There's a clear distinction between treble and bass, and high frequencies don't cause any distortion. The sound isn't as rich as anything you'd get from a dedicated audio headset, but for an $80 gaming headset, it's about as good as these things get.

On the other hand, the G432 is not going to become your everyday go-to headset anytime soon. It's large and somewhat bulky, and the microphone is stuck right where it is. However, the ear cups do swivel, so if you needed to stash this gear in a backpack on your way to a tournament, you could certainly do so.

Four years later, the G432 is a much better product than its predecessor, featuring much-improved audio drivers and a few smart tweaks in design. But a lot of the same drawbacks are present, including a cheap feel and an imperfect fit.

Overall, though, I think the G432 has more going for it than against it. Both music and game audio sound good, and it works right out of the box with any gaming system you own. The USB connectivity gives it a solid boost over some of its competitors, but if you want a simpler 3.5-mm experience, the G432 offers that as well.

If you're willing to pay a little more, the $100 HyperX Cloud Alpha sounds a little better and is just as functional; if you want to save a little money, the $70 SteelSeries Arctis 3 is comparable in both sound quality and versatility. Otherwise, the G432 might just be the right headset at the right price.