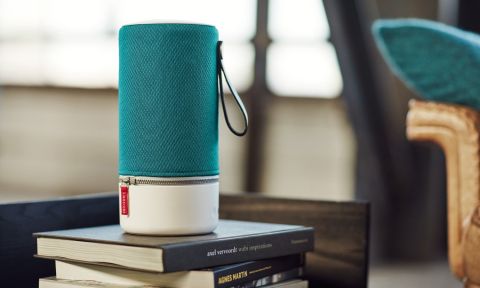 For a portable wireless speaker, the Zipp is packed with technology — including multiroom capabilities — and delivers well-balanced sound.

Names can be misleading. You may assume the Libratone Zipp's standout feature is the prominent zipper that allows you to remove the cover; it is not. What makes this $299  wireless portable speaker special is what's inside — Bluetooth, Wi-Fi and AirPlay along with multiroom capabilities help this cylinder stand out from the wireless masses and make it a contender for your home audio solution.

At 10.3 x 4.8 inches, the Zipp is large for a portable speaker. The $300 UE Megaboom is also pretty big at 8.9 x 3.3 inches, but it's easier to hold in one hand. The Zipp is too wide to comfortably grip it in one hand, but its leather handle takes care of that and makes transport easy. If you prefer a slightly smaller speaker, Libratone also sells the 8.8 x 3.9-inch Zipp Mini for $249.

The speaker is encased in a removable mesh cover — that's where the zipper comes in. You can buy other colors such as graphite, red or lagoon, for $29 each. Paired with a white top and bottom, the Zipp projects an air of understated quality. It doesn't look like a toy. Nor is it so boring as to blend into the background. It takes only a couple of minutes to change the Zipp's cover, but it's not as easy as switching hats and unlikely to be something you want to do frequently.

The Zipp's top-facing touch control panel offers a lot of functions in a small area. Tap the singing bird icon to play or pause a song; touch the angle brackets on the left and right side to repeat or skip. You can also initiate a connection with another Libratone speaker to sync playback from multiple sources (called a SoundSpace), or tap the heart icon to play an internet radio station that you've preset through the Libratone app.

Raise the volume by pushing a finger clockwise around the edge of the touch surface; push counterclockwise to lower it. If you want to quickly mute the sound, cover the bird with your hand. That's a lot packed into a 2-inch diameter circle. I like the idea, but Libratone could have made the touch surface larger. When raising the volume I frequently ended up touching the symbol to start a SoundSpace.

You can connect wirelessly to the Zipp via Bluetooth or AirPlay if you have an Apple device. It also has Wi-Fi for streaming internet radio stations. For wired connections, you can use a 3.5mm auxiliary input or a USB cable.

The list of features goes on: The USB port also functions as a charger, and the Zipp includes a speakerphone. The only thing Libratone left out was ruggedness; unlike the UE Megaboom, the Zipp isn't waterproof or shockproof.

The Zipp produces above-average sound quality for a $300 wireless speaker. It has better vocal clarity than the Megaboom, but weaker bass than the $300 Marshall Kilburn, our current favorite Bluetooth speaker for audiophiles.

The Zipp handles a variety of music well. Rihanna's vocals on Kanye West's "Famous" sounded full and the bass resonated with depth without sounding muddy; but the Kilburn thumped deeper and the vocals were warmer. John and Paul's voices on the Beatles' "A Hard Day's Night" were easy to make out over the jangly guitar chords on the Zipp, whereas the vocals weren't as clear on the Megaboom.

The Zipp made the extremely distorted guitars on Wilco's "Random Name Generator" sound suitably fuzzy but still distinct. Miles Davis' muted trumpet on "Round Midnight" was crisp and clear, as was Lindsey Buckingham's guitar fingerpicking on Fleetwood Mac's "Never Going Back Again."

With 100 watts of power, the Zipp gets loud enough to fill a large room. I measured the max volume at about 92 decibels, but it started to distort when I reached 88 dbs. The Kilburn reached 90 decibels without distorting, while the Megaboom sounded best at 85 decibels or less.

Libratone's app makes setting up a SoundSpace with multiple speakers as easy as any I've tried, including Sonos. You can pair up to six speakers in a group and have up to eight groups. That's more than I can imagine anyone needing, but it's still nice not to be limited. To set up a SoundSpace in the Libratone app, just drag the icon for one speaker onto another. Tap a SoundSpace to adjust volume levels for each speaker.

Once you've set up a SoundSpace, you don't need to use the app to stream music. Unlike with Sonos speakers, the Zipp will play any audio you can listen to on your phone — not just the services the speaker supports. However, Sonos edges out the LIbratone line with a better array of speaker options for the whole house.

To set up the Zipp, first download the free Libratone apps for iOS and Android, which walk you through connecting to your Wi-Fi network. Each time you power on the speaker, it takes almost 30 seconds to reconnect to your network before you can use it — a delay that quickly becomes annoying.

In the app, you can tweak the sound settings by picking an EQ setting such as Rock the House (extra bass) or Jazz Club (focus on vocals). If you want to make the speaker feel more like yours, you can name the speaker or change the color of the icon.

You can also pick five internet radio stations as presets. Once assigned in the app, you touch the heart icon on the speaker to change the station — you don't need to open the app at all. It's a nice touch that emulates some of the options that Amazon's Echo delivers.

The Zipp requires an AC charger instead of the micro USB connection that most portable speakers use. You'll need to remember the speaker's power cord if you're away from home for more than the 10 hours that the rechargeable battery can play for. In testing, I got closer to 9 hours before I needed to recharge. The Marshall Kilburn and the UE Megaboom can go for at least 20 hours without needing a recharge.

The Zipp's audio quality also applies to the speakerphone. The voices of people I spoke to sounded clear and full. The microphone on the Zipp made my voice much clearer than that of my iPhone 6S — something that's not always the case with the speakerphones on wireless speakers.

With multiroom capabilities, a variety of ways to play music wirelessly and a ton of other features, the Libratone Zipp is like the Swiss Army knife of wireless speakers. But it's got more than just tech going for it: It looks good, sounds good and is easy to use.

But like many products that include everything but the kitchen sink, the question remains whom the Zipp is the right fit for. There are better multiroom systems (Sonos), better-sounding portable speakers (Kilburn) and more rugged portable speakers (UE Megaboom). But if you want a portable wireless speaker with good sound, the Zipp hits the sweet spot.