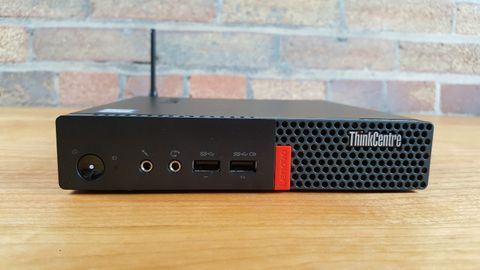 The Lenovo ThinkCentre M710q Tiny earns its name with a compact design, but it still offers solid performance, plenty of ports and a few clever accessories.

The Lenovo ThinkCentre M710q Tiny ($449 to start; $729 as tested) is just the sort of mini desktop you want for your office: small, capable and packed with all the ports you might need from day to day.

Lenovo's Tiny PC line has always been a study in how much PC you can fit into a 7-inch square chassis, but the current iteration blends the small size with the sort of power you'd expect from a larger tower. The result is the best mini PC for the office we've seen.

The ThinkCentre M710q has a simple metal chassis, with a front panel made of plastic. Lenovo adds a dash of flair with a honeycomb-patterned grille and a red Lenovo accent, but for the most part this is a compact black box. That makes a lot of sense, since the tiny size lends itself to being mounted onto the back of a monitor or the underside of a desk, putting your PC hardware largely out of sight.

If you want to keep it out in the open, Lenovo includes a small stand with the tiny PC. The stand is really more of a foot, a small plastic bracket that slips onto the side of the chassis and provides a little more stability when setting up the box on an edge.

The compact design continues one of the coolest aspects of Lenovo's Tiny desktop line, which is compatibility with its Tiny-in-One desktop display. The display has a built-in slot to integrate the M710q or any other member of the ThinkCentre Tiny lineup from the last few years, and convert the monitor into a modular all-in-one. If the lack of upgradability has stopped you from getting an all-in-one desktop, the Tiny-in-One is a very cool option to consider.

The ThinkCentre M710q packs a surprising number of ports into its tiny chassis. On the front panel, you'll find a pair of USB 3.0 ports along with 3.5 millimeter jacks for headset and microphone input.

On the back, you will find four USB 3.0 ports, a pair of DisplayPort video outputs and an HDMI port. A screw-on antenna is included for the 802.11ac Wi-Fi adapter, as well as a LAN port for wired networking.

Our review unit came with an Intel Core i5-7500T processor, 8GB of RAM and a 256GB Opal-compliant solid-state drive, with Windows 10 Pro preinstalled. Even with 10 tabs open and streaming both video and music, I didn't notice a bit of  lag as I browsed online.

The ThinkCentre M710q's 256GB SSD moved data quickly, copying a 4.97GB file in 30 seconds, which works out to 169 MBps. That’s faster than the HP Z2 Mini G3 (101 MBps) and the office-focused HP Elite Slice (96 MBps), and blows past the more pedestrian Ockel Sirius B Black Cherry (24 MBps). The addition of Opal compliance means that the drive is ready to use with self-encrypting data security.

Don't discount the M710q Tiny because of its small size – this is a serious office PC, and only the physical dimensions are small. The system's 2.7-GHz Intel Core i5-7500T processor and 8GB  of memory make the ThinkCentre M710q well-suited to the demands of office productivity. In Geekbench 4, which measures overall performance, the ThinkCentre M710q scored 8,010 points. That understandably falls behind such Core i7-powered PCs as the HP Z2 Mini G3 (15,287) and the HP Elite Slice (13,999). But the Lenovo still rides high above such inexpensive pocket-size PCs as the Ockel Sirius B Black Cherry (Intel Atom x5-Z8350, 4GB RAM), which  eked out only 2,283 points in the same test.

The same pint-size ThinkCentre M710q ripped through our spreadsheet macro test in quick time. In our custom OpenOffice spreadsheet of 20,000 names and addresses, it paired these thousands of data points in 3 minutes and 52 seconds, falling between the HP Z2 Mini G3 (3:30) and the HP Elite Slice (4:05).

The ThinkCentre M710q's integrated graphics are par for the course among mini PCs – the HP Elite Slice has similar Intel HD Graphics 530, while the Ockel Sirius B Black Cherry's Intel HD Graphics 400 is less powerful. The other end of the spectrum is the HP Z2 Mini G3 (Nvidia Quadro M620), which boasts workstation-grade graphics. The ThinkCentre M710q has the graphics chops for all of your day-to-day needs.

The differences are obvious when comparing benchmark scores from 3DMark Ice Storm Unlimited, where the ThinkCentre M710q scored a respectable 69,398, which was nearly doubled by the workstation HP Z2 Mini G3 (126,890). This isn't a machine built for gaming or for rendering complex 3D models, but it puts the ThinkCentre M710q in the same category as most standard office desktops.

Our review unit came with Windows 10 Pro preinstalled, though it can also be purchased with the standard Windows 10 operating system. For the most part, you get a vanilla installation of Windows, with a number of Microsoft apps included, like Skype and 3D Paint alongside Cortana and a sample version of the Microsoft Office Suite.

Lenovo includes a couple of its own utilities, such as Lenovo Account Portal (a single sign-on for all of its support and assistance services) and Lenovo Vantage (a dashboard for updating drivers, running diagnostics and getting app recommendations). However, Lenovo is quite restrained regarding bloatware in the M710q.

The ThinkCentre M710q Tiny comes in a variety of configurations, with customizable options for processors, memory, storage and software. The base model sells for $449 and comes with a low-powered Intel Pentium G4560T processor, 4GB of RAM and a 500GB 7,200 rpm hard drive.

Our own test model boasted an Intel Core i5-7500T processor, 8GB of RAM and a 256GB solid state drive, with Windows 10 Pro preinstalled. It retails for $729.

At the top end of the potential configurations is an Intel Core i7-7700T, 32GB of memory and a 512GB SSD with Opal compliance, all for $1,164. All of this is before the option of adding software, like Microsoft Office, and several Adobe programs, like Acrobat, Photoshop Elements or security software from McAfee or Norton which can add hundreds of dollars to the  price.

If you're after a compact office PC, the Lenovo ThinkCentre M710q Tiny desktop should fit the bill. The utilitarian design combines power and flexibility, giving you all the ports you need and a design small enough to tuck  out of sight. If you need more than the average office PC can offer, consider the workstation-class HP Z2 Mini G3 for a similarly compact system that boasts more potent graphics capability. But for most offices, the Lenovo ThinkCentre M710q Tiny desktop is the productivity machine you need.