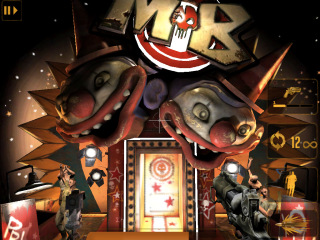 The Next-Generation of Smartphone Games is Here

Developers have been writing applications for the iPhone and iPod touch developers' program for a couple of years now, and the most popular sort of application they've tackled is the iOS game.

Most games on the platform are quite simple and casual, but now that there are millions of iOS-owners out there, the hardcore, traditional game developers are taking notice. Smartphones could eventually grow to be the biggest gaming market of all.

While flinging furious fowl at pigs is great for the casual gamer, some of us still crave hardcore games. Developers id Software and Epic Games are two of the most "hardcore" game companies in existence, and their engine technologies have powered some of the best PC and console games in the past decade. Now, both companies have diverted some attention to Apple's mobile platform.

In November, id Software released Rage Mutant Bash TV, and Epic Games just released is the Epic Unreal Engine 3-powered Infinity Blade this month. We'll take a look at both entries' use of the little PowerVR SGX 535 GPU in the iPhone 3GS/iPod touch 3g and Apple A4 package used in the iPhone 4, iPad and iPod touch 4g. Believe it or not, that little mobile GPU is more powerful than the Wii or any console from the previous generation (before Xbox 350 and PS3).

id Software's Rage Mutant Bash TV is available in two versions: the first is priced at $1.99 for high-resolution devices like the iPhone 4 and iPad, and another priced at $0.99 for the iPhone 3GS and iPod touch 3g. Both versions feature the same gameplay, but the difference is in the resolution of the game's textures.

Infinity Blade is available in a single $5.99 universal package that works on all the platforms mentioned above.

Even though the price difference between the two titles is significant, we think that they are both worthy of your gaming budget. Read on to find out why.