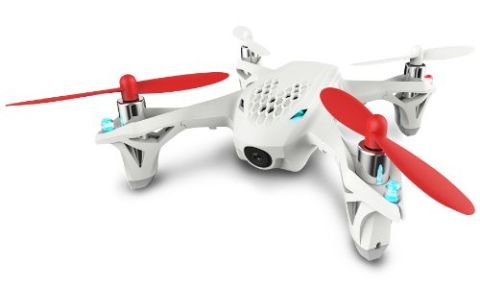 Aspiring drone racers will love the speed and maneuverability of the X4, as well as the cheap replacement parts.

Drone racing is a thrilling new sport where pilots send high-powered drones careening around courses at high speed, occasionally crashing spectacularly. The drones the pros use aren't cheap, costing hundreds or thousands of dollars. Fortunately, the popularity of drones means that you don't need to spend that much to get a taste of drone racing: a $120 drone like the Hubsan X4 H107D FPV is good enough to see if you have what it takes to be king of the drone track.

This speedy drone has a lot of power and maneuverability, packed into a tiny case that is cheap to fix when you crash (and you will). The quadcopter has a small camera on board, and a screen on the controller shows the video for a first-person view (FPV) from the drone. For the full racing experience, the controller also includes a video output so you can connect it to an FPV headset, such as the $600 Avegant Glyph, which really makes you feel like you're pod racing on Tatooine.

The 4.7 x 4.6 x 1.25-inch X4 is small, but the compact plastic case packs a 380mAh lithium polymer battery, a small camera and two radios — a 2.4-GHz radio that connects the drone and the controls and a 5.8-GHz radio that beams the video preview to the pilot.

The quadcopter feels very dense, weighing 1.5 ounces when it's ready to fly. The end of each arm houses a motor as well as blue and red LED lights that indicate the orientation of the drone. These lights indicate the status of the drone, as well as help you find it in low light. When the drone is connecting to the controller, the front blue LEDs blink. When the drone is ready to fly, all of the LEDs are solidly lit. When the battery is running low, all of the LEDs start to blink as a warning that you need to land.

The lens of the camera sits on the front of the body. It captures low-resolution 720 x 240-pixel video or 2-megapixel stills. The battery fits onto the back of the drone body, sliding between the electronic components. There is no on/off switch for the drone: you power the X4 on by connecting the battery cable, unplugging that cable to turn it off.

Four 2.2-inch rotor blades fit right onto the motors, held in place by friction. The two orientations of rotor are indicated by letters on the blades themselves: A for clockwise and B for counter-clockwise. Some drones that use a tight fitting rather than a bolt or screw tend to lose their rotor blades when they pop off during crashes. That didn't happen with the X4; the rotors stayed on the many times I crashed the drone.

If you are concerned about the rotors injuring someone or something, an included prop guard with a protective plastic rail fits onto the motors. But for serious racers, this will create some serious drag on your speed.

The X4 is small and light enough that it doesn't need to be registered with the FAA. The small size and weight also makes it relatively safe, as it's unlikely to injure anyone if it flies out of control.

The controller that comes with the X4 is rather large compared to the drone itself. At about 7.5 x 6.25 x 3 inches deep, the controller is a sizable chunk of plastic to carry around. But unlike the drone, the 1-pound controller feels light for the size, like it is mostly empty space. It's contoured to fit in the hand, with two grips on the back. That's important, because, without realizing it, you tend to throw the controller around a lot when flying at speed, especially when using an FPV headset.

The main feature of the controller is a large 4.3-inch LCD, which shows both the video preview and flight information such as the battery level of both the quadcopter and the controller. It also displays a timer for how long the controller has been turned on, and offers access to the on-screen menu of settings. The screen has a fairly low resolution, but it is bright and remains visible in all but the brightest direct sunlight.

You access the settings menu by pressing the right stick in for a second. That brings up features such as video playback, stick sensitivity and orientation and controller/quadcopter frequency. The latter is important if you are at a competition or are sharing a space with other fliers, as it means that each pilot can pick a different frequency in the 5.8-GHz frequency band that the X4 uses to send video back to the controller.

MORE: Drone Racing: How to Get Started

On the right side of the controller, you'll find a microSD slot, used for recording photos and video, but you'll have to bring your own card. The X4 can record video to SD, SDXC and HDSC cards up to 32GB in capacity. The low-resolution video captured by the X4 means small file sizes, so memory card capacity isn't a major issue: a 4GB card could hold several hours of video. On the left side of the controller are ports for outputting analog audio and video to feed into an FPV headset.

There is a lot of power in the X4, which translates into speed and maneuverability. But even though the drone can reach speeds of up to 10 mph, its power remains mostly under your control since the quadcopter responds quickly to the control sticks. The sensitivity level for these ranges from normal to expert, with the latter making the controls more sensitive, so any slight twitch of the control sticks will result in the drone moving. The controller defaults to the normal setting.

Pressing the left control stick sets the X4 into flip mode, where moving the right stick will make the quadcopter flip in the indicated direction. Like most small drones, this maneuver requires a decent amount of space, as it needs at least 5 to 6 feet of vertical space to recover. Try it any lower than that, and the drone will likely crash. Pressing the left stick in again exits the flip mode.

The X4 captures both photos and video, but you shouldn't expect much: the video is low in both resolution and quality. The drone records footage at 720 x 240 pixels, a slightly nonstandard resolution, and is rather blurry and soft. (Think cellphone video from several years ago.) The video is also prone to glitches caused by signal loss or interruptions, which show up as black lines on the preview, or the occasional jump in the generally smooth video preview.

We found that the video preview was mostly reliable out to about 25 to 30 feet away, which gives you a decent amount of space to fly in. Any farther than that, though, and the video begins to break up, quickly becoming unviewable. More expensive racing drones offer larger ranges, thanks to more powerful video transmitters.

One interesting and unusual feature is the X4's ability to play back video on the controller, which you can do from the on-screen menu. This could be useful if you are practicing a maneuver and want to figure out what went wrong, or if you got it right and want to show it off.

Because of that 720 x 240-pixel resolution, video does require some processing before you can edit or upload it to the internet. Although the footage looks fine on screen (or through an FPV headset), clips you watch straight off the memory card look squished, since it's half the usual vertical resolution. A program such as Freemake Video Converter can quickly fix this, doubling the vertical resolution to the more usual 480 pixels to produce an image that looks like a high-definition TV image. You aren't likely to mistake this for video from a more expensive HD-camera-equipped drone, though.

The controller for the X4 includes an analog video output. That means the video signal can be fed into a headset designed for drone racing, or any device that can handle analog video, including an analog-to-HDMI converter or a headset such as the Avegant Glyph. The X4 can also work with FPV video headsets that can wirelessly receive the 5.8-GHz video that the quadcopter sends, which includes the Fat Shark Spectrum Teleporter. That's important, because any signal processing steps between the drone and the pilot introduce a slight delay, which can mean the difference between successfully making a turn and crashing.

The X4 doesn't have an especially long battery life: We measured it at about 6 minutes. That's a couple minutes shy of most other small drones. But the small lithium polymer battery holds just 380mAh of juice, so that isn't a big surprise.

When the battery is running low, all the LED lights on the quadcopter start to flash, and you have about 20 seconds before the motors will cut out and the quadcopter will land (or crash, depending on where you are). These batteries are cheap and widely available, though, costing just $20 for six, complete with a charger that can handle four at once. The X4 comes with a USB charging cable and a single battery, which takes about 30 minutes to recharge from a standard USB port.

Crashes are pretty much inevitable with a drone like the X4. Sooner or later, sending this thing careening around is going to end with an unplanned encounter with a tree, the ground or another drone on a racetrack. So, like any racing drone, the X4 needs to be quickly, cheaply and easily repairable, and it succeeds on all three counts. Swapping out components — including the rotors, the case and even the motors — is simple. The rotors pop right off with the included tool, and are easy to replace. All of the components are pretty cheap as well; four new sets of rotors cost just $6, a new case is $6 and a set of new motors is just $10. It’s even cheaper if you buy a crash pack, which includes two sets of rotors, case, motors and a couple of spare batteries for $21.

MORE: What the FAA's Drone Rules Mean for You

The Hubsan X4 H107D is what those in the drone racing circuit call ready-to-fly (RTF), because it's not designed to be tweaked and it makes for a good set of training wheels for beginning pilots. Overall, it's a lot of fun to fly, offering serious speed and maneuverability in a small, cheap package. Spare parts are cheap, which is important for a drone like this that is going to crash a lot. The video quality will do for capturing your races in a first-person view, but don't expect crisp footage.

If you want sparkling video quality, splurge on a drone like the DJI Phantom 4 ($1,399). But if you want a drone that allows you to experience the thrill of racing without laying out a fortune, the Hubsan X4 is the way to go.