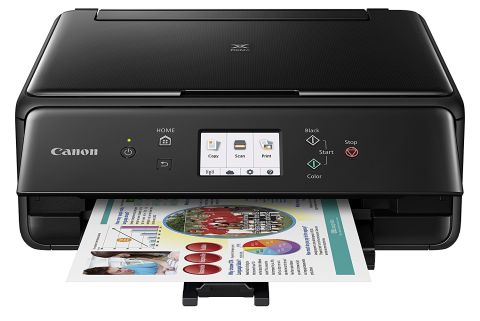 Canon touts the compact size of the TS6020. At 14.7 x 12.5 x 5.5 inches, the main body of this all-in-one is quite compact. But these dimensions don’t include the paper trays. Inserting the paper cassette adds roughly 1.5 inches to the depth; fold out the control panel at 45 degrees, and you add another inch. Pulled out at full extension, the output paper catch sticks out 9 inches from the main body. The second input tray, which you pull up and lean back, adds about 5 inches to the depth and roughly 7 inches to the height. Just be sure to include those when calculating your space requirements.

The control panel has a 3-inch color LCD and a few buttons. You use the touch screen mostly to navigate menus. Buttons labeled Black and Color start a copy or scan once you've chosen the mode in the touch-screen menu, but they don’t launch black-and-white or color copying or scanning on their own, and you cannot program them to do so, either.

I would have preferred more physical buttons, given that I found the touch screen occasionally unresponsive, requiring several taps to register an entry. On the plus side, within a menu, you can swipe up and down on a list without having to repeatedly tap an on-screen button.

The TS6020’s two paper trays let you keep two media types loaded, if you want. Both trays accommodate up to letter-size paper. By default, the printer asks you to register the paper size every time you remove the cassette or insert paper in the rear tray. It’s annoying, but you can turn off this alert.

You can connect the printer via USB or Wi-Fi. There is no USB direct print port for a thumb drive, nor is there a memory-card slot.

The TS6020 printed text documents very quickly, at 9.8 pages per minute. The TS6020 took just 30.7 seconds to print our five-page text document, besting the 38.2-second average time for other inkjet all-in-ones. The only model we’ve looked at that was faster was the Epson WF-2760, which printed the same pages in 30.2 seconds.

The TS6020 turned in the fastest color graphics time in its class, printing our six-page document in just 1 minute and 56 seconds, or 3.1 ppm, compared with the average of 2.4 ppm for inkjets. Most impressively, Canon’s all-in-one printed a two-sided document at about the average speed for one-sided prints, at 2.3 ppm.

Copies arrived quickly, whether in black-and-white or color. In both cases, the TS6020 was the fastest model to date. Black-and-white copies arrived in 9.4 seconds, well ahead of the average of 16.3 seconds for inkjet all-in-ones. Making color copies in 19.2 seconds, the TS6020 also beat the average of 29.6 seconds. The next-closest competitor was Canon’s own Pixma MG3620, which took 27.3 seconds.

At 10.4 seconds, black-and-white scanning on the TS6020 was in line with the category average. Color scanning at 600 dpi, however, was significantly faster than what comparable models achieved. The TS6020 made this scan in just 58.9 seconds, beating the inkjet average (78.4 seconds) while finishing only behind the Pixma MG3620 (39.4 seconds).

Print quality from the TS6020 was very high across the board. Text printed with very sharp edges, with an attractive heaviness to the letter forms. Graphics had a lot of detail, pleasingly saturated colors and smooth textures. Printing on high-quality inkjet paper improved the quality, making text nearly laser-printer quality, while giving graphics a little more color saturation and fine detail. Using the TS6020’s duplexer, however, causes text to print a little bit lighter than when you print one-sided. Glossy photos also look very attractive, with lots of fine details and natural-looking colors.

Color copies from the TS6020 were quite impressive, though some subtle details in dark areas got lost in translation. However, gray-scale copies of graphics were marred by rough-looking midtone transitions; they tended to reproduce a little too dark, with slightly speckled textures.

Scans on the TS6020 were of a very high quality, with richly saturated colors and fine details. The scanner was able to accurately reproduce subtle details in shadow areas.

The TS6020 uses both a pigment black ink (for plain-paper printing) and a dye black (best suited for glossy photos). For 4 x 6-inch glossy prints, the dye black ink will get you an estimated 376 prints, while the pigment ink sits relatively untouched and will last for roughly 2,305 photo prints. Conversely, the dye black-ink cartridge is rated to last for 1,795 plain-paper prints of mixed text and graphics, while the pigment black does the heavy lifting and lasts for just 300 pages.

The TS6020 was fast to start up, illuminating its touch screen for operation in just 4.5 seconds. That's the fastest startup we've seen. In comparison, both the Epson XP-420 and the WF-2760 started up in 6.9 seconds. This is not to say, however, that the TS620 will put a copy in your hand 10 seconds later. Initiating the copy function took roughly 15 seconds longer than normal; making a black-and-white copy took 24.6 seconds after first starting the TS6020, versus 9.4 seconds when the all-in-one was fully warmed up.

Setting up the printer over USB and Wi-Fi was straightforward. Print drivers installed properly, and network setup was intuitive and without hassle.

Canon offers basic printing and scanning software with the TS6020. I ran into trouble trying to get the scanning function to work on a Windows 10 machine, which a Canon support technician said might be due to security software interference. Similarly, I had trouble getting a large imaging software package called My Image Garden to perform scans on a Windows Vista PC. In both cases, the support technician steered me away from this software, and encouraged me to use the IJ Scan Utility, which worked fine (and which, I was told, should have been installed from the installation disc when the printer driver was installed).

The Pixma TS6020 offers a lot of bang for the buck, with loads of features and high performance across the board. Its image quality is very high. And although color printing costs are roughly average for an inkjet printer, text printing costs are low. Canon’s inkjet all-in-one provides the right mix of speed and quality for people looking for a do-it-all printer.