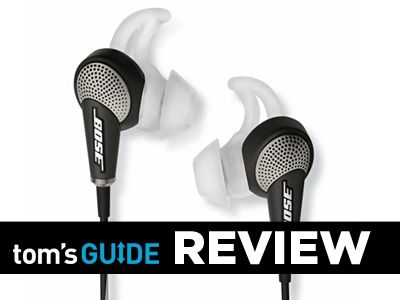 Supreme comfort and stellar anti-noise make the Bose QuietComfort 20i the noise-canceling buds to beat.

Bose's famously effective noise-cancellation technology has made its full-size QuietComfort headphones a huge hit. The QC20i offers the company's high-powered anti-noise system in a compact earbud form factor, though at $299, you'll need deep pockets. Audiophiles won't be too impressed with the heavily contoured sound, but Bose has raised the bar once again for noise cancellation, so if it's peace and quiet you're looking for, the QC20i earbuds deliver.

The lightweight, solidly built Bose QC20i earbuds are finished in muted tones of gray and silver, with sturdy cabling, an inline mic/controller and slim battery pack near the gold-plated stereo miniplug. The ear tips are made of squishy silicone and lock securely onto the earbuds; if you wad them up in your pocket, the ear tips won't come off easily, though they do pick up pocket lint. A soft fin on each ear tip nestles in the ridges of your ear to keep the earbuds secure without needing to be jammed way into your ear canal.

The inline controller sits in the middle of your chest instead of near your mouth, and the three buttons on the front control volume, playback and Siri on iOS devices. (The volume controls won't work with Android devices.) The Aware Mode button on the side of the controller turns down the noise cancellation and pipes in ambient noise via the mic on the back of the controller, in case you need to catch an in-flight announcement without removing the earbuds or stopping your music.

The gum-stick-shaped rechargeable battery pack near the cable's end lasts about 16 hours and takes 2 hours to charge fully via the included USB cable and either your computer's USB port or your iOS device's wall charger. At 3.5 x 1.5 x 0.5 inches, the battery is barely noticeable in your bag or pocket, and the rubberized coating makes it easy to grip when you're flipping the power switch on the side on or off. Two indicator lights keep you informed of the battery life and noise-cancellation mode. A small clip comes with the headphones so you can attach the cable to your clothing if you're moving around a lot.

Also included are three pairs of ear tips, as well as a carrying pouch. The Bose QC20 (minus the "i") has a mic/controller for non-iOS devices and is otherwise identical in performance and price to the QC20i.

The QC20i's silicone tips are so comfortable we could easily wear them on a long flight without a break. Even pressed up against a pillow, the earbuds didn't dig into our ears or go too far into our ear canals, which may make them a viable sleep aid for some users. Despite being nonintrusive, the earbuds stayed in place surprisingly well even while we worked out at the gym, though Bose makes no claims about the QC20i being sweat-resistant.

The QC20i's noise cancellation is better than on any other earbuds we've tested, which is especially impressive given the nonintrusive earbud form factor. Incidentally, with the noise-cancellation turned off, the earbuds block out very little noise on their own. Whether you're sitting in a crowded cafe, walking on a busy Manhattan street or flying the friendly skies, these earbuds do a phenomenal job of isolating you from engines and voices (and just about everything else you might run across) with just a barely noticeable hiss. Just keep in mind that the combination of anti-noise and music playing at a reasonable volume can cause you to miss important announcements over a PA system.

Thankfully, the earbuds continue to play music when their battery dies, which wasn't the case with Bose's previous noise-canceling products. With great noise cancellation, however, comes great battery drain: The 16-hour battery life doesn't match up well against competitors such as the AKG K391 NC (40 hours), Audio-Technica ATH-ANC23 (60 hours) and Phiaton PS20 (50 hours), but we're happy with the trade-off.

The QC20i earbuds feature the classic Bose sound signature — strong upper bass and highly contoured midrange — making these a poor choice for audio purists. But we found the sound pleasing enough for most music genres, keeping in mind that in noisy conditions, even the best headphones' sound will get partially washed out without strong passive or active isolation. Just don't expect these to sound nearly as accurate or lively as Bowers & Wilkins' C5 ($179) or even the AKG K391 NC ($199). Again, the QC20i's main selling points are comfort and noise cancellation, not audiophile-grade sound.

Hip-hop tracks such as Jay Z's "Holy Grail" sound clear enough, though deep bass sounds are somewhat lackluster compared with those on the B&W C5. Male and female vocals on rock and pop tracks such as Paul McCartney's "Only Mama Knows" and Jean Knight's "Mr. Big Stuff" come through clearly, but on acoustic jazz, the highs could use a bit more sparkle to keep cymbals and horns sounding lively.

Big-band and orchestral music from Maynard Ferguson ("MacArthur Park") to Wynton Marsalis (his "Classic Wynton" album of famous classical trumpet pieces) sound very good for casual listening, but the sense of space and detail won't hold up for more critical ears. Overall, the sound is satisfying, but if you're looking for serious audio quality, you'll want to check out the aforementioned models, none of which provide anywhere near the level of noise blockage found in the QC20i.

Without battery power, the earbuds retain most of the volume and detail as when powered, and call quality in both directions (with and without power) is a bit better than many of the mic-equipped headphones we've tested.

If you do a lot of traveling or spend a lot of time in crowded rooms with chatty neighbors, the Bose QuietComfort 20i are easily worth the $299 for the best comfort and noise cancellation around, and they're much smaller than full-size cans such as the Beats Studio or Bose QuietComfort 15. The B&W C5 ($179) and Klipsch X4i ($149) offer more accurate sound but only have passive noise isolation. Overall, the QC20i are hands-down the most comfortable and most powerful noise-canceling earbuds on the market.