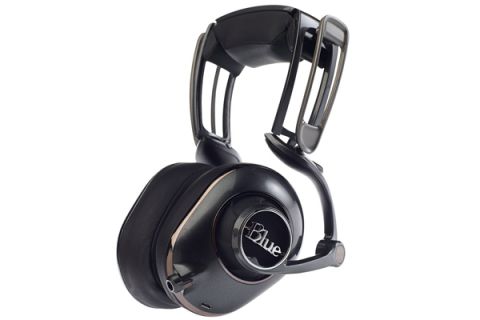 Blue's first pair of headphones, the Mo-Fi, delivers an artful industrial design with excellent audio buoyed by a built-in amplifier.

Blue Microphones, famous for its powerful USB recording devices, is entering the headphone arena. Targeting casual listeners, musicians and recording professionals, the company's $349 Mo-Fi headphones are the first to feature a built-in amplifier, which helps deliver audiophile-grade sound quality, no matter what they're plugged into. The headphones also possess a radical look, designed for comfort and style. It's truly a horse of a different sound and color.

The Blue Mo-Fi pairs glossy plastic with shiny painted aluminum to create a headphone frame that looks like it came from the fevered imagination of your favorite sci-fi writer. In reality, the cans draw their inspiration from the multi-jointed suspension of Formula One cars. The result is a headphone that easily adjusts to any head shape, ensuring a comfortable fit.

The top of the headband has a light-gray brushed aluminum panel embedded in a glossy dark-gray border. Toward the back of the band is the adjustable tension knob, which modifies the snugness of the fit. The band's underside is fitted with a thick slab of black leatherette-wrapped memory foam.

The sides of the headphones extend downward into a pronounced curve, accenting the large ear cups, which are designed to match the contours of the human face. If you look toward the bottom of the left ear cup, you'll find a microUSB port and an audio jack. A switch, which activates the headphones' three separate modes, extends up the side of the left can.

From the intriguing design to the inspired use of plastic and metal, the Mo-Fis are a beautiful pair of headphones. They're sure to stand out in a crowd for their futuristic, industrial look.

As slick as the Mo-Fi looks, all that aluminum can be a weighty proposition. The headphones weigh a hefty 16.4 ounces, making the 9.2 ounces Beats by Dr. Dre Studios feel featherweight by comparison. Weight problems aside, the Mo-Fi headphones have the superior fit.

The extendable ear cups wrapped around my ears in snug, yet comfortable ring of memory foam. The cans were initially too tight, but this was easily remedied with a few counter-clockwise turns of the tension knob at the top of the headband. I wore the Mo-Fi over a 2-hour period in total comfort, my ears protected from the unyielding din of the New York City subway system. They're not as comfortable as the Plantronics BackBeat Pros, but they're some of the best-fitting over-ear headphones I've worn.

Blue bundled the Mo-Fi headphones with two audio cables, both of which have a 1/4mm connector that fits into the headphone and a 3.5mm end, which fits into most devices. The first cable measures 47.2 inches and features a three-button in-line remote. I was disappointed to learn the remote was iOS-centric, but the device did allow me to skip tracks on my Motorola Razr Maxx HD and my HTC One M8 for Windows.

The remaining cable is 118.1 inches, so I don't imagine many people would attempt using it outside of the home. The additional length allows music lovers to plug into a high-end stereo system without losing the comfort of lounging on their favorite couch or chair. There's no in-line remote, so it's just you and your music.

Blue's Mo-Fi headphones are the first to feature a built-in audiophile-grade 240 milliwatt amplifier, eliminating the need for an external amp, which can range from $65 to $700 or more. As the name suggests, an amplifier augments the sound coming from your headphones, improving clarity and tone.

The Mo-Fi headphones feature three control settings for the amp: On, On+ and Off. On gives the volume a substantial boost without distorting the track overall. Those looking for a little more bass will want the On+ setting.

Keep in mind that because Blue is shooting for an audiophile-centric listening experience, you're not going to get the thumptastic lows that you'd normally hear on a pair of Beats or SMS headphones. Instead, you'll hear richer, fuller lows with more definition.

On songs that go light on the bass, such as Prince's "I Wanna Be Your Lover," you'll hear a small difference.

When plugged into my stereo at home, I found that the passive mode was all I needed. Audio was plenty loud and, while muddy in places, didn't prevent me from enjoying my relaxation playlist.

Blue has successfully transferred the excellent audio fidelity found in its mics to its headphones. Equipped with 50mm drivers, the Mo-Fi cans put on one hell of a show.

I started out with Santana's "Europa" in the passive Off setting with the HTC One M8 for Windows. The audio on the downloaded WMP file was loud, but I noticed Santana's electric guitar sounded muddy at some points and downright scratchy on higher notes. The organ was hard to make out, and the percussion wasn't as crisp as I was expecting.

All of my initial quibbles about the Mo-Fi got blasted away once I turned on its amp. It was like everything came into laser focus. The previously cloudy guitar was full and energetic while the organ chords added some subtle body to the track. I heard every beat of the snares, toms and bass.

The Mo-Fi easily outperformed the Beats Studio headphones, whose Active Noise-Cancelling (ANC) pumped out a noticeable hiss that made it sound like I was listening to "Europa" through a wall. Not only was the audio quality muddier than the Mo-Fi's, it sounded muffled and distant.

Since "Europa" isn't a bass heavy song, I didn't hear much difference when I engaged On+, which acts as a bass boost. However, I heard a noticeable jump in boom when I played Azealia Banks' "Chasing Time." Deep bass on the house-influenced number swelled. And for a brief second when I closed my eyes, I felt like I was in the club, dancing my troubles away. The Studios delivered a fair share of bass, but they lacked the clarity and detail produced by the Mo-Fi.

According to Blue, the Mo-Fi headphones can last up to 12 hours on a charge. During my time with the Mo-Fi cans, they lasted 8 days (2 hours a day set to On+ at medium volume). Once the battery finally conked out, the headphones simply switched to Off until the next time I found myself by a microUSB charger.

The Beats Studio headphones boasts 20 hours of battery life to support its active noise-cancelling technology. However, when the Studio's battery dies, it takes the music with it.

Blue successfully made the jump from high-quality USB microphones to headphones, and it looks good doing it. The $349 Mo-Fi has a mechanical industrial style guaranteed to turn heads in a world saturated with glossy, plastic headphones. More important, the built-in amplifier helps deliver audio that is loud, lush and crystal clear.

Overall, the Blue Mo-Fi headphones are great for audiophiles searching for quality sound with a unique look that can go from the studio to the street with ease.