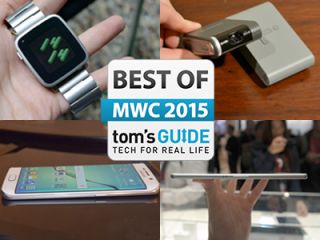 Drawing tens of thousands of attendees from around the globe, the Mobile World Congress in Barcelona, Spain, is known for offering a peek at the year's most exciting mobile innovations. The MWC 2015 was no exception -- we saw Samsung and HTC deploy slick new phones in their battle for Android dominance, and witnessed the debut of one of the world's thinnest tablets ever.

As expected, wearables were everywhere, with solid new smartwatches from the likes of LG and Pebble, as well as a surprise virtual reality headset from HTC that blew our minds. There was something for every type of mobile geek at MWC 2015. Here are our top picks.

Apple finally has a reason to be nervous. Samsung's Galaxy S6 Edge is a complete aesthetic overhaul of the company's flagship phone, sporting a premium glass-and-metal design and a stunning, subtly curved quad-HD display. The smartphone's typically excellent camera has become even brighter and more intuitive, and the device offers built-in wireless charging. Plus, the S6 Edge will work with Samsung's immersive Gear VR headset. Both versions of the S6 share the same great feature set, but, thanks to its eye-catching display, we say the Edge has the edge.

With the Lumia 640XL, Microsoft shows that value-priced phones can have premium features and design. For just over 200 euros (and a similar price in dollars) without a contract, the 640XL gives you a stunning 5.7-inch display, quad-core processor and 13-MP camera with Zeiss optics. Better still, the vibrant cyan, orange, white or black body makes this handset look more like a fashion gadget than a bargain handset.

Sony's Xperia Z4 slate is the world's thinnest and lightest waterproof tablet, with an arresting design that's even lighter than the iPad Air. Looks aren't all this sexy slate has going for it -- with a rich 10.1-inch, 2560 x 1600-pixel display and support for Digital Noise Cancelling and PlayStation 4 Remote Play, the Xperia Z4 is a compact multimedia powerhouse. Packing a 6,000-mAh battery that promises 17 hours of video playback, the Xperia Z4 is built to keep you entertained whether you're traveling abroad or spending all day by the pool.

The $299 Pebble Time Steel is the premium sibling of the new $199 Time that hasn't even hit wrists yet. The Time Steel includes the new Timeline OS, which breaks down your information and notifications in past, present and future views. You also get a premium all-metal body and a very impressive 10 days of rated battery life. Time Steel also makes use of Pebble's new smart strap platform, which lets developers make straps with sensors in them to add features to the watch.

This is the one Bluetooth controller to rule them all. Mad Catz' Surfr accessory is both a gamepad and keyboard for Android devices, cramming a full set of console-style controls as well as a complete QWERTY keyboard into one compact and cozy $60 peripheral. Surfr makes it easy to switch between gaming and browsing Netflix on your Android set-top box, and sports a dock for your smartphone if you want to play on the go.

MORE: Mad Catz Surfr: The Only Android Controller You Need

Now you can turn walls, ceilings and any other surface into a big screen for your videos, pictures and presentations with Lenovo's Pocket Projector. Its 854 x 480-pixel resolution shines up to 50 lumens and can create images up to 110 inches in size. The design of the Pocket Projector is particularly handy, letting you twist it a full 180 degrees to get the best angle, and both its sides have speakers to pump out the loud audio. Best of all, you can stream content to the Pocket Projector via Miracast or DLNA, making it easy to share without wires.

Who would have imagined that Taiwanese phone-maker HTC would release the most ambitious VR product on the market? Designed in concert with Valve, the Vive headset lets users immerse themselves in highly realistic virtual worlds for gaming, learning or virtual tourism. The device uses sensors to create a 15 x 15-foot space that the user can literally walk around and explore while manipulating virtual objects with handheld controllers.

When it comes to security, the eyes have it. Scanning for iris patterns is orders of magnitude more accurate and faster than reading fingerprints or using facial recognition. Fujitsu showed off a prototype phone that unlocked in under a second after we stared at the screen. The company may license its technology to smartphone makers in the near future.

MORE: Stare to Unlock: This Phone Scans Your Iris