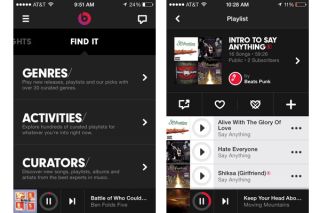 Apple's rumored music streaming service could aim to be the ultimate social network for musicians. According to a new report from 9to5Mac, the new Beats-based music app will simply be called "Apple Music," and will provide artists with a host of tools for connecting with fans.

9to5Mac reports that Apple Music will take inspiration from the company's now-defunct Ping social network, which let listeners follow artists and share their favorite songs. The new service may work in a similar way, but feature dedicated artist pages where musicians can post their songs, tour dates and videos all in one convenient location. Fans will reportedly be able to comment on artist posts, but won't have their own dedicated profiles.

Hints of this new music service can be found in leaked screens of the iOS 8.4 beta, which packs a new slider for "Artist Activity" in the Restrictions menu. 9to5Mac also reports that Apple Music will work in conjunction with the revamped iOS 8.4 Music app, and that Beats Music listeners will be able to carry over their virtual libraries.

Apple's decision to draw on Ping for inspiration is a curious one, given that it's one of the company's most notable failures of recent years. Apple launched Ping in 2010, but the social network failed to take off with users by requiring too much interaction with settings and offering too little in the way of music discovery. Apple shuttered Ping in 2012.

It's unclear whether or not the Apple-owned Beats Music app will continue to exist on its own, or whether it will be folded into Apple Music. Launched early in 2014, Beats Music puts a heavy emphasis on curation, with pre-made playlists from popular producers and music publications, as well as song suggestions tailored to your current mood or activity. Beats Music cost $10 a month for a premium subscription, and reached 15 million paid subscribers by the start of 2015.

We expect to learn a ton about Apple's new music service at WWDC 2015, which also may mark the debut of iOS 9, OS X 10.11 and a new Apple TV. The event kicks off June 8 in San Francisco; stay tuned for updates right from the show floor.