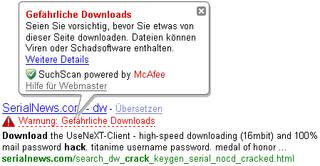 Yahoo and McAfee have announced a partnership that sees McAfee’s SiteAdviser technology directly integrated into Yahoo’s search results in an effort labelled SearchScan, which is being rolled out today.

McAfee SiteAdviser looks out for malicious websites, such as those pushing malware downloads and spam. Previously it could be integrated into search via a downloadable plug-in for certain browsers. Now Yahoo will feature it directly alongside search results, telling users if a site is safe or not, and dropping the most dangerous sites from search results altogether.

The deal is an exclusive one, according to Yahoo, though we can probably expect to see its competitors moving more and more in the direction of securing web search and keeping users out of harms way. Between widgets for web browsers and features directly built into browsers, such as anti-phishing filters, everyone is getting really serious about protecting users data, computers and, now as an extension of that, search results.