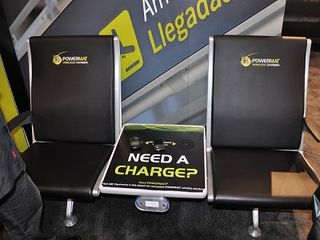 Tethering your phone to synchronize contacts is old hat, but you still have to plug it in every night. A wired network will always be faster than Wi-Fi, but in many cases you'll use the latter anyways so you won't be tied down. If we give up a little bandwidth to lose the network cable, why can’t we give up a little power efficiency to lose the power cable? Wireless power has been a promise for a few years now (if you know the pioneering work of Nikola Tesla, it’s been a promise for about a century), but how close are we to really being able to cut the cord? And what difference does it make if you don’t ever have to think about plugging in? Lastly, why are there so many different systems?

You can buy wireless power adapters for handsets and other devices, and wireless charging mats to put them down on, but they’re not all the same.

When electricity travels through a power cord it’s moving along the conductive copper (and into a battery through direct contact). Inductive charging creates an alternating electromagnetic field with a coil of wire  – like the charging base of an electric toothbrush, an induction hob or a wireless power charging mat – and a second induction coil that takes power from the field and converts it back into current.

Wireless power systems like Palm’s Touchstone charger, Powermat, Qualcomm’s WiPower and Fulton’s eCoupled (adopted by the Wireless Power Consortium under the name Qi and used in the Duracell charging mat) use higher frequencies and far thinner coils to achieve much higher efficiency. eCoupled and Powermat use tightly coupled near-field energy transfer; when using smaller coils, the device you’re charging has to be close to the charging point and on a specific spot. This isn’t just for low power; Qi goes up to 5W but eCoupled can charge something much larger than a phone and the Wireless Power Consortium is working on a standard for up to 120W.

One of our favorite wireless charging mats, the uPad, uses tightly-coupled inductive charging to recharge a wireless mouse (doing away with the usual wired docking station you perch the mouse on); turn it over and the other side of the mat is a small display that can show weather reports or news headlines – an accelerometer detects which way up you put it and powers that side. Sadly you can’t buy the uPad; it was produced by MSR Asia as an anniversary gift to celebrate the lab’s 10th anniversary in 2009 and Microsoft filed a patent in case it ever decides to produce them commercially.