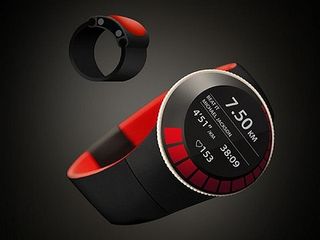 Designer Adrien Guenette has created an awesome watch concept that features a slick, minimal design that creates a perfect blend of cutting edge style and elegance. Not only does it watch look great, it also plays all of your favorite mp3 tracks! Unlike other watches and mp3 players, Guenette's concept is a cool new gadget that utilizes gesture movements in order to control the music.

Called "Beat", this watch is capable of displaying all of the information you need while exercising such as time, distance, heart rate and even gives you real time "voice feedback". The perfect gadget for use while exercising, "Beat" provides users with complete control at their fingertips, literally. Users wear a small ring in addition to the wristwatch that is able to detect and transmit gestures to the watch.

Although the gestures could become a bit troublesome or difficult to read while on the run, "Beat" is a great concept with a lot of potential to compete in the iPod dominated mp3 market.