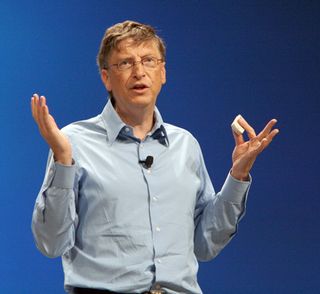 When Microsoft first announced the monster ad campaign people immediately assumed the adverts would be a rebuttal to the PC/Mac ads from Apple. We’ve all seen ‘em; young, attractive guy (Justin Long) who’s into “fun” stuff like music and movies and the stuffy suit (John Hodgman) who likes pie charts and spreadsheets. These suspicions were only reinforced when Microsoft announced that they were paying Jerry Seinfeld $10 million to star in the ads.

The first and second commercials featuring Bill Gates and Jerry Seinfeld aired to mixed emotions from viewers. Many accused the company of trying to be cool by mimicking Seinfeld. Seinfeld is famous for being a show about nothing and the ads certainly didn’t have all that much going on aside from the, “uh, what?” factor. Plotwise, they’re pretty abstract. Admittedly, the second ad was a lot better than the first, but it was still pretty weird.

Now it seems Microsoft is ditching the whole “advertise nothing and get them talking” approach in favor of something more traditional. In other words, “buy our stuff because all these people say it’s awesome.” Initial rumors suggested the company was adopting a more direct approach toward advertising in lieu of the Jerry and Bill Show, however a Microsoft spokesperson has said the company had always planned to use Bill and Jerry in the first two, as sort of teaser commercials for the real campaign.

So what’s the real campaign? Apparently the adverts are going to feature a whole ream of celebrities (like Eva Longoria) who use PCs and are happy with what they have (probably best seeing as how Seinfeld is portrayed as a Mac user in his show). The company is also going to have normal everyday joes, such as teachers and shark hunters feature in the ads. Aside from cashing in on the fact that the general public are sort of obsessed with celebrities, Microsoft plans to directly target the “I’m a Mac” campaign, which lets face it, is a little embarrassing for the PC. According to the New York Times, one of the new ads will see a Microsoft engineer who resembles John Hodgman introducing himself and stating, “Hello, I’m a PC and I’ve been made into a stereotype.”

It’ll be interesting to see how this approach fares out. While the last two ads have been really, really, strange, people have been talking about the ads and talking about Microsoft. A significant amount went from “Why is Microsoft trying to be cool? It won’t work,” to “Maybe it can’t be cool, but it can be weird and it kinda works.” We don’t know how good it will be for Microsoft to go from something completely different and off the wall, to just playing defense.

Check back tomorrow for the third commercial.