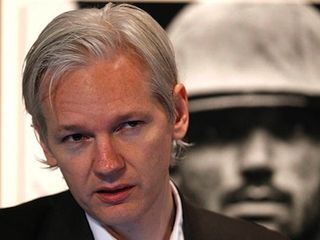 Julian Assange is arguably one of the most powerful members of the media right now. However, that's not to say he doesn't have the same problems the rest of us do: He sometimes has trouble getting a date. At least, that's how it looks, considering he apparently once turned to OKCupid for help.

Featured below are several images from what appears to be Julian Assange's own OKCupid dating profile. Obviously the authenticity of such an account is a subject of great debate. Under the user name HarryHarrison, the page shows several webcam pictures of Assange and has been out of use since 2006.

Speaking to Mashable, founder of the dating site Sam Yagan says he believes that the profile may be genuine. Yagan points out that 2006 was not a time when making a fake Julian Assange account would have been at the forefront of a prankster's mind as Assange had only just started Wikileaks.

Though the founder of OKCupid admits that someone who works at the company could have altered the time stamp internally, he seems skeptical.

No word on whether or not Julian got any dates from the site, but the fact that his account has been inactive for four years would suggest he has since decided to try his luck using other avenues. Still, he did manage to score 86 percent on "The Slut Test" and an 85 on the "Intellectual Sexiness Test." Rather fittingly, Assange also scored 86 on "The Thought Criminal Test," which aims to determine "how much of a threat you pose to the Party." All those impressive test results and you still can't tell the truth about your age, eh Julian?

Check out Julian Assange's OKCupid profile here. Do you think it's real? Let us know in the comments below!

[UPDATE] Oops! It looks like the OKCupid profile in question has been switched to private, though the time stamp still lists the last log-in as December 31, 2006. I took the liberty of creating a profile so I could nab a screenshot for you guys: