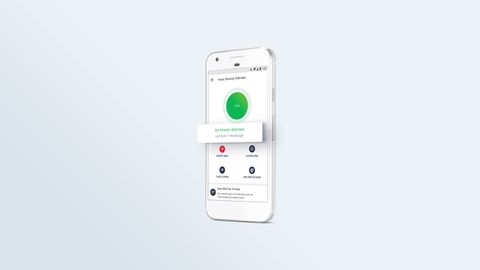 Get Avast Mobile Security if you want free Android antivirus protection with a lot of extra features and don't mind a lot of ads. But Norton's free version gives you tougher protection and fewer ads, and Bitdefender's cheap but full-featured paid plan is better yet.

UPDATED with most recent malware-detection test results. This review was originally published Oct. 10, 2019.

Judging by the download figures, Avast Mobile Security is one of the most popular Android antivirus apps on Google Play, and its average user rating has gone up slightly – to an impressive 4.6 out of 5 – since we last reviewed it in 2017.

The company has stuck to the same business model and design for the past few years, which has served it well. The app, called both Avast Mobile Security and Avast Antivirus Mobile Security & Virus Cleaner in Google Play, performs solidly in third-party malware evaluations and has lessened its system impact considerably.

With that said, if you are willing to pay for your antivirus solution, I would still lean instead towards Bitdefender Mobile Security or Norton Mobile Security, as both offer more consistent performance across the board among our best Android antivirus apps.

Avast Mobile Security remains a freemium app, with a fairly feature-rich free tier and the option to drop the ads and unlock the premium features in the "Pro" tier for either $2.99 a month or $11.88 a year. This is a slight price bump from the last time I reviewed the app, but it is still one of the least expensive paid Android antivirus options on the market.

Doing away with the ads is perhaps the most valuable piece of the Pro tier, but the anti-theft tools, app locking and tech support from Avast are all nice to have as well.

Users looking for an integrated VPN solution can bump up to the "Ultimate" tier for $23.88 yearly or $8.49 a month to use Avast's SecureLine VPN service. To add PC and macOS support for both the VPN and the antivirus software, you need to opt for the "Ultimate-Multi" plan, which costs $59.99 yearly or $27.99 (yes, that's right) monthly.

Avast continues to make malware scanning the focus of its app with the big green "Scan" button. While it isn't going to win any speed records, the full scan took between 26 and 32 seconds, rather than the 45 to 60 that it spent churning away during my last review of the app.

You can still schedule your scans for any time and any day of the week, so there's no reason for you to ever see an active scan during waking hours.

Avast's Web Shield held up well in the supported browsers that I had installed – Chrome, Opera, Firefox and Dolphin – and managed to detect and block links from known malicious sites.

Avast Mobile Security achieved perfect results in German independent lab AV-TEST's evaluations of Android security products conducted in July 2019. The app detected 100% of the 3,347 "real-time" malware threats used, and 100% of the 3,433 samples that had been uncovered in the previous four weeks.

This puts Avast well ahead of the industry averages for this round of testing, which were 96.8% of real-time, and 97.6% of recently uncovered, threats. Those averages were dragged down by the abysmal performance of Google Play Protect. But even with that outlier eliminated, Avast was still ahead of the pack.

Of the seven other Android antivirus apps that I reviewed in 2019, five submitted samples to AV-TEST for its July 2019 round. Bitdefender Mobile Security and Norton Mobile Security also achieved a 100/100 detection rate; right behind them were Kaspersky Mobile Antivirus and McAfee Mobile Security with 99.9%/100% detection.

Google Play Protect brought up the rear, with the lowest scores on both metrics among all apps in the test: 44.1% real-time detection, 54.7% widespread detection.

Looking back over the previous year of AV-TEST results, Avast scored perfect 100/100 twice, and otherwise maintained percentages of 99.7 or above. This is similar to the performances by Kaspersky and Bitdefender, and is a bit ahead of McAfee, but behind Norton, the only brand that consistently achieved a perfect 100/100.

The other two apps I reviewed in 2019, Lookout Mobile Security and Qihoo 360 Security Antivirus, last submitted samples to AV-TEST for evaluation in 2016. Qihoo 360 performed a bit below average, and Lookout performed especially poorly.

Anti-Theft
Avast offers an abundance of anti-theft features, but as was the case the last time we reviewed Avast Mobile Security, not all of them worked reliably. In theory, you can locate, mark as lost, trigger a siren, lock the device, get data, remotely wipe, and display a message on a phone or force a phone to call another phone. All these features are accessible via the web portal at my.avast.com.

I had consistent problems with the location feature, which would indicate that it could not connect to the device even when I was on the same Wi-Fi network as the phone. In an actual emergency, trying to get the command to go through would have been incredibly frustrating.

Call Blocker
As has been my experience every time I have reviewed Avast Mobile Security, this feature did not work at all. I blacklisted multiple numbers, but they were able to call my smartphone without issue.

This may be because Google has recently limited the ability of third-party apps to block calls or text messages. But as noted above, this didn't work two years ago either.

Photo Vault
This feature allows you to encrypt photos by moving them or sending them directly to the Avast app's photo library. If you have images that you don't want in your main photo app, this could certainly be useful. Note that you must then delete each photo from the main photo album on your device.

Wi-Fi Security
This feature scans the Wi-Fi networks you connect to and notes any vulnerabilities. If it detects a Wi-Fi network without an access password, the Avast app will recommend that you upgrade your paid plan to include Avast's VPN service; if you have done so already, you'll be able to connect to a VPN server with a single tap.

App Insights
This duplicates native Android features such as those found in Digital Wellbeing, but you may still want to use it if you like Avast as a one-stop shop for all of your device health. You can view the amount of time you have used each app, the amount of data each app used, and the permissions it requires.

Firewall (rooted devices only)
You can restrict internet access on a per-app basis, either to block an app from accessing the internet entirely or limiting it to connectivity when Wi-Fi is present. As I did not have a rooted device at the time, I was unable to test this feature.

Anti-Theft
While free users get most of the anti-theft features, there are three additional options for paid subscribers. I had better luck with two of these, SIM Security and remote recording of audio from my smartphone, both of which worked immediately.

The third, Camera Trap, is meant to take a picture of the individual who has your phone. When I tried to issue this command, I got a message saying it "could not have been processed because there is no face detection available in the device." I was able to fix it by unchecking a setting in my Avast web portal, but there was no language anywhere indicating this might be a potential problem.

App Locking
If you find yourself handing your device over to friends or your children at times, you can just toggle any apps that you want to lock, such as social networks, shopping apps or your photo gallery. Other users will be unable to access those without your passcode or fingerprint.

Avast SecureLine VPN
Avast SecureLine now matches the user interface of the rest of the Avast lineup. You can connect to VPN servers in dozens of different locations across the U.S. and around the globe. Almost all the functionality of the dedicated SecureLine app is mirrored in the Avast Mobile Security VPN screen, with the exception of the option to auto-connect to a VPN.

The stand-alone VPN app costs $3 a month or $20 per year, so getting the VPN service for an additional $12 per year as an Avast Mobile Security add-on will save you a bit. Buying the VPN service add-on monthly actually costs an extra $5.50, which doesn't make much sense.

To evaluate the impact of running Avast Mobile Security on my device, I conducted multiple tests using the Geekbench 4 Android tool on my Google Pixel 3 running Android 9.0 Pie. First, I established a baseline performance for the device, and then ran additional tests following installation and during a full scan by the antivirus app.

After installing Avast Mobile Security on my Pixel 3, my performance dropped by only 3.53%. A full scan had nearly triple the impact, reducing system performance by 9.96% from the baseline score.

This was a dramatic improvement for Avast, which finished dead last in both categories when I tested it in mid-2017. The app still came in at fifth place out of eight this time on the post-installation performance test, but was just a few percentage points behind third-place Lookout. On the full scan, Avast was in sixth place out of eight, but the numbers were far better than the nearly 25% impact from 2017.

Avast remains one of the least convenient antivirus apps to get up and running, due to the number of features available in the app and the lack of any real guidance following installation.

Fortunately, the app hadn't changed much since I last reviewed it, so I was able to make it through the setup in about 6 minutes, but I wouldn't be surprised if a new user would take twice as long, as you are mostly left to tap around the app and find which feature to activate next.

Free users of Avast have to rely on the forums and support documents on Avast.com for tech support. The ability to actually call or email customer service 24/7 in the event of a problem is definitely one of the perks of a paid subscription.

The Avast interface has basically not changed since my last review of this app, which isn't surprising as it had just undergone a complete redesign in 2017. Screens either feature a simple white background or a color gradient. The app does a solid job with large touch targets for all of the primary functions, which are visible immediately when you launch the app.

Things are a little muddier if you use the free version. I find the ads and prompts to upgrade so irritating that I would definitely spend the yearly $11.99 to get rid of them, but if you can mentally block out the ads, there aren't really any significant interface differences.

Avast Mobile Security always teeters right on the edge of being a compelling option for me, but the inconsistent performance of some features, coupled with my frustration with the placement and frequency of the ads in the free version, always makes me shy away from unreservedly recommending Avast among our best Android antivirus apps.

If you can ignore the ads and don't need the flakier features, then you might be happy with Avast. The app has unquestionably solid malware protection, so you aren't giving up much there. If, however, stability and other forms of security and privacy are your primary goals, you should opt for Bitdefender Mobile Security or Norton Mobile Security.