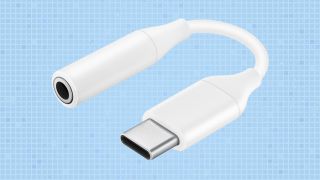 Images of Samsung's upcoming 3.5mm to USC-B dongle have leaked online, essentially confirming the South Korean smartphone maker has joined the likes of Google and Apple in axing the headphone jack on its upcoming Galaxy Note 10 smartphone.

SamMobile released the set of photos earlier today (Aug. 1), reporting a dongle will most likely accompany the Galaxy Note 10 and Galaxy Note 10+ in the box when the phones are unveiled at next week's Samsung Unpacked event on Aug. 7. The images expose a hardy doohickey with a USB-C jack on side and a 3.5mm audio input on the other. It seems thicker than the Apple dongle, which act as an extension as Apple's wired earbuds.

If you're a fan of Bluetooth headphones or wireless earbuds the dongle doesn't really matter. But this news comes a disheartening blow to anyone who still relies on a 3.5mm headphone jack to plug in headphones and has celebrated Samsung's decision to preserve the headphone jack on its flagship smartphones.

While some of the zillions of Galaxy Note 10 leaks have implied Samsung was done holding out, this dongle of death all but ends the headphone jack era. RIP.