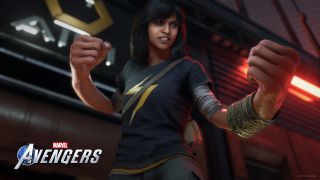 The Avengers game now has its sixth Avenger: Kamala Khan’s Ms. Marvel. And not only that, this Pakistani American Muslim girl from New Jersey is none other than the protagonist of Marvel’s Avengers (hell yes!).

I got to play as her in a demo during New York Comic Con 2019, and you know what? She’s the best Avenger yet.

Here’s what it was like to stretch my way to victory in Marvel’s Avengers as Ms. Marvel.

The demo threw me into a simulation training room that required me to get through 15 waves of combat. Unlike in the San Francisco demo, I fought against AIM’s agents, which include Keepers, several different kinds of murderous robots I didn’t catch the name of and angry dudes in giant exosuits.

Ms. Marvel is everything that you could imagine. Even while I was 10 feet away, I slapped my enemy so hard upside the face with my elongated hand that his will to live was destroyed.

The way that Ms. Marvel attacks and dodges feels so fluid. Stretching my hand out to grapple and jump onto taller platforms felt so natural. Her light attacks are long horizontal swings, while her heavy attacks drop down her car-sized hands down onto an opponent. When I held down light attack, I execute a badass combo that launches the enemy and myself into the air.

My favorite moment was when I used my hero ability to Embiggen and grow myself to the size of a giant mech I was fighting. I used another ability to extend my right hand forward, grabbing them, and continuously extend until my hand slammed them against the wall on the other side of the room. Ms. Marvel also has an ability to bring herself back up to full health, which was incredibly useful.

Despite that, I still have issues with the combat, and it's not limited to Ms. Marvel’s gameplay. Even with her extended hands and badass movement, the flow of combat was difficult to keep up. It was a combination of -- well, me being bad, but also the game not giving me the ability to swiftly get to my enemies in a fast enough time. This issue is that this game falls somewhere between an action game and a beat-em-up. A game like Spider-Man is a beat-em-up, as it relies on you keeping your combos up. There’s no combo-meter in Avengers, so there’s no incentive to defeat your enemies in a timely or stylish fashion, but the combat almost feels like there should be.

Regardless, I could literally play a whole game based on Ms. Marvel.

As I mentioned earlier, Kamala Khan is very much the protagonist of this story, as you’ll be watching it unfold through her eyes. You can even catch her narrating in the trailer for Marvel’s Avengers, as she was in San Francisco for A-Day.

Crystal Dynamics previously revealed that AIM was going to be the main antagonist in this story, but now it makes much more sense, with Ms. Marvel taking the lead. Kamala Khan is a fan girl, and she idolizes super heroes, while AIM believes in putting their faith in science over super heroes.

Kamala Khan unlocks AIM’s conspiracy and seeks to prove that people with power belong in this world. And it’s because of her that the Avengers get back together after five years of sulking away.

I did get to see a few scenes with her basically annoying the heck out of Bruce Banner, as well as a brief interaction with her and Tony Stark. Overall, the scenes with her take a less serious tone and lean toward the campier side of Marvel stories, which I was happy to see.

Unfortunately, I didn’t get to test out the co-op in Marvel’s Avengers, but I did get to see some clips of players wrecking shop together, which was neat.

According to Crystal Dynamics, there will be more co-op details to come early next year, and was assured that there will be "multiple years" of support for Marvel’s Avengers at no additional cost, including new Heroes and Regions.

We also discussed loot box mechanics, and the company says it wants no part in them. But there will be the option to buy exclusive outfits (purely cosmetic) in the in-game marketplace with real money.

Well there you have it: the sixth Avenger, Ms. Marvel, is here out here, representing and kicking ass as the hero of a AAA game.

While I do have some issues with the combat, I am still so damn excited for this game. Finally, a fully fleshed out action game that Marvel’s heroes deserve.

You can pre-order now to get beta access (PS4 owners get it first). Otherwise, stay tuned for our full review when Marvel’s Avengers drops on May 15, 2020 on PS4, Xbox One, PC and Google Stadia.