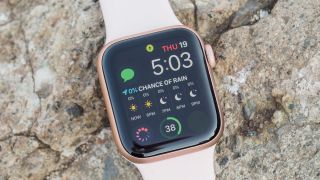 The latest Apple patent may offer a glimpse at what is coming to the Apple Watch Series 6: TouchID on the display and moving the antennas out of its body and into the wristbands. Both moves make a lot of sense.

Unearthed by Patently Apple, the patents filed with the United States Patent and Trademark Office first talks about removing the watch Wi-Fi and LTE antennas out of the watch body and into the wristbands.

The paper describes “stretchable antenna elements” that will be embedded in the bands so they are protected from the battering of daily usage. The antenna assemblies, Patently Apple points out, will “adaptably stretch, bend, and flex with the bodies of the watch bands” avoiding any potential damage while keeping them comfortable for the user.

In theory, this will also provide better antenna performance, as Apple can choose to make them bigger, boosting its signal reception capabilities.

The patent also talks about the display, pointing out that it has TouchID capabilities. Right now, the Apple Watch doesn’t have any independent biometric unlocking mechanism. You can use an iPhone with Touch ID and Face ID to unlock it — as well as a passcode. The unlocking uses a Bluetooth connection.

This is not very convenient, so the Touch ID on the watch’s screen will be a very welcome addition — especially for users of the LTE models who want to leave their phones at home. This will allow you to both easily unlock the watch but also to use Apple Wallet without the hassle of having to introduce a passcode.

Based on our testing, the Apple Watch 5 is the best smartwatch you can buy, but it's not a huge upgrade over the Series 4, with the exception of the always-on display and built-in compass. Adding Touch ID will make it easier to get into your Apple Watch and go on your run with the AirPods, making the watch feel less like an accessory.