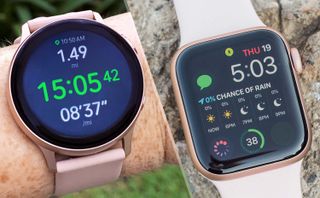 The Apple Watch has become ubiquitous. New models launch every fall with advanced new features that no other company has been able to match, making it the best smartwatch you can buy. Until now.

Which watch is worth buying? Read on to see if Samsung has finally taken Apple’s crown.

The Galaxy Watch Active 2 starts at $279 for the 40-millimeter aluminum Bluetooth model and $299 for the larger 44mm version. A stainless steel option starts at $379. If you want cellular connectivity, you’ll have to pay a premium: $429, to be exact. (The LTE model only comes in a stainless steel finish.)

Still, that’s much less expensive than the Apple Watch Series 5, which starts at $399 for the 40mm aluminum Bluetooth model and $429 for the 44-mm version. For cellular connectivity, add an extra $100 for both sizes.

Both the Series 5 and Galaxy Watch Active 2 come in two sizes, 40-mm and 44-mm, which are well-sized for both small and larger wrists. The Apple Watch is a rounded-off square — a miniature iPhone on your wrist — whereas the Galaxy Watch sports a fully round case and screen, like a traditional watch.

Both watches sport beautiful OLED displays that are easily viewable even in bright sun while running outdoors. The Apple Watch’s screen is a little higher-res (448 x 368) than the Galaxy Watch (360 x 360), but I don’t find the difference noticeable.

Overall I prefer the look of the Galaxy Watch Active 2, which can be dressed up or down depending on the occasion with an interchangeable band. The Apple Watch looks distinctively like an Apple Watch, which is a turn-off for some people. (Though it can also be dressed up or down, with premium options like an Hèrmès leather band.)

The Apple Watch has long been one of the best fitness-tracking smartwatches you can buy. With the Apple Watch Series 4’s FDA-cleared ECG sensor, which is capable of diagnosing atrial fibrillation, Apple raised the bar.

Samsung is nipping at the company’s heels with an ECG sensor of its own, but the Galaxy Watch Active 2’s feature isn’t yet functional. (Presumably because the company needs to submit data supporting its accuracy to the FDA.)

The Galaxy Watch does offer built-in sleep-tracking, which the Apple Watch doesn’t. (You can, however, install a third-party tracker.) The Galaxy Watch’s sleep logs aren’t 100% accurate, but at least that watch can last through the night on a charge.

The Series 5 has a few health features that users might find more useful than sleep-tracking, including fall detection (which alerts your emergency contacts if you hit the ground) and alerts when your heart rate dips too low or spikes suddenly when not working out. These features have already saved lives.

When it comes to fitness, both watches offer automatic workout-tracking when you forget to launch an exercise, automatic run-pausing and water-resistance for swim-tracking. The Galaxy Watch also has built-in running programs for boosting endurance and speed, but a limited selection of third-party workout apps. Apple has a plethora of big-name exercise apps in addition to its own advanced native Workout and Activity apps.

Samsung has always prioritized battery life in its smartwatches, and the Galaxy Watch Active 2 is no different. The watch can last 36 hours with its always-on display activated, and up to three days without it.

The Series 5 lasts just 18 hours on a charge, due to its always-on display, and a little more than a day without it turned on. That’s in line with previous generations of Apple Watches, but ideally Apple would extend the watch’s battery life to make it more useful for, say, sleep-tracking.

Samsung developed its own smartwatch operating system to free the company from Google’s Wear OS platform, which allows it to make design decisions like the physical rotating bezel (now a digital one) and extend its watches’ battery life. But that decision came with a trade-off — namely, that few major apps have a Tizen OS version. There are a few big names, though, including Spotify, which allows you to store playlists offline with a Premium subscription.

You can’t store Spotify playlists offline on the Apple Watch, but if you subscribe to Apple Music, you can stream and store playlists there.

Apple Watch has Samsung beat when it comes to app selection. From social networking and productivity apps — including a native Calculator that can break down tip percentages and split bills for groups — to streaming audiobooks and maps. And now all Apple Watches, including the Series 5, have an independent watch App Store so you can download apps directly on your wrist.

Android owners have no choice but the Galaxy Watch Active 2 — Apple Watch simply doesn’t work with Android phones. Samsung’s watch is compatible with both platforms, though you get more features with Android devices (for instance, the ability to respond to text messages).

For iPhone owners, the question is: Do you want to be locked to Apple’s platform, or do you want to move freely between iOS and Android? For most, the clear winner is the Apple Watch, but OS-agnostic folks will have to decide which makes sense for them.

It’s about time Apple had a worthy challenger, even though the Series 5 is still the smartwatch to beat. Other companies aren’t trying to catch up with, let alone rival, the Apple Watch’s features. Samsung just proved that it’s taking smartwatches seriously, which makes it a true contender.