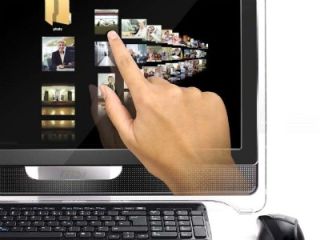 Get Your Grubby Hands On These All-In-Ones

I tried reading the news online, but my 5-year old beast of a kitchen PC, but it wasn’t up to the task. Next up was an iPad. I liked being able to move around the New York Times’s needlessly crowded Web page by moving my finger on the display, but the screen was just too small.

At that point, I decided it was time for a new family PC and called a family meeting to create an instant marketing focus group with my wife and two sons. I decided to leave out “Slowy,” our Golden Greek tortoise, because he never has much to say on computers – or anything for that matter.

When we were able to stay on the topic, our wants and needs actually complemented each other nicely. My wife was concerned that the new computer would look good in the kitchen, my younger son desperately wanted to use a touch screen to play games on and my older son just wanted to be left alone.

It came down to this: we decided to replace the PC with a touch-computer that has a screen large enough for to play games and read the morning papers on. It needed to have a built-in display and speakers, a mid-range processor and enough hard drive space for the flotsam and jetsam of a family that’s trying – unsuccessfully so far – to live a digital lifestyle.

Touch computing appeals to me because I could scroll through a site, click on something with the touch of a finger or zoom in on an image by squeezing two fingers together or rotate an image by pivoting the forefinger around the thumb.

The pen might be mightier than the sword, but I was hoping that the finger was mightier than the keyboard. I knew my 10 digits could only take me so far on Web journeys or in helping my 13-year old with his math or French homework, so I insisted on having a wireless keyboard and mouse for when touch wasn’t enough.

The hedonist in me also wanted a built-in TV tuner so it could double as a kitchen television that could record the shows we’d miss while we were enthralled with the touch screen. I figured the budget was about $1,200, but I could go higher if the right system that could do special things came long.

More than anything else, the PC needs to fit on a small desk in a kitchen nook. That turned out to be no big deal, but the computer would be out in the open in the most public room in my home and I wanted one that looked like it fit in and that I wasn’t ashamed of.

After looking them over, running Passmark’s Performance 7.0 benchmarks, measuring how much power they use and playing several games, we – of course – spent a lot of time touching them. We played games, maneuvered between Web sites, manipulated excel spreadsheets and even finger painted.

I’ve come to the conclusion that touch computing has arrived. They all have supple touch screens that respond quickly to the touch of a finger. To my mind, it’s like eating French fries. Using your fingers makes for a more efficient way to eat them as well as to work or play with a computer.  For instance, using Google Maps is a matter of just moving your finger on the screen to zoom in and out and not fussing with the mouse to get the right map on-screen.

On the downside, each of the screens picked up more fingerprints than an episode of CSI: The Kitchen. In fact, after my son ate a bag of potato chips, the screen looked greasier than the Louisiana coast during the Deepwater Horizon oil spill. Happily, the screens are easier to wash down than the beach was.

Each of these all-in-one PCs came with a 1,920 by 1080 resolution display and BluRay player for showing full high definition material as well as wireless keyboards and mice for when touch isn’t enough. All of them had both wired and wireless data connections as well as Web cams.

A big bonus for the cheapskate in me is that they each used a lot less power than the kitchen’s present antiquated PC, which consumes 200 watts. This can cut the computer’s part of my power bill, something I can’t argue with.

Each of the three stood out from the pack for different reasons. While the AE2420 was the most powerful and had a cool 3-D screen, it was over my budget and was a little too garish for our tastes. By contrast, the Asus was the cheapest and it offered a way to adjust its performance while the Gateway had the most appealing design, included a TV tuner and had a thoughtful light underneath for nighttime typing.

One thing none of them can do is lay down, as is the case with HP’s TouchSmart 610 which wasn’t available in time to be included on my shopping list. Rather than always standing vertically, the TouchSmart’s unique stand can go horizontal when you want to work over the screen rather than in front of it. It works really well for digital finger painting, but I doubt it would fit onto my desk.

As a family we know what we want and are not interested in settling for second best. We picked one that was just right and satisfied all our needs. Which one was it? You’ll have to read on to find out.