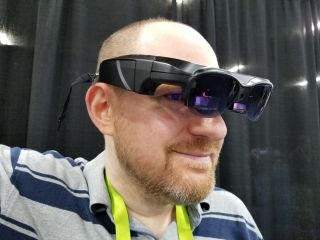 There's a great scene in the original Terminator movie where Arnold Schwarzenegger's killer robot looks at a biker, and the android's internal display shows that the guy's leather jacket is just the right size for his own cyborg body. Later, the Terminator looks at a motorcycle and identifies its exact make and model with a glance.

While I don't particularly want to become a soulless killing machine, the idea of getting Terminator-like information superimposed on my field of view has been a long-held dream of mine. As such, I was really excited when I got the chance to try on ThirdEye's X1 Smart Glasses, which use augmented reality to perform any number of tasks, including recognizing individual people by their faces.

The product of Princeton, New Jersey-based technology firm ThirdEye, the X1 Smart Glasses feature dual-eye, 720p lenses that provide a truly immersive experience. They're a far cry from the tiny Google Glass screen, though, which floated above one eye.

The camera can capture 13 Megapixel images or video at up to 4K resolution. The dual batteries, which are located in the arms, promise a reasonable 6 to 7 hours of battery life. The glasses weigh just 9 ounces, and offer both Wi-Fi and Bluetooth connectivity. They charge via a USB-C port, and possess a microSD card slot for storage.

The X1 Smart Glasses run a modified version of Android that ThirdEye developed itself. The company also plans to launch its own app store.

Though executives said that the company plans to target everyday consumers at some point, the product is currently being positioned as a custom solution for specific business, education and healthcare uses. ThirdEye will not only sell these customers the glasses, but also develop software for them.

The company has already made a facial recognition app that allows Alzheimer's patients to put on the glasses, and see the names of their loved ones superimposed over the actual people. I could see this coming in handy at large events, where you can't remember all the names of people you've run into before.

Company reps also said that the X1 Smart Glasses have benefits in the education market, where remote students can interact with their teachers using AR. They also said it would be a good tool for tourists, who can walk around a location, look at points of interest and obtain more information about what they see.

When I tried them on, the X1 Smart Glasses fit comfortably on my face. The soft, padded arms were very gentle on my ears, and the bridge slid into position on my nose without causing any problems. The demo unit I tried seemed a bit fragile, so I wouldn't recommend wearing them to a racquetball game.

The demo device was running the company's facial recognition app. As I looked at my coworker, a box appeared around her face, telling me that there as a 92 percent chance that she was a person. If she had been in the device's facial recognition database, the glasses would have shown her name rather than "person."

ThirdEye says that it has shipped a limited quantity of the X1 Smart Glasses to a few early partners for testing, but that it plans to produce and sell more units later this year. Because it varies by use case, there's no definitive price for the product, but a company rep said that it would probably cost around $1,000 for individuals to buy, without any custom software development. You can learn more or place an order at ThirdEye's website.