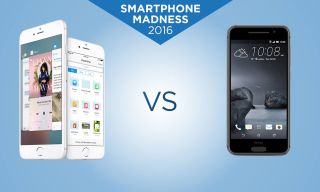 Editor's Note: Voting is complete in this match-up, and the HTC One A9 is moving on to the Final Four. HTC's phone captured 65 percent of the vote, coasting past the 35 percent share earned by the Apple iPhone 6s and 6s Plus. The One A9 awaits the winner of the Google Nexus 6P and 5X/BlackBerry Priv showdown which takes place later this week.

After a first round that saw its share of upsets, commanding victories and even a buzzer-beater or two, Smartphone Madness rolls into the second round. Eight phones are still standing, hoping to take home the title. But you have the last word on who claims the crown.

Voting in the first round wrapped up yesterday (March 22), with the Microsoft Lumia 950 and 950 XL claiming the final spot in our quarterfinals, with 71 percent of the vote over Motorola's Droid Turbo 2. The Lumia phones join the rest of our Aristocratic Eight: Apple's iPhone 6s and 6s Plus, Samsung's Galaxy S7 and S7 Edge. Google's Nexus 6P and 5X, Alcatel's Idol 4 and 4S, HTC's One A9, Xiaomi's Mi5, and the BlackBerry Priv.

Our first quarterfinal match-up features the pre-tournament favorite, Apple’s iPhone 6s and iPhone 6s Plus, facing off against the HTC One A9. Apple breezed into this round with 82 percent of the vote in its victory over Acer’s Liquid Jade 2. The HTC One A9’s first-round win was almost as convincing, as it bested the Huawei Mate 8 with 79 percent of the vote.

Apple’s iPhones hope to reach the Final Four on the strength of 3D Touch displays that can detect different levels of pressure to summon up previews and shortcuts. But the iPhones’ secret weapon may be the A9 processor that powers both the 6s and the 6s Plus, putting those phones near the top of most performance benchmarks for smartphones.

MORE: Read Our Review of the iPhone 6s and 6s Plus

If the HTC One A9 is going to cut the iPhone 6s and 6s Plus down to size, it’s going to do so on the strength of its design. HTC’s tried to out-iPhone the iPhone with a rounded design that might fit right in inside an Apple Store showroom.

MORE: Read Our HTC One A9 Review

Which phone earns a spot in the Final Four? The polls are now open, and you’ve got until 9 a.m. ET tomorrow (March 24) to get out the vote for the iPhone 6s and 6s Plus or the HTC One A9.