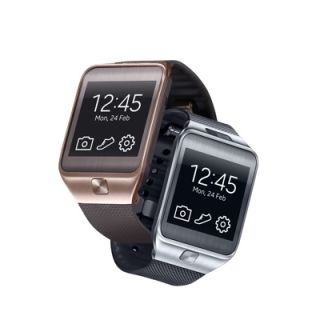 Just five months after launching its first smartwatch, the Galaxy Gear, Samsung has unveiled its two newest wearables, the Gear 2 and Gear 2 Neo. smartwatches offer significant improvements over their predecessor including an all-new Tizen-based interface, a more powerful processor and a heart rate sensor. Both watches will ship in April and, though Samsung is keeping mum on pricing, we suspect that they may be less expensive than the original, $299 Galaxy Gear.

Like the Gear, the Gear 2 features a 2-megapixel shooter. Though, unlike the Gear, which has a camera mounted to its wrist strap, the Gear 2 puts its lens in the frame just above its display. The Gear 2’s camera can capture images and video at up to 1920 x 1080 where the Gear can only capture photos at a maximum resolution of 1392 x 1392 and video at 1280 x 720.

In terms of performance, the Tizen-powered Gear 2 and Gear 2 Neo feature 1.0-GHz dual-core processors, 512GB of RAM and 4GB of onboard storage. That’s better than the 800-MHz single-core chip found in the original Gear. Beyond their specs, the Gear 2 and Gear 2 Neo get a built-in IrLED sensor, which, when used with Samsung’s WatchOn app, lets users control their TVs and set top boxes.

The Gear 2 and Gear 2 Neo also include the ability to listen to music without needing to have your smartphone with you. Fitness fans will be excited to hear that the new smartwatches include heart rate sensors and pedometers, which can be used to create personal fitness routines. The watches are also now IP67 certified as dust and water resistant, meaning that you don’t have to worry about on sweating on them.

The biggest downside to the Gear 2 and Gear 2 Neo is the fact that they, like their predecessor, are only compatible with Samsung Galaxy devices, meaning you can’t use them with other Android smartphones. Sony’s SmartWatch 2 can be used with any Android device, while the Pebble Steel is compatible with both Android and iOS.

Will the Gear 2 and Gear 2 Neo be Samsung’s first must-have smartwatches? We’ll find out when they hit the streets in April.