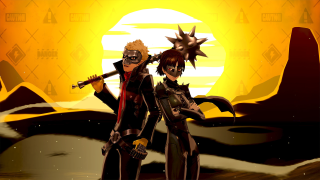 Japanese RPG Persona 5 stole our hearts, so we at Tom's Guide (much like you at home) are very interested in the forthcoming Persona 5 The Royal (also known as Persona 5R). And while publisher & developer Atlus have been giving us just enough to be intrigued been keeping things mum, giving us just enough information to get excited, and even have us excited to pre-order (if only we could).

A lot of the hype around Persona 5 R is tied to the game Persona 4 Golden (a PS Vita re-release of Persona 4) which was heralded as the best version of that game. So what are we getting with Persona 5 R?

What is Persona 5 The Royal?

Trailers for Persona 5 The Royal (also styled as Persona 5R) revealed that the title will follow the "all that and then some," of P4G, by expanding the game with new characters, worlds, and gameplay.

The second trailer for Persona 5 R (published on March 23, 2019) revealed the full title and introduced an unnamed female student at the Shujin Academy, who we've later learned is Kasumi Yoshizawa, who will attend Shujin academy.

The biggest news about P5R is that the title will expand the school year at Shujin by a whole new semester. This game from Gematsu, which published notes from a Weekly Famitsu interview with the game's director Daiki Itoh and producer Kazuhisa Wada that revealed a lot about the new game. For starters, this new semester is going to be, in terms of sheer volume, beyond the expectations for those who played Persona 4 Golden. Also, the "Royal" name of the game is meant to convey the team's intent to make "a gorgeous title."

When is Persona 5 The Royal coming out?

Uh... we found this card waiting for us this morning. Anybody know what it means? pic.twitter.com/oMOJ6g17xkDecember 3, 2019

According to Sony, there will be multiple editions. The $90 Phantom Thieves Edition is bundled with an Official Joker Mask (comes with a stand), collector's box, limited edition Steelbook case, art book, soundtrack, and dynamic PS4 Theme code.

A trailer published on April 24 at the Persona Super Live 2019 concert revealed that Kasumi Yoshizawa will be joining forces with the Phantom Thieves after transferring to the school. Kasumi will be a confident you can level up, and P5 gamers won't be surprised to hear that we'll see a new side of her as the game progresses.

P5 The Royal will also add more city exploration options and provide new confidant social links. In one screenshot posted to the game's website, we see Kasumi dining out with Goro Akeshi and Joker.

On the game's site p5r.jp, we've been introduced to a new confidant coming in P5R: Takuto Maruki, a school counselor at Shujin Academy, who has been shown to interact with Joker.  Some are claiming the site also shows a character named Ikeman, which Gamer Professionals is claiming translates to "good-looking man" — who is a possible human form of Morgana, the party member from Persona 5 who is a cat.

Reports say we should expect more new confidants, other than Kasumi and Maruiki.

Yes, P5 The Royal might finally show is Morgana's true form, as this character spent much of Persona 5 struggling with their potential past. Ikeman is seen lusting after party member Ann Takamaki, another sign he may be Morgana.

The trailer shows the logo of that game's protagonists, the Phantom Thieves of Hearts (a group of teens who invaded the minds of terrible adults, to make them confess to terrible crimes they have hidden from society).

Further, the trailer shows moments from Japan's Shibuya ward, a popular district filled with giant screens and very busy people, which was a key location in that game. P5R is expected to continue the true-to-life depictions of Tokyo that impressed many when it came to Persona 5 with the addition of Kichijoji, a neighborhood that Twinfinite says is "popular neighborhood known for its young atmosphere, its rich traditional shopping streets, and plenty of attractions both during the day and the evening, whether you’re on your own, with friends, or with your significant other."

The above clip, created by YouTuber ZestraX, takes published video footage of Kichikoji and translates it to English.

What consoles will Persona 5 The Royal come out on?

P5R is likely a PlayStation 4 exclusive. While many (myself included) have hoped Atlus will release a Persona game on the Nintendo Switch, we've got little reason to expect P5R will be on Nintendo's portable console, as both of Persona 5 R's trailers began with the short "PS" video clip that often precedes PlayStation exclusives.

The GearNuke report supports the expectation that this title is a PS4 exclusive.

While rumors leaked details of an upcoming Persona 5 S game on the Nintendo Switch, that game has turned out to be Persona 5 Scramble: The Phantom Strikers, which isn't a port of the PS4 game. A trailer posted on April 25 revealed that this game is a horde-fighting action RPG (commonly known as musou), made by Dynasty Warriors developer Omega Force.

It's coming to the Nintendo Switch and PS4, at a to-be-announced future date.

On April 2, prolific gaming tweeter @Wario64 posted what appeared to be evidence that Persona 5 coming to the Switch, confirming what we'd heard in late February. His post quote-tweets a photo showing "Persona 5 - Nintendo Switch" for $59.99 in a Best Buy terminal, and the well-regarded tweeter notes "I can confirm it is in Best Buy's system."

The first website to tease this game, https://p5s.jp/, hyped the April 25 announcement. Using the inspect element code trick in a web browser, you can find a 6-line message, an early Easter Egg if you will.

That's it for now, keep this page bookmarked to get updates from those events. We're as curious and eager to learn more as you are.