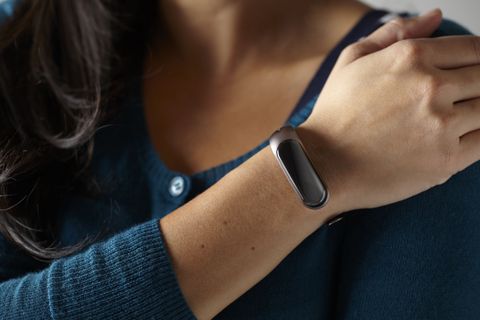 A stylish design and engaging app make the Mira fitness tracker worth the premium.

Fitness trackers have many features and sensors nowadays, but few of them actually look good on your wrist. That's where Mira ($169) comes in: It's an activity tracker designed like jewelry, proving that tech and high style can coexist. Fashionistas of the world can now track steps, calories, distance and elevation using Mira, without worrying about anyone gawking at "that thing" on their wrists. But the Mira is more than just a pretty face.

Mira is clearly a fitness tracker targeted to women. It's made of a single piece of surgical-grade stainless steel that hooks around your wrist, similar to a cuff-style bangle you'd find hanging nonchalantly off a wall spoke at Urban Outfitters or Anthropologie. It doesn't just look like an expensive piece of jewelry; it feels like one, too. It's a weighty 1.2 ounces, making it feel like a substantial heirloom trinket. Since I'm a lover of all things gold, I preferred the Mira in a brushed-bronze finish, but it's also available in silver.

The oval-shaped tracking module sits at the top of your wrist and has a display that only wakes when you lightly squeeze its two sides. When awakened, it shows you how much of your preferred metric you've completed for the day (distance, calories, steps or elevation), and then the current time. It's not the stylish analog watch face of the $149 Withings Activite Pop, but it's more attractive than the face on the $149 Fitbit Charge HR.

That sensor can pop out of the bracelet, allowing you to clip it to your shirt or bra strap. I did this once — the module was difficult to remove, but I preferred it in the bracelet because I actually liked the way it looked on my wrist.

The band is nonadjustable (just slightly bendable), so Mira comes in three sizes. I wore the medium-size band because I like my wrist-worn jewelry to be loose and sit higher on my arm, but there are two smaller sizes to choose from (petite and small). All of the Mira models are splash-proof, but don't go diving into the pool with this bracelet on.

Mira tracked my steps accurately, measuring 100 steps around my office as 110 steps. I never had an issue waking the display; it was very responsive, lighting up at the softest touch of my thumb and index finger. When I opened the app to sync it with the device, the Mira tracker never took more than 15 seconds to fully transfer multiple days of data.

One drawback of Mira is that it does not track sleep like the Fitbit Charge HR and the Withings Activite Pop do. However, because it's just as much a bracelet as a fitness tracker, I didn't miss this feature; after all, I wouldn't normally wear a bracelet to bed.

Also, Mira can't currently connect to third-party apps, whereas Fitbit and Withings can. So, for example, if you use MyFitnessPal to track your food intake, you'll have to keep doing that separately, at least for now. However, Mira hopes to have this feature available in the near future.

Mira's mobile app is clean and minimalist, and it breaks down your activity info in a way that's clear but also fresh in its approach. The My Mira app is currently available for iOS, and will be available for Android devices beginning this fall.

In the middle of the home screen are circles that show you your activity throughout the day. The innermost circle is purple and grows hills depending on how active you were each hour — the higher the hill, the more active you were. The hills grow into the outer, gray circles, which act as a timeline with the labels "6 a.m.," "12 p.m." and "6 p.m.," giving you a visual indication of how active you were during certain times of the day. It's a welcome change from the typical bar graphs you see in most other fitness apps.

Swiping to the right brings up the same view, but for the previous day. You can keep swiping to see your past days' activities, or you can change the view using the bar at the top of the screen to see an hourly view or a weekly summary of your fitness so far.

Also on the top bar are the menu icon and a plus sign, which lets you add a specific activity or a journal entry. Mira doesn't currently support diet tracking, but the journal entries let you record the foods you ate each day. However, you don't get a food library or calorie counts yet.

At first, the Mira app felt sparse to me, but that's because I spend a lot of time tapping through pages in mobile apps that show heart-rate zones, activity line graphs and calorie diaries. The app isn't as comprehensive (or colorful) as those for the Fitbit Charge HR or the Withings Activite Pop, but that's because it doesn't track as many things as those devices do. Nevertheless, it's pleasant to use, and provides just enough information to catch you up on your daily activity and provide you with motivation for tomorrow.

At the bottom of the home page, the app asks if you "need inspiration," and this is where Boosts come in. Boosts are little tidbits of health and fitness knowledge that Mira gives you to keep you motivated and push yourself more each day.

These factoids are phrased in such a way that they make it seem like your friend, rather than your phone, is giving you advice. For example, "Run for 12 minutes, and you'll burn 125 calories. That's only about 4 songs on your playlist — it'll be over before you know it!" was my favorite, as it would take minimal effort for me to actually complete that challenge. That's what I appreciated most about Boosts: They're actionable, and it doesn't take much effort to integrate them into your daily routine.

MORE: How to Choose the Right Fitness Tracker for Your Needs

Mira lets you save your favorite Boosts by tapping the star icon on the cards, and you can access them at any time in the My Boosts page of the menu. I would often tap through a few new Boosts at the end of each day, saving a few with the intention of completing them over the next couple of days.

The Mira tracker lasted six days before running out of power. That's better than the four days of battery life on the Fitbit Charge HR, but not as good as the eight-month life of the Withings Activite Pop. When Mira began to die on the sixth day, the screen flashed with an empty battery icon. Ideally, I would have liked more warning before the device stopped working.

You recharge the tracker by attaching it to the small included stand. The back of the sensor snaps onto the stand magnetically, and you plug the stand into any USB port via its attached cable.

Mira is not a do-everything fitness tracker, but it does what it sets out to do. It's a lovely piece of jewelry that monitors steps, distance, calories and elevation. Its motivational Boosts, while sometimes corny, propose simple things you can do to move more each day.

Moms will love Mira, but so will younger women who want a fashionable device that can give them a snapshot of their daily activity. For those who want a device that's more fitness- and workout-oriented, the $149 Fitbit Charge HR — which benefits from an integrated heart-rate monitor — is the best choice. However, Mira's main goal is not to turn you into a marathon runner, but rather to help you be a little more active than you were the day before — and it succeeds in that mission.