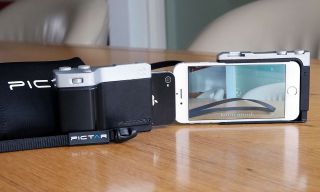 When it comes to iPhone photography, there’s a number of systems that offer the ability to switch out lenses like you do on a real DSLR, but almost none of them offer the kind of ergonomics and convenient controls you get from a full-sized shooter. That’s where the Pictar from Miggo comes in, because when you pair this camera grip and its free app with your iPhone, you get a fast and full-featured system that won’t make you feel bad about leaving your big camera at home.

Update: After hitting it's target and reaching a stretch goal of $150,000 in less than three days, Miggo announced that it will be working on a version of the Pictar specifically for iPhone 6 and 6s Plus models called the Pictar Plus. Backers on Kickstarter will have the option of choosing the regular model or the Plus sometime before Miggo ships out its orders later this year.

The Pictar is launching on Kickstarter today, April 20, for a promotional price of $90 and has a scheduled shipping date for December 2016. It works with everything from the iPhone 4 to the iPhone 6s.

The best thing about the Pictar are its controls: Not only do you get a true two-step shutter button that allows lets you pre-focus by pressing it down halfway, it has dials on front and back for controlling shutter speed and exposure, and a rocker for zooming in and out.

You can even change what the dials do by using the Pictar’s free iOS app. Becausse the grip communicates with your phone using ultra high-frequency sound and not Bluetooth, it only uses power when you actually press a button. Miggo says the Pictar can get multiple weeks worth of battery life on a single charge.

In the run up to its launch on Kickstarter, I got a chance to check out a pre-production of the Pictar and I came away pretty impressed. I love the two dials, which gives you more control than most compact cameras, and puts the most important adjustments right at your fingertips. Even in an unfinished state, the dual aluminum and plastic construction felt quite sturdy. On the inside, there are foam pads that kept the phone securely in place, and setting up the whole system was as simple as separating its two halves and slipping in your device.

I did notice that the travel distance on the two-step shutter felt a bit shallow, but that’s something that Miggo is already working to fix on the final retail version. The company also said its planning to move the zoom rocker closer to the middle so it's even easier to reach.

Aside from the Pictar’s retro-chic good looks, I like that its design doesn’t cover up the iPhone’s camera lens. That means you can add on a separate lens system, such as the Moment or Olloclip, and get a pseudo DSLR on-the-go.