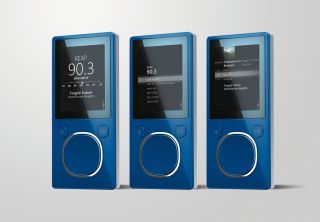 A new feature called “Buy from FM” will enable Zune users listening to the Zune’s built-in FM radio to tag, purchase, and download any song they’re listening to while they’re connected to a wireless network. If the Zune isn’t in range of a Wi-Fi hot spot, the device will queue the tracks and download them when the player is able to connect to a network. Microsoft tells us the “Buy from FM” feature uses Radio Data System and RT+ data feeds within the FM broadcast frequencies to identify song and artist data.

Microsoft’s Zune Marketplace gives customers the choice of purchasing and downloading albums or single tracks, or paying a monthly subscription fee of $15 for a Zune Pass that allows them to “rent” as much as they can fit on the player. Any downloads that haven’t been purchased become inaccessible once the customer cancels their Zune Pass subscription. The Zune can’t play music purchased from other online music sources, including iTunes and Rhapsody.

Zune Marketplace subscribers can share music via the Zune Card, a real-time playlist consisting of each customer’s favorite and most recently played songs that’s accessible from the Zune software or from a network-connected player.

Several other new Zune features are more similar to what other service providers already offer. The new Personal Picks algorithm embedded in the Zune software, for instance, is very much like the Pandora and Last.FM music-recommendation services. Personal Picks analyzes the music you listen to and recommend new artists, albums, and tracks that share similar attributes. Microsoft is also introducing a series of channels programmed by experts from magazines such as Billboard and The Fader, as well as deejays from KEXP public radio. This feature reminds us of similar offerings from Slacker and RealNetworks’ Rhapsody services.

The new features will be available to existing Zune owners via software and firmware upgrades on September 16. Microsoft also announced new models (including a 16GB flash player that will sell for $200 and a 120GB hard-drive model that will go for $250). Prices for the existing 4- and 8GB flash models will drop to $130 and $150, respectively.

A word of caution to consumers thinking of buying music from Microsoft: When online music services who have relied on Microsoft’s PlaysForSure DRM scheme have exited the market (including Yahoo Music), they’ve left their customers in the lurch. People who thought they owned the tracks they purchased can no longer play those tracks because their licenses can’t be renewed. Microsoft’s Zune Marketplace uses an entirely different DRM scheme, but if Microsoft ever decides to leave this market, the consequences for its customers will likely be the same. Fortunately, Microsoft also sells tracks in MP3 format without DRM.