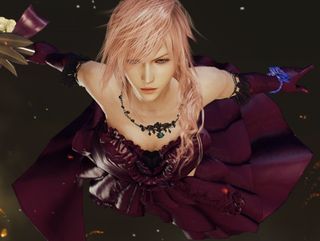 NEW YORK — Despite fans' lukewarm reception to the "Final Fantasy XIII" franchise, developer Square Enix is determined to add more games to the series. "Lightning Returns" marks the third entry in the series, and although it does a lot of new and exciting things, advancing the story is still a bit of a chore.

Tom's Guide recently had a chance to go hands-on with "Lightning Returns" (which will debut on February 11, 2014 at $59.99 for the Xbox 360 and PlayStation 3) at a Square Enix event. Square Enix has redesigned the gameplay from the bottom up, but anyone turned off by wordy cutscenes and aimless narratives might want to think carefully before diving in.

Our demo began in a wide-open field, where Lightning, the pink-haired swordswoman who starred in the original "Final Fantasy XIII," had to search for Dr. Gyshal. This man was an expert on chocobos, the large, mountable yellow birds that have been a mainstay of the "Final Fantasy" series since its early days.

In an extremely long, awkward conversation that took entirely too much time to convey some very simple information, Dr. Gyshal outlined Lightning's quest. He tasked her with finding the Angel of Valhalla, an elusive white chocobo that could help her fight against a mysterious, villainous force known as Chaos.

Although the graphics and voice acting were top-notch, the sheer length and monotony of every conversation prompted us to just skip past most of the dialogue.

The game improved considerably once Lightning set out into the vast, explorable world. Unlike "Final Fantasy XIII," which relied on very linear-level design, and "Final Fantasy XIII-2," which offered multiple paths that could get confusing, "Lightning Returns" features open areas where Lightning can roam freely, encountering enemies, friendly characters and treasure as she goes.

The Angel of Valhalla was marked on Lightning's map. As she made her way toward it, she stopped every now and then to trounce enemies in her path. Although both "Final Fantasy XIII" and "XIII-2" had good battle systems, they were very similar. "Lightning Returns" opts for something entirely different.

Instead of having two other party members at her back, Lightning fights alone. This does not limit her options, however, thanks to the Schema system. In between battles, Lightning can obtain various weapons, armor and abilities, creating new Schemata templates. In the demo, Lightning utilized the Savior (quick elemental attacks), Dragoon (slow, powerful attacks) and L'Ange Noir (defense and healing) Schemata.

As an added bonus, each Schema gives Lightning a very different costume. Most are unnecessarily revealing, but anyone who wants fine control over how the game's protagonist looks should get a kick out of fine-tuning her appearance and abilities.

In battle, each Schema has access to four different abilities, which might include physical attacks, magical attacks and guard techniques, depending on your build. Each move depletes a certain amount of Lightning's stamina, but each Schema possesses an independent stamina bar. This means that once you exhaust your Savior Schema, for example, you can switch to Dragoon and let Savior recharge.

Battles are fast, furious and strategic. You'll need to figure out the right combination of physical and magical attacks to stagger your enemies — which lets you dish out massive damage. You'll also need to learn enemy attack patterns and guard or heal accordingly. Because Lightning has no party members to heal her, she needs to keep an eye on her own health.

After a long journey through verdant grasslands and crumbling ruins, Lightning found the Angel of Valhalla, but it was not alone: A fierce Chocobo Eater guarded it, leading to a boss fight with the huge creature. The Chocobo Eater was a much more difficult opponent to defeat than the wolves and slime creatures that Lightning had encountered up until this point, but the strategy was the same: attack and guard as needed, and then switch Schema to recharge.