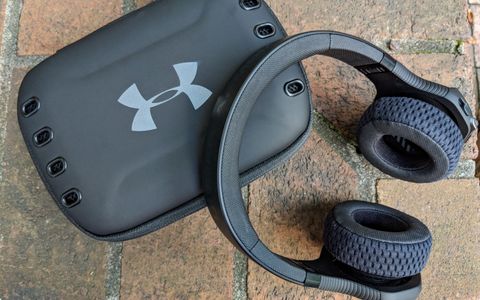 In a consumer market that heavily favors sports earbuds, on-ear fitness headphones aren't exactly popular. But whereas others have taken gambles, JBL has its sights on taking the house.

Building on its collaborative efforts with Under Armour, the audio company has just launched its most ambitious headphones yet, the Under Armour Sport Wireless Train. These on-ear headphones are built with durability and fitness in mind. Plus, these headphones are equipped with premium design features and proprietary technologies from both companies to optimize your workouts. However, they do suffer from some small performance setbacks.

If the Sport Wireless Train headphones look similar to the Project Rock Edition headphones, that's because they're exactly the same, minus the Dwayne "The Rock" Johnson mantra above the headband, brahma bull insignias and higher price. Design-wise, the headphones are adaptive and strong enough to survive rough play. The perforated ear cushions are furnished with UA's SuperVent fabric, which is engineered to soak up sweat and keep ears cool. The outside of the ear cups is covered with an IPX4-rated rubberized chassis for dust and water resistance. This is enough to handle some splash, but not submersion in water. On top is a flexible headband with breathable, grip-tight padding that keeps the headphones in place.

Detailing is another area that factors into the charm of these headphones. One can't help but admire the Sport Wireless Train's industrialized silhouette, which clearly stands out from JBL's other streamlined on-ear designs. The octagonal ear cups give them a badass, contemporary look any muscle-bound bro would appreciate. The JBL and UA logos with dark slate finishes on each side, along with the sturdy metal hinges, lend them a sleek presence.

Bundled with the headphones is a stylish, hard-shell case that's ventilated to speed up the drying process after workouts. It's solidly built to ensure full protection whether you're tossing them in a gym bag or hanging them from a backpack via a carabiner. The case stores other included accessories, such as the 3.5-millimeter headphone cable with an in-line remote and mic, and a micro-USB charging cable.

Currently, the cans are are available in two color schemes: all black, and black and red.

At less than a pound, the Sport Wireless Train is surprisingly light. It's not as slender as the Plantronics BackBeat Fit 500, but it's still portable enough to carry or wear around the neck.

Stability is everything with these headphones, as best demonstrated by the ventilated ear cushions. Leather cups are notorious for slippage and leave ears feeling gross after workouts. JBL's fabric cushions offered quality grip and sweat absorption when I ran 5Ks outside in scorching conditions. I was impressed by how well they kept perspiration from trickling down the sides of my neck. The breathable headband is another striking component that molded perfectly on my head for a quality fit.

However, I must say, these aren't the coziest headphones I've tested. My ears felt fatigued within 30 minutes due to ear cups' tight compression. Running with them wasn't so bad, but the discomfort became obvious and unpleasant during rest periods.

JBL keeps its control scheme simple by designating all commands to the right ear cup. It takes some getting used to, since most of the buttons are located in the rear. But because they stick out, they're easier to find. Plus, they provide great tactility.

The raised UA button that enables the TalkThru function (more on that later) is the most distinguishable nodule. Right around the corner is a unibody module that houses two volume buttons that also let you skip or play a previous track when they're held down for a few seconds, and a central multifunctional button for playback, call management and voice assistant. The button on the auxiliary cable performs these same actions. Above the module, you'll find a button to power and pair the headphones.

One complaint I must mention with the control scheme is port accessibility. The audio jack is on the bottom right, and the charging port is on the left. The protective flaps for each are placed so deeply into the outputs that it requires prying them open with some sort of thin, sharp object. Pick your tool wisely (e.g. pen cap), or risk damaging the flaps.

You pair the Sport Wireless Train the same way you would any other wireless headset. Hold the toggle switch until you see the white LED turn on. Keep doing so until the light turns blue and blinks to signal pairing mode. Enter your laptop or smartphone's Bluetooth settings, find the Pair New Device option, and select UA|JBL Train.

If there were ever a standout set of headphones in the JBL catalog to boast the company's bass-heavy sound profile, this is clearly the winner. I listened to numerous tracks across different music genres, with and without the audio cable. While there were noticeable differences between the two listening options, the Sport Wireless Train flexed enough sonic muscle to fuel my workouts.

When I cued up Busta Rhymes' "Put Your Hands Where My Eyes Can See," the headphones did a stellar job of projecting the record's impactful lows and staggering percussion. I feared listening at max volume would create distortion, but the sound profile is balanced enough that the lows never outweighed the mids or highs. Busta's vocal clarity was so clear, I could make out his ad-libs and enjoy the conga-drum pattern. The underemphasized mids and lackluster lows of the BackBeat 500 can't handle such soul-rattling production.

I listened to Daft Punk's "Around the World"  next. The buildup at the start — with the muddled lows transitioning into the crisp-sounding, hypnotic bass line — is golden. The Sport Wireless Train enriches that opening segment by giving the synth bass extra oomph that dominates once the robotic vocals come into play.

Out of curiosity, I listened to more melodic tunes, such as Bill Withers' "Ain't No Sunshine," to get a better feel for the headphones' mids and lows. I'm still shocked by how clean the strings sounded throughout the song, especially when Withers hit higher pitches. The BackBeat Fit 500 and the Soul Electronics X-Tra Bluetooth Over-Ear Sports Headphones, on the other hand, struggle to harmonize multiple instruments and vocals at the same time.

I did experience a fuller sound stage when listening to these records using the audio cable. Vocals were more compelling, and the bass had added depth. There was also a bump in volume that paved the way for a punchier and louder delivery. The sound pressure wasn't as overwhelming on my ears as the Beats Studio3, which oddly remains a regular at most gyms despite lacking any gym-friendly durability.

The TalkThru feature is great for working out with friends or serving as a personal trainer. Pressing the UA button on the right side enables the feature and fades the music into the background at about 10 percent volume. From there, the three speech-optimized, noise-canceling mics turn on to amplify your atmosphere, so you can hear everything more clearly.

I know what you're thinking: How is this any more practical than pressing pause? If you're someone who easily gets thrown off by distractions, TalkThru does help to keep up your momentum by not completely muting playback.

The technology is dynamic and allowed me to not only converse with people without taking the headphones off but also help me hear distant sounds that normally go undetected. Switching it on made it easier to identify the gym's playlist, though I could only handle so much of Taylor Swift's saccharine vocals before jumping into something more energetic, but that’s no fault of the Sport Wireless Train.

With the purchase of these headphones comes a 12-month premium membership to UA's MapMyFitness app. Does it support any embedded features on the Sport Wireless Train? No. What it does is connect with multiple apps and wearables to create a one-stop platform for managing all your physical activity. There are a plethora of tracking features and training plans, plus different running routes based on your GPS to encourage local runs.

I'm always skeptical of on-ear headphones' ability to double as calling headsets. But the Sport Wireless Train made me a believer — at least on the wireless end. Taking calls was a satisfying experience. My girlfriend sounded clear in both loud and quiet environments. Rarely did she have to raise her iPhone at max volume to hear me better.

Using the cans wirelessly to make calls was a joy, but talking to people through the audio cable was disastrous. My girlfriend complained about hearing her own echoes during conversations. On my end, the in-line mic was so sensitive to noise that any little thing produced clatter. I'm still taken aback by how gently caressing the cable's plastic control module created a louder sound than a fire alarm in my hallway.

JBL estimates the Sport Wireless Train's battery life at 16 hours, with results varying based on your volume preference. This is the same as the runtime for the BackBeat Fit 500, and 8 hours less than the X-Tra headphones' estimated 24 hours of battery life.

I got 6 to 8 hours right out of the box, so that was already a good sign. After two days of moderate listening, they had retained their charge. Five days in, and I was finally due for some juice. Luckily, I discovered that the headphones support a "speed charge" feature, which blessed me with 1 hour of playback after only 5 minutes of charging. This got me up and wirelessly running out the door. My low-battery anxiety was also tamed by knowing I could use the auxiliary cable for wired use when the battery died, which is always clutch.

Connectivity was a 50-50 affair. Bluetooth range was the typical 33 feet and was solid enough to let me walk around the apartment and go down one flight without any dropout. The headphones were also responsive in pair mode and instantly connected to my Google Pixel 2 XL.

MORE: How to Pair Bluetooth Headphones with the Fire TV Cube

Unfortunately, the Sport Wireless Train had commitment issues with my MacBook Pro, automatically removing itself from my available Bluetooth devices list on multiple occasions. It was irritating to revisit the setup process every time this happened. The headphones also had the tendency to unpair when they were inactive for 10 minutes or more, or when the battery died.

The JBL Under Armour Sport Wireless Train headphones are light, loud and sporty enough to accommodate every workout you put them through. Many people will find the design elements, from the sweat-resistant ear cushions to the grip-material headband liner, to be highly serviceable, alongside the phenomenal soundstage. Extras such as the auxiliary cable and 12-month subscription to UA's MapMyFitness app are also greatly appreciated.

The inclusion of active noise cancellation would have placed these headphones in Editors' Choice territory, but its absence does little to diminish their sound quality. What might be a bigger concern for some is overall comfort. Depending on your ear shape and pain threshold, the ear-cushion can be uncomfortable over time . Besides that, the Sport Wireless Train is perfectly priced and provides more bang for your buck than its competitors, which we can count on one hand.