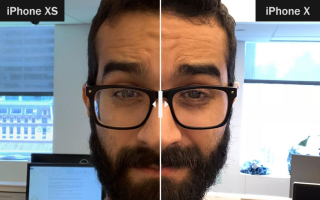 The iPhone XS' dual 12-megapixel rear cameras take the best photos we've ever seen from one of Apple's handsets. But the front facing camera is leaving some users scratching their heads.

Some are complaining that the iPhone XS and XS Max appear to employ aggressive smoothing in self portraits. Many phones add this effect as a method of beautifying skin tone, but most of the time it's left as an option to the user. The new iPhones offer no such option, but some believe Apple is offering a beauty mode of sorts by default.

Commenters on the iPhone subreddit have been offering their own examples of the effect playing out on both models of Apple's $1,000-plus flagships. Unbox Therapy on YouTube has also shed light on this issue with a video that has racked up nearly 3 million views.

To get a better sense of how the iPhone XS and XS Max deals with selfies in comparison to the iPhone X, we enlisted the help of a couple of volunteers. First, we asked our colleague Jorge to capture selfies on both phones. The results were similar to what some users have already reported: Jorge's skin looks smoother through the lens of the newer model, but this came at the expense of detail and duller highlights. The lack of sharpness was also evident in the texture of his shirt's fabric and his beard.

On the plus side, the iPhone XS didn't blow out other parts of the image as the iPhone X did.

In another series of selfies courtesy of Tom's Guide's Sherri L. Smith, we see that the iPhone XS again dulled the brighter spots — not just along Sherri's face, but with regard to her shirt as well. The improved dynamic range of the XS' Smart HDR feature seemed to limit the contrast and return more detail to the highs and lows. There's a slight haze to the image, though it's arguably not as pronounced as in the first test.

The final test demonstrates how the XS' front facing cameras deal with intense light cast on the subject. On Kiki here, it's clear that the newer phone diffuses the fluorescent lighting inside our office, leading to a skin tone that's more even, but perhaps less realistic. For what it's worth, Kiki much preferred the more balanced XS rendition — a reminder that when it comes to selfies, realism isn't the only thing that matters.

To be clear, the front camera on the iPhone XS and XS Max has been improved to reduce noise and improve overall image quality, but Apple has not said it is not applying any sort of face smoothing or filters on its selfies for the new phones.

Abdul Dremali, one such user who initially called attention to this selfie controversy, informed 9to5Mac that Apple reached out to him and is "working on this issue actively." But we have not confirmed that at the time of writing. We'll update this story with any developments.