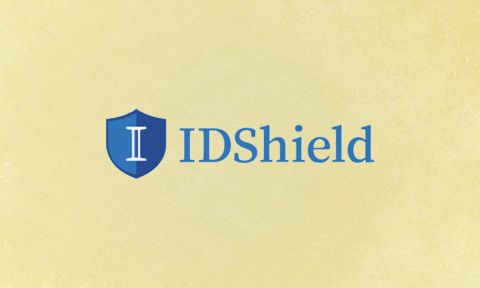 A good value. Get IDShield if you're primarily interested in keeping an eye on your credit reports and scores without spending a lot. But if you want comprehensive identity protection as well, consider IdentityForce UltraSecure + Credit.

An inexpensive way to protect your online identity, IDShield gives you the choice of using information from one or all three major credit-reporting agencies, including quarterly credit reports and monthly credit scores. You also get a helpful password manager.

But the service lacks two-factor authentication, a credit-improvement simulator or 24/7 tech support, and its sign-up procedure was frustratingly long and awkward. Still, it's a great bargain if you're primarily interested in monitoring your credit files. IdentityForce UItraSelect + Credit costs more but has more comprehensive personal-information monitoring; still, IDShield Identity Protection is one of the best identity-protection services.

I signed up and paid for IDShield's Individual monthly service in early 2019, along with four competing services, when IDShield still offered only information from the TransUnion credit bureau. I used IDShield for nearly three months, with the service keeping an eye on my accounts and credit.

IDShield doesn't offer a free trial, but it is among the least expensive identity-protection services, even though it has raised its prices from the last time we reviewed it.

Its awkwardly worded Individual 1 Credit Bureau Monitoring plan costs $12.95 a month. On the downside, you get what you pay for, as this plan draws credit data only from TransUnion.

In spring 2019, IDShield added an Individual 3 Credit Bureau Monitoring plan that uses data from Equifax and Experian as well. At $17.95 per month, this is half LifeLock Ultimate Plus' monthly price and provides more credit-file information.

At $25.95 per month, IDShield's Family 1 Credit Bureau Monitoring service is an inexpensive way to protect your identity as well as those of your spouse and up to 10 children. It includes monitoring of your TransUnion credit file.

The $32.95-per-month Family 3 Credit Bureau Monitoring plan, also introduced in spring 2019, uses credit data from Equifax, Experian and TransUnion and is still cheaper than LifeLock's top individual plan. Unfortunately, there's no discount for any IDShield plan if you pay for a year up front.

Other than the numbers of credit bureaus monitored. IDShield's one-bureau and three-bureau plans are exactly the same, a rarity in an industry where the best perks are normally saved for the priciest plans.

Both IDShield plans do the same monitoring for a variety of ID-theft methods and offer the same benefits, including quarterly credit reports, monthly VantageScore credit scores and up to $1 million for identity restoration and lost funds.

The parent company, LegalShield, also offers a variety of other services, from legal help to insurance for truck drivers. You'll also get signed up for an affinity program that offers discounts at Kohl's, Target, Verizon, Ticketmaster and a variety of other retailers and service providers.

LegalShield rates a A+ with the Better Business Bureau, with no open complaints listed.

IDShield's three-bureau plans keep an eye on your complete credit history while watching for abuse and include quarterly full credit reports from each agency.

A couple of other identity-protection services we've reviewed offer only annual credit reports, which you can also get for free through annualcreditreport.com. Only PrivacyGuard offers a monthly credit report, but it's a "merged" one with data from all three bureaus.

Depending on your plan, IDShield provides one or three monthly VantageScore 3.0 credit scores for assessing your creditworthiness before you try to get a car loan or a mortgage. If you have an identity-takeover crisis, IDShield can work with all three credit bureaus to restore your credit.

The service scans both the open and dark web for instances of your personal information popping up where it shouldn't be. In addition to court records, payday loan companies and social media accounts, it monitors your bank and credit-card accounts as well as investments.

IDShield used to have $5 million available per subscriber for identity-theft investigation and credit recovery, but that didn't include repayment for money that was stolen.

The insurance service now is in line with those of other identity-protection services and provides up to $1 million for a subscriber's credit restoration and fund reimbursement. It adds what it calls an unlimited service guarantee that promises to do whatever it takes to restore your identity and good credit.

IDShield will even notify creditors, financial service providers, law enforcement and collection agencies of the status of your investigation. If the investigation hits a dead-end, the investigators promise to bring in heavy hitters such as the Federal Trade Commission, state attorneys general and others.

IDShield covers everything from the cost of new documents (such as a driver's license or passport) to fees for notaries and accountants. If you need it, they will reimburse you for child or elder care costs (up to $2,000) directly associated with the identity investigation and recovery as well as a maximum of $1,500 a week (for five weeks) for lost wages and $2,000 for travel expenses.

The plan also has lost or stolen wallet protection that can help you cancel old credit cards and get new ones, as well as tell you how to get a new driver's license and other documents.

IDShield doesn't put alerts and notifications up front on your online account's Overview web page, nor is there a category to quickly get to them. It took a little while to get used to the web interface's design, but I figured out that diving into the Credit or Identity Monitoring sections on the left side put the notifications in your face.

Alerts range from credit and debit card activity to bank account warnings, and can cover up to 10 investment accounts.

Alerts can be emailed to you or texted to your phone, but they will also show up in the Android and iOS IDShield apps. If a registered sex offender moves in within a specified distance of your home, you'll get a map specifying his or her residence. However, IDShield missed a sex offender that PrivacyGuard noticed. During my three-month test period, IDShield sent me two other, minor alerts.

IDShield was easily the longest and most frustrating of the five identity-protection services for me to set up. The entire process took a week. I suspect mine may be a special case, but it still doesn't inspire confidence in IDShield's tech-support infrastructure.

The process started with me picking the IDShield Individual one-bureau plan (the three-bureau plan was not yet available) and selecting my state of residence. At this point, the company tried to upsell me on LegalShield's legal, small-business and commercial-driver services; I declined them all.

In the next form, I typed in my name, date of birth, address, email, home phone and the last four digits of my Social Security number, followed by a username and password and a credit-card number to pay for the service.

So far, so good. But the activation email I received 3 hours later was for LegalShield, not IDShield. It didn't contain the membership number I needed to activate my IDShield account.

MORE: What to Do If Your Social Security Number Is Stolen

IDShield's telephone tech-support people were just as confused as I was. They found I had two different membership numbers. One might have been a leftover from the subscription I had to try out IDShield for a previous review, but I had no problems with Identity Force, Identity Guard or LifeLock, which I had also used before. It may be that IDShield doesn't totally wipe personal data after users have ended subscriptions.

IDShield's tech-support staffers told me to sit tight and promised to call me back. The next morning, I got an email message, not a phone call, with a new membership number. But the IDShield website said it couldn't find an account with that number.

I replied to the email asking for help, got no response after waiting for 2 hours and finally just called the company again. After listening to the same music while on hold, I was told by tech support staff that there was a problem on their servers.

To make a long story short, it took a week and four tech-support calls to get my IDShield account set up. During this period, several emails I sent to the company got only automated replies.

One of the reasons for this mess may be that IDShield does not have tech-support staff on duty 24/7. Its crew is there from 7 a.m. to 7 p.m. Central time, Monday to Friday. Many other identity-protection services offer 24/7 tech support. But in an identity emergency, IDShield has people available to help night or day.

Like other identity-protection services, IDShield has a web interface and mobile apps for iOS and Android. The website uses a secure HTTPS connection, but its interface is crowded. Regardless of which plan you subscribe to, the company labels its web interface as "IDShield Plus."

The Overview page displays 15 rectangles, each with a different function, which can be a tad confusing until you have a visual memory of their placement. They range from Credit Score and Tracker to public records and a sex-offender monitoring map. Only the VantageScore — based on my TransUnion credit report in my one-bureau plan — has a splash of color, with green being good and red bad.

A left-hand navigation bar links to Credit and Identity Monitoring, Lost Wallet Protection and Helpful Tips, as well as the Vault password manager, which works with the Google Chrome, Mozilla Firefox and Apple Safari browsers. (An IDShield spokesperson told us that the password manager doesn't get much use and may be dropped.)

IDShield does not offer two-factor authentication to prevent anyone with your password from accessing your information. Only Identity Force has this security-enhancing feature; the others say it's important or that they're working on integrating it, but it's kind of inexcusable that they don't have it yet.

IDShield's Android and iOS apps were a little sluggish, but welcomed me with my TransUnion VantageScore along with recent alerts. The settings menu in the apps let you change your password and included information about the Vault password manager, protection tips and how to reduce unwanted marketing calls. All the screens display the tech-support phone number.

I couldn't find a way to cancel my IDShield subscription through the web interface. So I sent the company's tech-support people an emailed query and got an immediate auto-reply that my situation would be addressed in 24 to 48 hours.

About a day later, I got an email confirmation that my subscription had been canceled. Unfortunately, the advertising emails from LegalShield continued.

IDShield's three-bureau monitoring plans are an undeniable bargain, especially if you're primarily interested in keeping an eye on your credit reports and scores, or want to monitor your  family's personal data. If you're not facing any special threat of identity theft, you might not need to pay any more.

However, LifeLock Ultimate Plus offers the most comprehensive identity monitoring (and a compelling deal on antivirus software) for the truly paranoid, though it costs twice as much as IDShield and falls short on credit information. The happy medium among best identity-protection services is IdentityForce UltraSecure + Credit, which offers both inclusive personal-data monitoring and quarterly credit reports and scores.