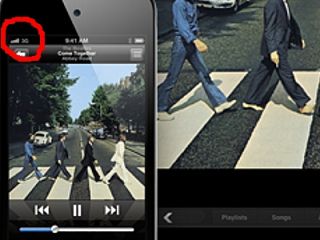 It's like clockwork: the closer we get to a supposed Apple launch date, the more "leaked" materials consumers and press uncover, building hype. We've seen plenty since the beginning of the year regarding the next iPhone and iPod Touch release, and today is no exception.

Wednesday morning iDownloadBlog discovered that Apple "accidentally" loaded a promo shot of an iPod Touch with 3G capabilities on the iTunes website. On the North American shores, the shot was quickly yanked and replaced with a new version, but the iTunes page over in the UK still conveniently displays the iPod Touch 3G without hesitation, as seen here. The only thing missing from the image is a wireless carrier icon.

The "accidental leak" follows recent rumors that the next-generation iPod Touch will feature 3G capabilities when it's revealed in September. This feature was actually spotted in iOS 5 Beta 4, represented as cellular and GPS toggles in the iCloud and Settings menu. The initial discovery led to speculation that Apple won't release an iPhone Nano, but rather intends to equip the iPod Touch with hardware capable of supporting FaceTime and iMessage over a 3G wireless network.

If that's the case, it's assumed that the new iPod Touch will require the same data plans used by the iPad 2. But as always, everything is mere speculation and rumor until Apple officially reveals the device in September.