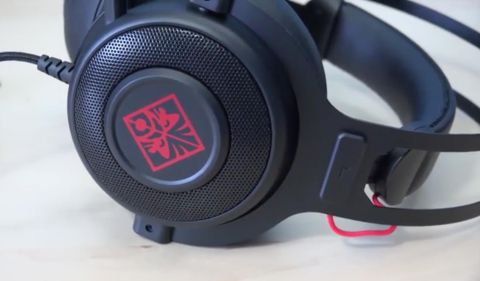 The HP Omen 800 headset resembles a much older gaming headset, making it feel unwieldy, outdated and far too expensive.

Editor's Note: This review initially stated that the HP Omen 800 was based on the SteelSeries Siberia 200. The Omen 800 is actually an original design from HP; rather, the HP Omen Headset with SteelSeries is the device that hews closer to the Siberia 200's design.

HP, like Acer before it, wants to break into the competitive PC-peripherals market. Also like Acer, HP has turned in a fairly quotidian product. The HP Omen 800 ($80) sounds OK, but it's also an unwieldy, outdated headset whose original asking price is far too much. In the current market, you can get much better peripherals for the same $80 that the Omen 800 costs. If you get the Omen 800 as a pack-in with an HP gaming rig, you may as well keep it. Otherwise, grab a SteelSeries Arctis 3 and don't look back.

This headset doesn't feel too heavy, because the construction is all lightweight steel, with plastic ear cups and an elastic headband, but the Omen 800 doesn't fold or bend at all. As such, transporting this headset isn't easy; neither is storing it when you're not using it. Consider investing in a headset stand — if you've got enough room on your desk.

Due to both the size of the Omen 800 and its very, very HP-specific design, it's hard to imagine taking this headset out on an everyday commute.

The Omen 800's most distinctive design feature is a set of enormous ear cups. It's not that much more comfortable than most headsets — just bulkier. There's an Omen logo on each ear cup, as well as on the top of the elastic headband. Two steel wires keep the headband in place, making it easy to get a good fit every time.

There's a retractable mic in the left ear cup, while a small box halfway down the cord houses the volume control and mic-mute buttons. While the retractable mic is a nice touch, the box feels a little outdated; SteelSeries, Logitech and other manufacturers tend to put their volume controls right on their ear cups these days for greater convenience.

Due to both the size of the headset and its very, very HP-specific design, it's hard to imagine taking the Omen 800 out on an everyday commute. I attempted to use it on an airplane and wound up swapping it for a small pair of earbuds instead. The Omen 800 was just too much of a hassle to set up in a confined space.

In spite of the Omen 800's Brobdingnagian proportions, it doesn't sit heavily on the head, and the ear cups put very little pressure on the ears, even if you wear glasses. I wore the Omen 800 for hours on end with no ill effects.

I also handed the peripheral off to my girlfriend to see how she enjoyed the fit. She said that it was very big, which made it hard to move her head around. In general, though, it was comfortable and didn't press down too hard.

In spite of the Omen 800's size, it doesn't sit heavily on the head, and the earcups put very little pressure on the ears.

I evaluated the Omen 800 with StarCraft: Remastered, Middle-earth: Shadow of War, Overwatch, The Legend of Zelda: Breath of the Wild and other games to get a good idea of how the headset would handle both competitive and single-player titles. The results were positive across the board, although it didn't excel in any particular genre.

The Omen 800 simply delivers clear, consistent sound, whether you're listening to Terran armies engage in an intergalactic civil war or Talion fighting his way out of a crowd of bloodthirsty orcs. There's a decent balance between music, voice work and sound effects, although the overall quality definitely skews toward "pleasant" rather than "extraordinary."

Since the Omen 800 connects via a 3.5mm audio jack, there's no software to go along with the headset. It does have an adapter so that you can use the microphone with single-input audio/mic jacks (like on a laptop or smartphone). Otherwise, you can connect the audio and mic lines separately. Either solution works fine.

The mic itself is OK. My voice came out a little fuzzy when I recorded it and communicated with co-workers via video chat, but this mic would get you through the average game of Overwatch. The only issue I encountered was that if I put the mic too close to my mouth, my voice tended to cut in and out. You can solve this by positioning the mic a little farther away than you'd think you have to, but it takes some trial and error to get the distance right. Like with almost everything else about the headset, other models can provide better mics at the same price.

Music plays pretty well on the Omen 800. I ran it through tracks from Flogging Molly, the Rolling Stones, Mark Knopfler, G.F. Handel and others, and I didn't have any significant complaints.

The balance between treble and bass sounded fairly accurate, although perhaps just a bit too light on the latter. Guitars twanged, choirs sang, lead vocalists came through loud and clear. If not for this headset's capacious design, you could probably use the Omen 800 as a decent set of cans outside the house.

HP offers the Omen 800 as a pack-in with some of the company's gaming PCs; otherwise, I cannot think of a single reason to get one. It's a decent enough headset — far from the worst attempt to capitalize on a brand name with an original peripheral — but it's also outdated and expensive for what it offers. The Omen 800 feels like the SteelSeries Siberia 200 or the Logitech G430 more than it feels like any modern headset, and those two devices aren't even available anymore.

If you want a headset that's like the HP Omen 800 but better in every conceivable way, get the $80 SteelSeries Arctis 3. If, however, you want something that costs what the Omen 800 should cost, the $50 HyperX Cloud Stinger is probably the way to go.