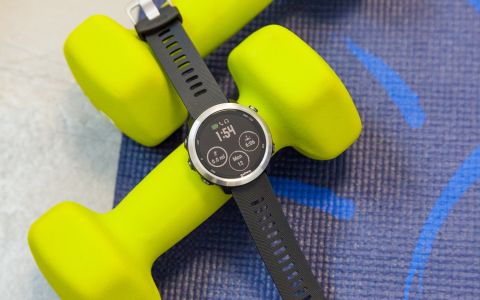 In the past, Garmin's line of Forerunner GPS watches had a utilitarian design with features pared down to only those that runners needed. Now, Garmin is recognizing that runners need more than just advanced run-tracking stats. They need music to power those workouts. And a little style, too.

The new $450 Forerunner 645 Music is a lightweight running watch that can store music, representing a first for Garmin. The long-awaited feature isn't as easy to use as it could be, but the ability to track runs, cross-train with a variety of built-in workouts, pay for items on the go and listen to pumped-up playlists on one device makes the new Forerunner worth the high price tag — for some athletes.

Editor's note (April 13, 2018): This review was updated after Garmin released a software update with iHeartRadio's offline music playlists. We tested the Forerunner 645 Music again and found that the additional functionality made the watch slightly more useful to more people. The score remains an 8 out of 10.

Music: This game changer could be easier to use

I've used many Garmin devices in the past, and I generally find them to be the most advanced fitness-tracking bands around. But the lack of music was becoming a hindrance when rival smartwatch makers such as Fitbit and Apple are offering devices with a plethora of fitness-tracking features and onboard music storage. With the Forerunner 645 Music, Garmin is staying competitive. You can transfer up to 500 songs to your watch and leave your phone at home when you work out.

I've become accustomed to lacing up my sneakers, strapping a smartwatch to my wrist, nestling Bluetooth headphones in my ears and then hitting the pavement unencumbered by my giant iPhone. Being able to do this with a Garmin Forerunner is a long-awaited and much-appreciated upgrade.

While the process of putting music on the Forerunner 645 was rocky to start, Garmin improved the experience with a software update.

With the Forerunner 645 Music, Garmin is staying competitive with Fitbit, Apple and TomTom.

Garmin is working with iHeartRadio so you can sync playlists you've downloaded offline in the streaming service's Garmin Connect IQ app. To install the iHeartRadio app, open the Garmin Connect app, tap on your device at the top of the screen, then select Music. There you can search for music apps, though iHeartRadio is the only one that allows offline song storage on the watch.

Then you'll need an iHeartRadio All Access subscription, which is $9.99 a month after a free month-long trial. To create playlists, use iHeartRadio to follow albums or built your own playlists. Then you can sync your music to the Forerunner by pressing to hold the music shortcut button (the lower left button), selecting Music Settings, Music Providers, then choosing iHeartRadio. The playlists and albums available to sync will show up on the watch face. Make sure your watch is connected to Wi-Fi and plugged into its charger to start syncing.

It's not a difficult process, though it is a cumbersome one. But after all that effort, I had no issues pulling up the new Cardi B album I had synced to the watch as I hit the pavement with a pair of Bluetooth earbuds.

You can also load up your Forerunner with MP3s or AAC files. To do that, you have to install the Garmin Express client on your desktop, connect the Forerunner to your computer, then choose songs or playlists to transfer to the device.

You might be wondering: Who even subscribes to iHeartRadio? Personally, all of my favorite workout tunes are stored in playlists on Apple Music, and there's no way for me to add them to the Forerunner without buying them in iTunes or switching streaming services. (Not gonna happen.)

I don't expect Garmin to ever integrate with Apple Music, but inking partnerships with more popular streaming services, such as Spotify, would make this device much more useful. Garmin has not said if it will be working with other streaming services in the future.

Once the music is actually loaded onto the device, you'll need to pair Bluetooth headphones with it to listen to your playlists on the trail or in the gym. The pairing process isn't quite as seamless as pairing Fitbit Flyers to a Fitbit Ionic or Apple's AirPods to any Apple device, but the Forerunner doesn't take long to detect whatever your preferring running earbuds are. I was able to connect my AirPods and a pair of Jaybird X3 earphones to the watch, but Apple's Bluetooth buds didn't play nicely with the Forerunner. The Bluetooth connection kept dropping, and I could make it through only the first few seconds of a song before the device glitched and then fell silent. The Jaybird-Forerunner connection was just fine.

Overall, the streaming-service integration works best on an Apple Watch Series 3 with LTE, which allows you to stream songs, playlists and radio stations through Apple Music. Offloading songs to a non-LTE version of the watch is also much easier than on a Fitbit or Garmin. However, Fitbit at least allows you to sync playlists from Pandora in the Fitbit app, instead of forcing you to download a separate desktop client to transfer songs.

Design: Sporty and functional with a hint of style

Garmin is now making touch-screen devices, but the company knows that most serious athletes prefer buttons for navigating their fitness bands. It's tough to tap on a screen when running. The Forerunner 645 has not one, not two, but five — yes, five — buttons on its sides. Luckily, you don't have to memorize what button triggers which action, because Garmin has helpfully labeled them, similar to what you'll find on other devices in the Forerunner lineup, such as the Forerunner 935.

Unlike the 935, the 645 Music sports a stainless-steel bezel, which gives the watch a more expensive feel. The newer Forerunner is also a few grams lighter. You can swap out the silicone band for a more expensive one, so the 645 feels less like a sport watch and more like a watch you'd want to wear all day.

On the left, there are buttons to turn on the display's backlight and scroll up and down in the menu. From the watch face, pressing up brings up widgets, including weather, recent notifications from your smartphone, calendar events, your recently played music, how many steps you've taken toward your daily goal, your most recent running workout, your training status and VO2 Max score, and a heart rate graph, which charts your pulse over the last 4 hours. A long press on the up button in each widget calls up more options. You can also add widgets from Garmin's version of an app store, which is available in the Garmin Connect smartphone app for iOS and Android.

On the right side of the watch case are two buttons: one to start or stop a workout or song and one to go back from whatever screen you're in. If you press the start/stop button from the watch face, you'll immediately call up the workout screen. Press the down button to scroll through the watch's built-in workouts, which include treadmill, indoor track, biking and a more general cardio option. You can select to add more workouts to that first workout screen, including indoor cycling, pool swimming, skiing, snowboarding, cross-country skiing, stand-up paddleboard, rowing, indoor rowing, walking, strength-training, yoga, elliptical workouts and stair-stepping. With so many options, the Forerunner 645 is clearly designed to be the ultimate cross-training device for runners.

Workouts: Everything you could ever want

Last year's Forerunner 935 was more versatile than past generations. It could track just about any sport, including swimming, plus a suite of outdoor sports, such as skiing and snowboarding. The 645 does the same, making it a far more functional fitness tracker for athletes than any other smartwatch with onboard music storage.

Garmin fans will already be familiar with the new Forerunner's running features. When you press the start/stop button to launch the workout screen, you can choose one of the built-in workouts. When you start a run, built-in GPS and GLONASS kick on in just seconds and track your mileage, including splits and pace, plus time spent in heart rate zones, cadence and elevation. The Forerunner also delivers a post-run analysis on the display, which tells you how many hours you'll need in order to recover from the workout and what effect the training had on your aerobic and anaerobic health. This kind of data probably isn't that interesting to most people, but some athletes will definitely love to geek out on it.

I also used the 645 in cardio mode to track a Physique 57 barre class, getting some basic heart-rate data and a recovery-time recommendation but didn't track leg pulses or forearm planks. Garmin gives you the ability to design custom workouts in the Garmin Connect desktop app by choosing a type of exercise — for instance, an arm curl — and a length of time or number of repetitions you want to reach. There are a ton of exercises to choose from, but they are geared toward weight-lifting and CrossFit-style workouts, not toning classes like barre.

But for running, Garmin's Forerunner lineup can't be beat. And if you connect another device, such as a foot pod, to the watch, you can get even more data.

Like Fitbit and Apple, Garmin has an app store accessible through its own app, Garmin Connect. You can pick from more than 1,600 apps, widgets and clock faces to install directly on the Forerunner. That's more than the 550 apps and clock faces available on Fitbit's smartwatch platform, Fitbit OS. However, the Apple Watch has thousands of apps, ranging from those for fitness and messaging to ones for smart home controls and games.

The apps available in Garmin's store are heavily focused on fitness. That makes sense, given the device, but it would be useful if Garmin would add a few more streaming-music apps for saving songs offline or some news apps for browsing headlines in between reps at the gym. More smart home apps would be useful for basics such as toggling lights on and off. For $450, a more robust app store would be welcome.

Battery life: Not bad for a smartwatch

Most smartwatches can eke out a few days of battery life on a charge. The Forerunner 645 Music promises up to 7 days in smartwatch mode and up to 5 hours in GPS mode with music. I managed to get about four days of continuous use, even after tracking multiple workouts with GPS activated and listening to music stored locally on the watch. That's in line with other Forerunner devices.

The Forerunner 645 Music is expensive; there's no getting around that. If you're a casual runner, you don't need a device this advanced. A more mainstream and more affordable smartwatch, such as Garmin’s Vivoactive 3 ($250), the upcoming Fitbit Versa ($200) or, for iPhone users, an Apple Watch ($329), would suffice.

But if you'’re a serious athlete who cross-trains and wants to see detailed metrics from a variety of workouts, the 645 Music offers everything you need to leave your phone at home. Onboard music storage, a first for Garmin, frees you from your smartphone, and the plethora of built-in workouts means you'll never be bored at the gym or on the trails.