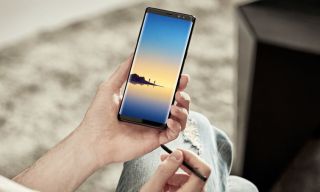 If you're looking for a smartphone that will afford you the fastest wireless connectivity, Samsung's latest Galaxy Note 8 might be the one for you.

The folks over at Booredatwork have published a video to YouTube where they analyze how fast the iPhone X and Galaxy Note 8 are over LTE networks. They note that Apple eschewed many faster LTE technologies in the handset, like Gigabit LTE compatibility. For Samsung, however, Gigabit LTE support is a key selling point.

If the Booredatwork testing is any indication -- on the same networks and in the same locations -- you're far more likely to get faster speeds from the Galaxy Note 8 than you would in the iPhone X.

The Booredatwork testers used the same T-Mobile network connections in New York and San Jose, Calif. at the same times. They employed the same speed testers to ensure the comparison was as fair as possible.

Each time they tested speeds, the Galaxy Note 8 consistently offered twice the bandwidth of its iPhone X counterpart.

As Booredatwork continued to analyze speeds, the results were similar. Upload speeds were about the same, with the iPhone X winning sometimes and Galaxy Note 8 winning in others. But Samsung's smartphone doubled Apple's on downloads.

Booredatwork was quick to note that its comparisons are not "scientific" and that they employed publicly available tools, it's possible that the data was off. But all things considered, it certainly appears that Samsung's smartphone at least offers significantly faster download speeds. And that could very well be due to the Galaxy Note 8 using Gigabit LTE.