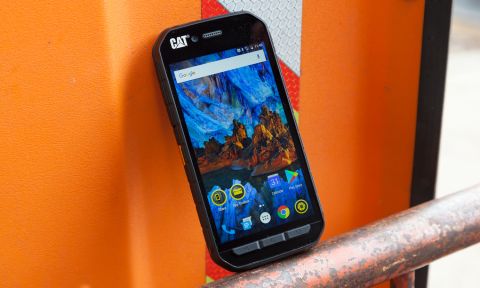 There's no question the latest Cat smartphone can take a beating. But can it beat the competition?

Fortunately, the $449 Cat S41 is here to fill the void. Another smartphone from the famed producer of construction machinery, the S41 is actually produced by Bullitt Group, the same company that designed the Kodak Ektra. If you're in a particularly demanding line of work or need a phone that can withstand nature's harshest elements, the S41 won't let you down. Just don't use it to share pictures of your next vacation.

The Cat S41 costs $449 and features 32GB of internal storage, paired with 3GB of RAM. The phone is only sold unlocked, but you can still take it to GSM networks like AT&T and T-Mobile; CDMA networks, such as Verizon and Sprint, are not compatible. You can preorder it now from Cat's website, with delivery slated for Nov. 16, or pick it up from the likes of Best Buy and Amazon.

Design: Built for a beating

There are tough phones, and then there's the Cat S41. Clad in hard plastic and a textured rubberized material around the sides and back, the S41 doesn't try to play down its rugged roots like the Galaxy S8 Active does. It's not particularly elegant, but then, that's not the point.

Weighing nearly 8 ounces, the S41 is hefty, even though it only houses a 5-inch display. It's also quite thick, measuring half an inch. This can make the phone difficult to grasp for those with small hands, though the grippy material somewhat mitigates the unwieldiness. It's like having a heavy-duty case on your phone at all times.

Gorilla Glass 5 makes the screen almost as strong as the rest of the phone, though the display attracts fingerprints like nobody's business. Fortunately, CAT provides a screen protector in the box for extra piece of mind. All of the phone's ports (including the 3.5-millimeter headphone jack) are given protective flaps to ensure water resistance, which is a key aspect of the design.

The best waterproofing most phones can hope to achieve is IP68 — good for 5 feet of submersion for 30 minutes. This is what you'll get from both the LG X venture and Galaxy S8 Active. The S41 fares a bit better, though. Thanks to those flaps, CAT's handset can survive under 6.5 feet of water for an hour.

It can take a fall, too. The S41 adheres to the military's MIL-STD-810 standard for durability, and is built to brush off 6-foot-high drops onto concrete. A tumble onto the sidewalk only left our unit with scrapes on the corners; the display remained blemish free and the phone functioned perfectly well afterward.

The S41 doesn't try to play down its rugged roots like the Galaxy S8 Active. It's not particularly elegant, but then, that's not the point.

Those who frequently wear gloves will appreciate CAT's decision to go with chunky physical navigation buttons below the display, as well as a programmable multifunction key on the left side. Unlike the Bixby button on the Galaxy S8 series, this gold key can be customized to launch specific apps and features, like the flashlight and answering calls.

Sadly however, amidst the assortment of buttons, a fingerprint sensor is nowhere to be found. You could argue Cat's target audience might not have exposed fingerprints to give, but both the X venture and S8 Active have sensors, putting the S41 at a disadvantage.

Besides adding protective cover, the S41's bulkiness also houses a beefy 5,000-mAh battery, which provides enough juice to make this one of the longest-lasting smartphones we've ever tested. The Cat S41 lasted 15 hours and 19 minutes in our Tom's Guide Battery Test, which consisted of continuous website streaming over AT&T LTE.

The Cat S41's battery does more than just last, however. Cat includes a Battery Share feature that effectively transforms the phone into an external power pack. To make it work, you'll have to use the Battery Share dongle that comes with the phone and plugthat dongle into the S41, rather than the device you're charging. Power will flow from the phone to the second device, and you can even set a minimum reserve on the S41, so that you don't run the handset's battery completely dry.

The S41 lacks wireless charging, but it does support fast charging with the included Pump Express 2.0 wall adapter. Pump Express is MediaTek's counterpart to Qualcomm's Quick Charge technology, though 2.0 is actually an outdated standard — newer devices sport Pump Express 3.0. Still, it helps the S41 fill up 45 percent faster than it would without fast charging.

The S41's 5-inch, full-HD LCD display is surprisingly quite nice, even if it's part of a durability-first handset. The first thing you notice is how bright the screen is — 595 nits when turned all the way up, which blows away the 433-nit smartphone average and even surpasses the Moto G5 Plus at 591 nits.

Side by side with the just-released $399 Moto X4, which also has a similarly sized 1080p LCD panel, the S41 depicted slightly more saturated colors during a viewing of the latest Justice League trailer, but poorer white balance and more muted contrast left room for improvement.

The S41's shooter is so bad, it makes most mediocre budget handsets look like iPhones and Pixels by comparison.

In testing, the S41 reproduced 116.6 percent of the sRGB spectrum and turned in a Delta-E color accuracy score of 1.46 (numbers closer to 0 are better). Neither of these are necessarily class-leading results, but the S41's screen mostly holds its own against the best LCD displays at this price point — a welcome surprise.

Camera: Where this phone fails

There's no such thing as a really great camera in a $400 smartphone. That said, the S41's 13-megapixel shooter is so bad, it makes most mediocre budget handsets look like iPhones and Pixels by comparison.

As a rule of thumb, never use HDR on the S41, or you'll get results like what you see above. The S41's exposure is downright hazy, washed out and completely devoid of proper contrast. It fails to rein in the highlights — particularly the light picked up by the flowers — and lacks the subtle background blur of the LG phone's shot.

The S41 doesn't know what to do with concentrated sources of light, but thankfully, it fares a little better once you leave the shadows. These scenes from a beautiful day in New York absolutely pop on the X venture, with better white balance, more vibrant hues, well-lit shadows and overall sharper detail. The S41's attempt is noticeably more drab, but with HDR off, at least it's not a bleached mess.

Performance: Middling, but not maddening

Driving the S41 is MediaTek's Helio P20, a chipset roughly on par with Qualcomm's Snapdragon 625; the phone also features 3GB of RAM. That's a solid combination for a midrange phone, though I ran into some small areas of concern in day-to-day usage.

The S41 takes a hair longer than it should to boot up, but once it's ready, it performs admirably most of the time. Juggling apps, browsing Chrome, snapping photos and streaming YouTube videos never posed any issues, though navigating Google Maps wasn't as smooth as on other, similarly specced devices. Playing first-person-shooter N.O.V.A. Legacy and arcade classic Crazy Taxi weren't any trouble, so you can expect the S41 to handle some light gaming or tasks that similarly tax the CPU.

If you want a rugged phone that makes no sacrifices in speed and power, look to Samsung's Galaxy S Active line instead.

On Geekbench 4, which tests overall performance, the S41 managed a score of 3,221 — a far cry from the Moto X4's 4,122, but much better than the LG X venture's measly 2,613. The S41 also totaled 12,892 on 3DMark's Ice Storm Unlimited graphics test, again placing it between the Moto X4 and LG X venture at 16,815 and 8,290, respectively. Still, if you want a rugged phone that makes no sacrifices in speed and power, look to Samsung's Galaxy S8 Active instead, which capitalized on its Snapdragon 835 processor to smoke the S41 on both tests.

As busy as its exterior is, the S41's user experience is remarkably spartan. The phone runs Android 7.1 Nougat, and that's it; there's no unnecessary manufacturer skin and almost no bloatware. The only nonstock apps you'll find are OfficeSuite, Battery Share and Cat's App Toolbox — the latter of which offers a curated selection of rugged software, from popular navigation app Waze to more specialized tools like an electrical calculator and an app to help cattle breeders.

We like that Cat kept it simple, rather than fussing with Android. And the features the S41 does add, like Underwater Mode and the programmable-key functions, should be useful to exactly the kinds of buyers the company is courting. We reached out to the company to determine if an update to Android 8.0 Oreo is waiting in the wings, and we'll update this review as soon as we know more.

Few smartphones are built to suffer the kinds of abuse the S41 can handle and still hit a reasonable price point. CAT has done a commendable job of bringing that durability to the midrange market without making too many sacrifices. This is a decently performing handset with almost incomparable battery life, and for the right customer, it definitely suits a need.

But unless you spend a lot of time on a construction site or in the unforgiving outdoors, away from a wall outlet, the S41 doesn't make much sense. A number of competitors, from the Moto E4 Plus and G5 Plus to ZTE's Blade V8 Pro, provide faster performance — and, especially — better cameras for hundreds less. CAT's offering is surprisingly well-rounded compared to other tough phones, like Kyocera's less powerful yet more expensive DuraForce Pro, but it's still not for everyone.