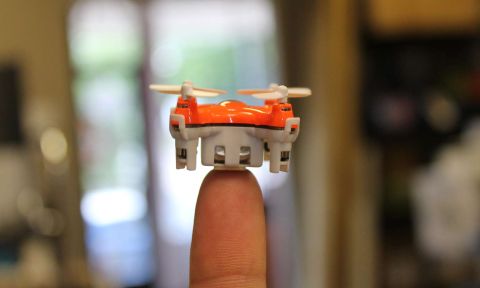 Very cheap and a lot of fun to fly, the Axis Aerius is a great pick for aspiring drone pilots

Good things do come in small packages: The Axis Aerius is a mini quadcopter that flies remarkably well. At just over an inch wide and under an inch tall, this $35 drone is tiny, but it still has most of the features of its bigger cousins, and comes with the same style of remote control and a gyroscopic stabilizer. You don't get great battery life (5 minutes), but this cheap drone is fun to fly and can do some neat tricks.

The first reaction of most people seeing the Aerius is to make the odd squee noises that are usually reserved for kittens. That's because this thing is cute; very cute, like a quadcopter designed for kittens.

Our review model is decked out in white and international orange for visibility, but the Aerius is also available in blue, green and black. The orange model is the most appealing, though. It is absolutely tiny (Axis claims it is the world's smallest quadcopter), with the body measuring just under 1.2 inches wide and about 0.8 inches tall. Each of the four blades is just 0.8 inches wide — barely bigger than a cat's paw.

Four LED lights next to the motors increase the cute factor, in addition to helping orient the device: the blue LEDs indicate the front, and the orange the back. A tiny switch on the side turns the unit on, and a small nub on the back is where the power cable connects.

This quad runs off an 80mAh Lithium Ion battery, which is visible through the plastic case on the bottom. That's very small: Your iPhone 5S is packing a battery that can hold 1900mAh of juice. Charging is done through a USB cable, and we found it took about 22 minutes to recharge a battery on a USB 3 hub.

The remote control is about the size of a small digital camera, with a plastic dome on the top between the control sticks. That's where the drone can be stored, and this snap-shut plastic dome is a smart move, as otherwise you will lose this thing very quickly.

The remote has the same bright color scheme as the drone, with a single status LED on the front top. This goes red when you turn it on, blinking until it establishes a connection with the quadcopter. Two small orange control sticks put you in the pilot's seat, with the left stick handling rotor speed (for up-down movement) and rotation, while the right stick handles front-back and left-right movement.

Two 4-way switches below the control sticks allow you to trim or tweak the controls if the quadcopter doesn't fly straight, but we didn't need to alter the default settings. The remote is powered by two AAA batteries (not included) that fit into the back.

The drone itself weighs just a quarter of an ounce, and the combination of remote and drone weighs just 3.8 ounces. It's a very portable combination that would fit into the pocket for some on-the-road drone fun.

The remote and quadcopter communicate over a 2.4-GHz connection, which is likely the same frequency as your Wi-Fi router. We didn't have any problems with interference between the devices, though, and the Aerius' remote was able to control it to a distance of a good 30 feet away. With a small drone like this, you aren't likely to be using it from any farther than that.

The Aerius is a little quadcopter that can manage a lot of speed. Push the throttle up and it will go flying into the air and out of sight very easily. It is rather hard to get it to stay still and achieve a good hover, though; the thing is so light that even a slight bump of the stick and a change in the motor speed sends it spinning off. It is also very sensitive to wind: Even a slight breeze or blast of air from an AC unit will send it spinning away.

The rotor blades do not have any guard protection from bumping into things, which does cause some problems. They aren't rotating fast enough or are heavy enough to cause any injuries if you fly into someone, but they can sting a bit if they are running at full speed. The blades do tend to catch on bits of grass or leaves very easily when you hit the ground, and they do have a habit of popping off if you hit something. And because they are so small, you'll never find them again when they do pop off.

There are three flight modes, selected by pressing down the left stick until the remote control bleeps. Junior mode (indicated by one bleep) limits the speed and turning of the quad to make flying a little easier, while the Intermediate mode (two bleeps) removes these limitations. The final mode (called Heading Lock) locks the height and direction of the quad, so you can only move left/right and forward/back. It's kind of an introduction to flying mode for newcomers who want to get a feel for flying in two dimensions before they start worrying about the third.

There is also a trick mode. Push the right stick in and the quad goes into trick mode, where it will do a 360-degree flip in whichever direction you push one of the sticks, similar to the trick trigger of Air Hogs Helix Ion. The tricks are the same as well — push the stick and the quadcopter flips over and back to level flying. It’s a cute way to show off some moves, but the constant beep-beep-beep of the remote in this mode is incredibly irritating. A switch or LED would have been a better way to show you that you are in that mode.

Repairability: Blades Are the Only Swappable Part

The Aerius drone is pretty tough. We crashed it into numerous things, dropped it from large heights and generally bashed it about without managing to damage it. The only fragile part is the rotor blades, which do have a habit of popping off if you hit something in flight. These are easy to replace, though, and a set of four spares are included. Caution is required, however, as the two different types (for the two different directions that the blades rotate in) aren't marked. Instead, you have to figure out yourself. (Remember: the similar blades go on opposite corners.)

Axis drones told us that a spare set of blades would cost about $1, or $10 for a full set of 10 blades, which is very reasonable. The blades are the only swappable part on this quad — you can't swap batteries or the frame. But, honestly, for $35, it is just as easy to buy a new drone.

The battery inside the Aerius is tiny, holding just 80mAh of charge. So, it is no surprise that you don't get much flight time: We found that the battery conked out after just 5 minutes, which is pretty average for small drones. By comparison, the Air Hogs Helix lasted between 6 and 7 minutes of flying time. When the batteries run out, you get only about 15 to 30 seconds of notice (the lights start blinking rapidly) before the rotors stop turning and it plunges to the ground.

We don’t expect the same level of automatic landing as the Yunteec Q500, but it would be nice if the device could land a little more gently. The battery took about 22 minutes to recharge, and isn't swappable, so flights tend to be short with long gaps between them. That's a pretty typical recharge time, but a swappable battery would make it more flexible. The Air Hogs Helix Ion took about 20 minutes to recharge.

The Aerius is a fun little drone that offers good value. At $35, you aren't going to shed too many tears if you lose it in flight. The drone flies well, with plenty of speed and light controls. It isn't a racing quadcopter, though; you don't get precise control, and it does tend to bounce around a lot while you are trying to hover. We can't verify Axis Drones' claim that this to be the world's smallest quadcopter, but it is definitely a cute drone that is cheap, simple and a lot of fun to fly.