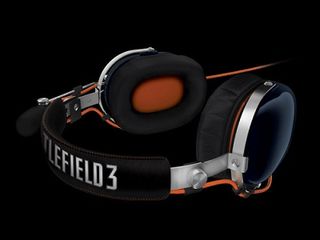 Razer has made some major inroads with licensed products over the last few years, crafting thoughtful products for StarCraft II, Battlefield 3, and Star Wars: The Old Republic, among others.  These products always fall into two categories: existing peripherals that are wrapped in new, game-specific graphics (like the Battlefield 3 version of the BlackWidow Ultimate), or something completely new and unique. The BlackShark falls into the latter category, a headset that was designed specifically to complement the modern warfare themes present in BF3.

I can never be a pilot, thanks to my terrible eyesight, but the BlackShark’s design brings you me one step closer to that unattainable dream. Modeled after headsets used by pilots, the BlackShark’s wire aluminum mic boom and circumaural (closed back) design would be just at home in a plane or helicopter as they would be sitting on my computer desk. The black and orange color scheme, combined with the naked metal throughout the headset’s band, matches that of all the other Razer BF3 gear. The headset stands in stark contrast to the white PC case it usually sits next to, but the orange accents are appealing, I think.

As for sound quality, the BlackShark is a 2.0 headset, so surround sound is going to be virtual. It works as well as most 2.0 gaming headsets currently available, although the closed-back circumaural design gives it an advantage. While these aren’t noise-cancelling headphones, the design does block out a substantial amount of background noise. This helps with positional audio, and being able to track down whatever SMAW-toting baddie you’re chasing around Seine Crossing or Kharg Island. The microphone – which is detachable – does its job admirably, as I never heard any complaints when chatting with friends in Ventrilo or Teamspeak. The BlackShark is phone-friendly, too; the single 3.5mm connector (which is split for PC use via a second included cable) will work with any mobile phone. While I don’t plan on wearing this while talking and walking down the street, being able to plug the headset into my phone while sitting at my desk is a useful feature.

I really do like the BlackShark, but I am concerned about its build quality. The mic boom is already loose, after only a few weeks of use. The BlackShark sits on my head or on my desk, so there’s been no rough treatment from me over the last month. The headband seems to be holding up well, but the mic slides out of position sometimes, and I’ve had no luck in trying to tighten it. If the rest of this headset proves to be just as fragile in the coming months, it’s hard to justify the $130 asking price. The BlackShark can also be a bit tight-fitting for those with large craniums, as I was feeling the pressure after a few hours of game play.

Ultimately, the BlackShark is a great-sounding 2.0 gaming headset. The loose mic boom and $130 price are reasons to pause, but it sounds fantastic, and the design is very attractive.