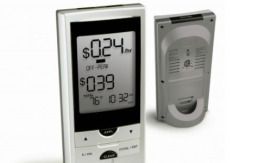 We all know that in this day and age money is power, but when it comes to the monthly electricity bill, a little knowledge can be a very powerful thing. That’s because you can begin to better save power by being able to analyze and closely track your electricity consumption. Millions of homes, offices, and factories do this by using smart meters that go beyond merely measuring how much power is sucked off of the grid but can apply different rates based on how much power you’re using or the time of the day. Some can even selectively turn off major appliances during peak electrical demand. Smart meters also allow utility companies to better manage supply and demand and to offer discounts for those who turn off their air conditioners on a hot day.

But what about the rest of us who have old meters that do nothing other than measure power use? For instance, my unenlightened utility recently installed a digital meter, but it’s just as dumb as the one the house had when I moved in 15 years ago.

As a solution, there are several kits available that monitor your power use and let you keep an eye on how much juice you’re using. The best alternatives predict the cost and help you use less electricity. Far from perfect, they, unfortunately, only estimate the cost of electricity, while ignoring taxes, service fees, and surcharges.

I got my hands on three of the newest household power monitors and used them to keep an eye on my power use for several weeks of the hottest summer anyone can remember. Blueline’s PowerCost Monitor and Grossman Innovation’s Energy Owl have a sensor that fits over the outside of your electrical meter that relays its data to a desktop screen or to a computer via a USB cable. By contrast, PowerSave’s ENVI has inductive clips that wrap around the input electricity cables and the data is transmitted over the air to a desktop display.

Recently, a survey conducted by IMS Research involving 1,000 respondents--half of which were in the United States and the other half in the UK--revealed that over 50% of those surveyed considered monitoring their power use as something that was very important to them. In other words, a power monitor can change the way you look at an electrical outlet and your power bill.

Recent research from the University of Nebraska shows that once people can monitor their power use, they naturally start reducing it. By how much? On average, people lowered their power use by 15%, just by monitoring their use. That means that the average U.S. household, which has a monthly power bill of about $100, can pay for any of these power monitors in less than a year. After that the savings add up quickly. More to the "green" point, that’s the equivalent of more than 1,500 pounds of carbon that won’t be dumped into the air, based on the EPA’s carbon calculator. After all, when it comes to the environment and your electricity bill, a little knowledge can go a long way.