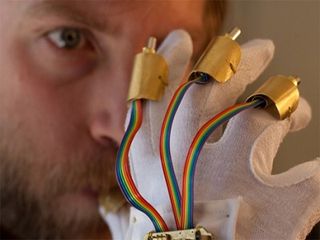 Combining our wild imaginations with modern technology, we are able to become rock stars with games such as Rock Band and Guitar Hero. We may even find ourselves rocking out with invisible instruments as incredible music roars in our head. Thanks to Scott Peterman, our imagination might just be able to produce some real music, with or without technical and instrumental knowledge.

When users mimic the actions of playing these instruments, the gloves will be able to play actual music. To add to the realism, the air instruments even require air from the user's mouth to work properly. For many, becoming a musical genius is nothing but a dream, since years of training and practice is out of the question. With Peterman's new open-source project, the world of playful music might just become more simplified, requiring nothing but an imagination.