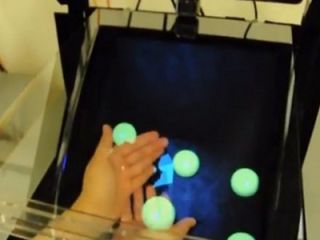 Ever since the introduction of Windows 8, Microsoft has made it obvious that it envisions a future filled with rich touch interfaces and virtual interaction systems, and the research team's most recent development is no exception to the company's motives. Dubbed Holodesk, Microsoft's research project allows users to interact with virtual, 3D objects using other objects or even their bare hands.

This futuristic tech developed from the Sensors and Devices group of Microsoft Research Cambridge looks like it came straight from the future. It may not be as refined as the interfaces we see in sci-fi flicks, but future developments could lead to some very interesting gaming or engineering interfaces.

At the moment, users will only be able to view the 3D holographic objects through a plastic sheet attached to the machine, but we're definitely excited to see later versions of the Holodesk. Head on over to the Microsoft Research YouTube channel to subscribe for future updates.