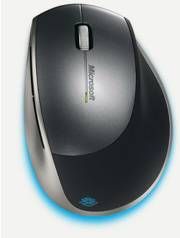 Microsoft has announced Tuesday a handful of new computer peripherals, but none more exciting than its new Explorer Mouse with BlueTrack technology. Unlike traditional laser or optical mice, a mouse with BlueTrack technology will allow the mouse to work on virtually any surface, from shag carpet to concrete, though mirrored surfaces or clear glass will still remain a problem.

According to Mark DePue, platforms engineering manager at Microsoft and co-inventor of BlueTrack Technology, “research shows that people aren’t sitting at a desk all day, but they’ve gone mobile. In fact, 72-percent of PCs sold are notebook PCs, and consumers need a mouse that can go with them anywhere.” In a demonstration of the mouse, Microsoft shows the mouse working accurately and precisely on granite, marble, wood flooring, carpet and a dusty surface. For those who may have shared the experience and frustration of trying to use a mouse on such surfaces may appreciate what Microsoft has done.

The new mouse looks and seems a lot like a typical laser mouse, but Microsoft claims the technology differs due to the use a blue beam of light that is four times larger than that of what many laser mice use today, which allows the sensor to work even on shag carpet. Other technologies involved include a specular optics architecture, proprietary pixel geometry and a Microsoft-designed image sensor. The Microsoft terminology being used may not mean much to everyone, but if the mouse works as claimed, that’s all that really matters.

There will be two versions of the new Microsoft Explorer Mouse, a desktop version and a more portable mobile version called the Explorer Mini Mouse. Both come with BlueTrack technology, five-buttons, a 2.4 GHz wireless connection, a snap-in transceiver for added portability and a right-handed ergonomic design that features a blue light and chrome detailing. The Explorer Mouse and Explorer Mini Mouse come with a three-year warranty and will be available at Best Buy stores in November for $99.95 and $79.95, respectively.