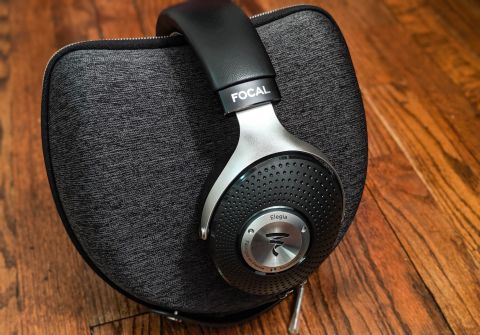 Look past its $900 MSRP and you’ll find the Focal Elegia to be a sonic pleaser with audio quality that matches its premium aesthetics. It’s just not as feature- or portable-friendly as other headphones.

Focal doesn’t share the same brand recognition as industry staples like Bose, Sennheiser or even Plantronics. What the French audio manufacturer does have is credibility, which has grown stronger over the decades due to its stellar loudspeakers, and more recently, its critically praised (and expensive) circum-aural headphones.

With the release of its first high-end, closed-back headphones dubbed the Elegia, Focal introduces an audio solution engineered to produce remarkable sound across different devices for a cheaper price; it’s originally listed at $900, but has seen $300 markdowns on several online retailers. Beautiful aesthetics also make these headphones an appealing investment for audiophiles, but the cumbersome design isn’t the only drawback these fancy cans possess.

Focal sells other “budget-friendly” headphones, but the Elegia is its cheapest circum-aural closed-back model. You would never get that impression from the fine craftsmanship displayed here, as almost every detail screams high end on these cans.

Let’s start with their most eye-grabbing attribute: the earcups. The exterior is covered in sturdy black aluminum with tiny craters that calls to mind a planetarium dome, giving the headphones some ultramodern swag. The company logo is etched beautifully right in the middle of a small aluminum circle. Focal also included memory-foam ear pads made from plush microfiber to complement the Elegia’s overall look.

Extending the headphones are arched yokes that connect to the earcups with beveled screws on the side. It’s impossible not to admire these detailed elements, especially since they aid with comfort. How Focal managed to construct the yokes’ aluminum to be so thin and still maintain sturdiness is very impressive.

The headband is durable and has some give to it, but it isn’t as flexible as those featured on other over-the-ear models. It still looks great wrapped in sleek microfiber leather. My only other complaint would be that the brushed finish on the earcups gets scuffed easily.

Larger size means more weight. Despite the Elegia being the lightest headphones in Focal’s high-end series, it is a hefty sucker at 15.16 ounces. This is lighter than other premium headphones like the Audeze LCD-3 (19.1 ounces), but far heavier than most noise-cancelling headphones like the Bose 700 (9 ounces).

One major benefit these cans have going for them: on-ear comfortability. They might be huge, but they provided a snug, relaxing fit that allowed me to hear music comfortably for about 1 to 2 hours. The memory foam ear pads had great cushioning and didn’t press up firmly against my ears or skin. They also created a full seal to prevent external noises from affecting the soundscape.

I stress the 2-hour listening mark because depending on your pain threshold, the Elegia can be painful on the skull after a while. The clamping power of the headband is firm, resulting in some fatigue, possibly even a headache. Adjusting the yokes to a higher setting relieves some of this discomfort, but also makes the headphones looser; the extra weight causes them to fall off whenever tilting your head forward.

I think any pair of headphones priced over $500 should come with lots of accessories – the Elegia doesn’t. You’re given an aux cable, gold-plated 3.5mm adapter, and a hefty zippered case that resembles a person’s posterior when flipped upside down. All jokes aside, each of these are well built and play into the headphones’ durable, premium charm.

The case has plenty of room to store everything, along with any extra mobile accessories (e.g. iPod Touch, Tile Mate). I’m also fond of the handsome dark grey finish. The cable is robust and should survive the abuse you’ll put it through on daily commutes. It’s also short and keeps you tethered to devices more closely than you would normally feel comfortable with.

Focal chose to go with its M-profile aluminum/magnesium driver instead of the popular beryllium driver used in past flagship headphones. On paper, it’s a cheaper alternative to beryllium and is said to give the Elegia the same quality and attention to detail as the company’s HiFi speakers. That’s an admirable goal for any headphone maker to set. It’s also one that seems a bit unrealistic for headphones listed under $1,000. What I can say is the driver does a magnificent job with sound reproduction.

Employing two vents – one on the speaker driver and another on the back of the ear cup – allows for extended frequency response. In other words, it balances lows, mids, and highs effectively without distorting them. You definitely won’t hear any muffling on these cans, not even at max level.

These headphones have a spacious soundstage that reveals distinctive details in recordings. I was enamored with the instrumental separation displayed on jazz classics like John Coltrane’s “A Love Supreme, Pt. III: Pursuance.” The piano and hi-hat action blended perfectly, as the left and right channels bounced each sound effect, respectively, off my ear drums. Ray Charles’ “I’ve Got A Woman” was another great listen that serenaded my ears; the musician’s airy vocals took center stage over the infectious rhythm-and-blues swing.

The Elegia extends that same aural depth to seemingly, less complex productions. Pull up a hip-hop song like Mobb Deep’s “The Realest,” which is stripped down to nothing more than a stringy bassline, and you’re going to pick up on sounds you never knew were layered into the background. That’s how open the sound is on these cans.

I also like how Focal scaled back the volume, which gives the low end a stronger presence. Head-nodding was a natural reaction when rocking out to the boom bap-ness of Gang Starr records like “Mass Appeal” and “Skills.” DJ Premier’s drum loops were engrossing. In general, bass feels better balanced and livelier on the Elegia than reference-grade headphones like the LCD-3, whereas it can come on too strong on reputable headphones like the Sony WH-1000xM3.

However, I wouldn’t describe the audio as neutral. There were details on certain records that went unheard. I wasn’t able to identify the infamous seagull-like effects on The Beatles’ “Tomorrow Never Knows,” whereas the LCD-3 made them transparent. Vocal clarity was impressive, but the WH-1000xM3 can also deliver similar results on songs with simple musical arrangements.

Closed-back headphones are a give-and-take scenario. While they’re designed to block out a lot of ambient noise, they also leak sound at ridiculously loud levels. Fortunately, the Elegia is engineered to produce sharp sound at a low volume, so you’re able to enjoy music in peace without disrupting others. I watched Netflix films on my laptop at a low volume and heard dialogue clearly. It was only when I raised the volume on my MacBook Pro past the mid-level point where my fiancée heard explosions booming from the headphones.

Size alone should tell you these headphones were designed more for at-home listening than portable use. You can use the Elegia on mobile devices. However, living the dongle life with these cans is a compromise you have to feel comfortable making in order to enjoy excellent sound quality on the go.

There is no need to tweak the EQ settings in Spotify because the Elegia already spoils listeners with bright sounding mids and highs. You’ll also hear Instagram clips much clearer than what comes out of your smartphone speaker. Listening to the headphones on the train wasn’t an inconvenience for me or commuters. Then again, keeping the volume low did prevent awkward stares from coming my way.

The lack of a control module does hinder the mobile experience a bit, but since many smartphone users prefer using the volume rockers or on-screen controls to manage music, it’s not that big of a deal.

The Elegia won’t match the near-perfect sound quality of other expensive headphones (e.g. Audeze LCD-3, Focal Stellia), but it produces rich, accurate audio that you won’t be disappointed with either. Its greatness lies in the genius engineering of the M-profile dome driver, which does a solid impression of reproducing sound the same way one would hear it from a pair of speakers.

Pairing the headphones with a mobile device does enhance the sonics. Unfortunately, the lack of controls and modern features, along with its massive form, are sacrifices you’ll need to seriously consider before walking out the door with them.

Price will eventually be the determining factor. Some retailers have the Elegia listed around $600, which some people will find steep despite the $300 markdown. There are also other options like the WH-1000xM3 that offer a personalized listening experience for half the cost. Be that as it may, if sound is what you truly value most, then there is no reason to overlook the Elegia – whether discounted or at full price.