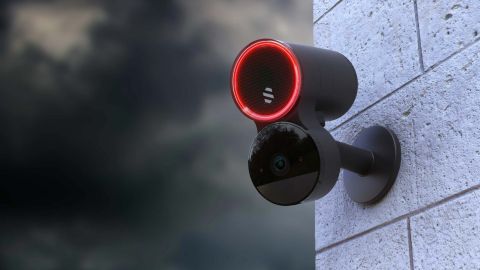 Get Deep Sentinel's security cameras if you want live guards and AI monitoring your property 24/7.

Deep Sentinel approaches security quite differently from typical home security cameras. Many other systems sold to consumers sound a burglar alarm after a thief has entered, and provide recordings of your property being stolen or vandalized. Deep Sentinel's goal, however, is to prevent crimes from happening in and around your home. It's a great idea that works well, but the monthly fee for Deep Sentinel's monitoring system is a significant investment.

Deep Sentinel's cameras use artificial intelligence to spot potential intruders around your property. When that happens, the camera sends an alert to a professional security guard, who can view a feed from that camera. The guard can then communicate via the camera’s speaker to the person on your property, sound an alarm and even contact local authorities. You have the option to turn off monitoring by setting a camera to "private," which will still allow you to view the live feed.

24/7 property guards
What sets Deep Sentinel apart from competing security cameras is the human being/AI teams that monitor your property 24 hours a day, every day. The guards (who are stationed at the company's headquarters in California) are trained to recognize dangers and to respond immediately. In my interactions, I found the guards respectful and helpful.

Preventive security
Typical security systems are reactive, whether it's an alarm system installed by professionals, or a couple of security cameras placed in the home by consumers. They respond only after a crime has begun by recording a video, setting an alarm, sending you a notification on your phone and calling the police.

Deep Sentinel focuses on preventive security. For instance: Suppose someone approaches your front door and picks up a box that UPS delivered earlier. Before that person can walk away with your box, a loud, authoritative voice blares at them from the camera: "Put down that box. I see you. You are wearing a gray hoodie. I'm going to call the police now!" The guard then triggers a blaring 104-decibel siren. Hopefully, the potential criminal runs away and leaves the box where it belongs.

Deep Sentinel reports that when one of its guards calls the police, intruders take it more seriously than typical alarm systems. That's because the guard is a human being (as opposed to an automated alarm), and he can describe the intruder and the crime in progress. As such, the call ranks higher on the dispatcher's priority list.

Quick response
David Selinger, co-founder and CEO of Deep Sentinel, said that the company's highest priority is a quick response. "Speed of delivery is our prime objective, as seconds can cost lives."

If the system sees a crime occurring, Deep Sentinel promises that a guard will notify both the police and the owner within 30 seconds. For less pressing matters, guards will respond within 60 seconds, like confirming a package delivery, a person at the door or police on the property.

"What we optimize for is speed," Selinger said. "The speed of video delivery… the speed of two-way audio… the speed of live view. We're not optimized for video quality. It's more important to us that the guard can view the frames within a couple of seconds of an event starting."

The camera does not buffer video. As soon as a camera captures video, the device sends footage to the hub, where the AI analyzes it and sends it to the monitoring guard.

Audio: Loud, clear and natural
Audio is also optimized for speed; Deep Sentinel claims a latency of 5 milliseconds. In addition, the audio is loud and clear, thanks to the camera's 104-decibel speaker.

Since your primary interaction with the Deep Sentinel security system involves talking to a guard through the camera at any time of day or night, such high-quality, responsive audio is important. I was also able to initialize highly audible two-way conversations with someone standing outside my door using the phone app. Though audio in the current camera models is half-duplex, there were no time gaps in either type of conversation.

More privacy
Deep Sentinel's cameras are optimized for outdoor installation, around the periphery of your property. I put one camera at my front door, another covering my driveway and a third at my back door. This setup had the added advantage of offering a greater degree of privacy than having security cameras in various rooms of my home, as those devices would record my family, my friends and me.

Substantial hardware
The dark, gunmetal-colored, weather-resistant (IP65) cameras are large (2.56 x 5.18 x 4.41 inches) and heavy (14.6 ounces with the battery), conveying the feeling of quality construction. What's more, they are obvious to even casual observers, helping to add to the deterrent factor. That's especially true when the 2.5-inch bright red ring around the lens lights up to indicate that the camera is recording.

The rechargeable 9600 mAh batteries retain their charge for months. (The exact length of time depends on how often visitors activate the camera.) The three-camera-plus-hub package includes four batteries, so the hub can hold the extra battery at the ready in its recharging port. Deep Sentinel says that future models will have the option of hardwiring, so you won't have to worry about batteries. The company is also planning to market solar panels for keeping batteries powered.

Streamlined App
The streamlined Deep Sentinel app has only three key screens. This design makes the app simple to navigate, while providing well-organized, useful information about your devices and property.

Prominent on the Home screen is a scrolling ribbon of large thumbnail screen captures from recent video recordings. You can then tap a thumbnail to play the full video. The thumbnail's caption identifies the camera involved, the time of the incident, the name and badge number of the guard who reviewed it, and an icon indicating what (if anything) the guard did at the time of the recording. A green check mark means the guard verified that everything is OK, while a yellow flag indicates that the guard intervened.

Underneath the thumbnails are your cameras and hub, with a recent video screen capture, and an indicator of how much power your battery still has. To see the live feed from any camera, you can tap its icon on the Home screen.

If you want some privacy, you can easily suspend the guards' view of a camera, while still being able to see the live feed through the app yourself. Either tap the eye icon next to the device's listing on the Home screen, or tap on the house icon to define how long you want the camera to be set to private, anywhere from 5 minutes to 24 hours. Unfortunately, you can't schedule in advance when you want the camera to be on, and when you want some privacy.

The History screen is similarly easy to understand.You'll know at a glance if a guard had to intervene.

Whether you tap the thumbnail screen capture on your Home screen or on the History screen, the video opens immediately in an horizontal full view. It's easy to tap on the Share icon to send video via email or text message, download it to your phone or share it on Facebook.

Since most concerns about your security are in the guards' purview, the app doesn't give you much control. In the live-feed window, I was able to tap to speak to a delivery person, telling him I'd be outside in a moment to sign for the package. I was also able to refine the area of coverage within the camera's frame, so that the AI would ignore cars driving past my house.

Deep Sentinel plans on offering extended cloud backup services in the future, at which time it expects to implement a web portal in addition to the phone app.

Low Resolution Video
As mentioned above, the Deep Sentinel system is optimized for speed, so the camera's native 1080p resolution is reduced to 480p to save on bandwidth. That means the videos tend to be low-quality.

My daylight videos had good color and exposure, and faces were easy to recognize. However, the videos were pixelated, with blurred details. My night-vision videos were much more mushy, pixelated and blurred, with few discernable details.

Then again, all the video needs to do is provide enough information for a guard to recognize that a crime is being committed. The reduced bandwidth of lower-resolution videos translates into increased speed when stopping such a crime. And if there's no crime to prosecute, the recording won't be necessary as legal evidence.

Only a Guard Can Sound Siren
I like the idea that a real human being is monitoring the system, and will sound the siren if he sees a crime in action. However, if I were present when a crime is about to happen, I would also like to be able to trigger the siren from my app or the hub by myself. At present, I can't.

The standard Deep Sentinel package includes three cameras, four batteries, a hub and a sign to put in your front yard, which warns that your property is protected. The price for that package is $499, which is highly competitive when compared with other security cameras of similar quality. For example, an Arlo Pro 2 system with three cameras and the base station costs $459.

However, Deep Sentinel's monitoring service costs $50 per month, which is far more expensive than the typical security camera's cloud storage plan, and more like a monitoring fee from a home security system. For example, Arlo's Smart Premier Plan, which offers 60 days of rolling storage for up to 20 cameras, costs $15 per month.

While other security camera systems' primary purpose is to record crime, Deep Sentinel is designed to prevent crime. I already have a top-notch professional alarm system in my home. And yet, during my testing period with Deep Sentinel, I felt much safer, and tended to not worry about packages that I knew were scheduled to be delivered. Given that the initial price for the Deep Sentinel cameras is equivalent to the Arlo cameras (which won our Editor's Choice award), the only question to ask is whether that kind of peace of mind is worth the steep monthly fee. If you can afford it, I would say that it is.