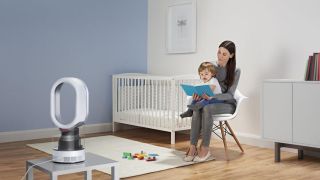 Running an air purifier is one good way to improve the indoor air quality in your home. These devices use internal fans to suck in air and send it through a series of filters, which in turn collect a variety of pollutants before circulating the air back into your living area.

In theory, the air-filtering process in the best air purifiers removes particles you don't want to breathe, leaving you with cleaner, clearer air. But how do these devices actually work — and what can't they do? Here's everything you need to know about air purifiers.

Air purifiers contain fans that pull in surrounding air and then push it back out. In between, the air flows through filters (usually at least two) that capture pollutant particles such as pollen, dust and pet dander. Most purifiers allow you to choose different fan speeds, which can change both how quickly your device works and how much noise it makes.

You can find noise-level ranges (in decibels) for different fan settings listed in your machine's specifications. Some air purifiers are far louder than others, but most of the devices we've reviewed cause minimal disruption, especially at lower speeds.

Most air purifiers use mechanical air filters, which trap particles in the filter's material as the fan pulls air through. The air purifiers we recommend generally have two types of mechanical filter: a prefilter and a true HEPA filter.

Prefilters catch pet fur, human hair and other large particles before they even make it to the purifier's main filter. Some prefilters are washable, but most are disposable. Keep an eye on your prefilter and wash it or change it out on the manufacturer's recommended timeline.

The stuff that makes it past a prefilter then passes through the main filter. The gold standard for air purifiers is a high-efficiency particulate air (HEPA) filter. True HEPA filters remove 99.97% of particles that are 0.3 microns in size or larger.

However, individual "HEPA" or "true HEPA" filters aren't tested or certified, and if the housing around the filter isn't airtight, particles can pass through without getting caught.

There are also a number of devices that use "HEPA-type" filters, which may not perform as well as true HEPA. Your best bet is to go with a well-made device that says it uses HEPA or "true HEPA" (i.e., not just "HEPA-like") filters.

Our top pick for air purifiers, the Coway AP-1512HH Mighty, uses a HEPA filter with a washable prefilter. It's also got an optional ionizing function that gives small particles an electrostatic charge so they cling to the filter, but you can turn that off if you're worried about creating ozone, which can be a health hazard in itself.

The HEPASilent filters combine loose filters with an ionizer that supposedly makes up the difference at catching smaller particles. Because the looser filter lets air pass through more quickly than a tighter HEPA filter would, Blueair's air purifiers have good CADR ratings (explained below). Lab tests have found that the Blue Pure 211+ is very efficient at cleaning the air.

IQAir claims that its HyperHEPA filters can extract particles as small as 0.003 microns, dangerously small particles that "once inhaled, move straight through the lung tissue and directly into the bloodstream … even the brain!" (We’re not medical experts, but that seems a bit far-fetched.)

Scary scenarios aside, a HyperHEPA filter isn't necessarily better than a true HEPA filter at catching particles much smaller than 0.3 microns. Because of the various mechanisms they use to trap particles, HEPA filters are most efficient at stopping particles smaller than 0.1 microns and larger than 0.4 microns. The 0.3-micron size is where they are weakest, and which creates the most variation in efficiency among filters, which is why the HEPA standard is calibrated to that size.

Some air purifiers have an additional filter to remove gases and odors. These are usually made of activated carbon, which can absorb pollutants that pass through it. However, these filters generally work for only a limited number of gases, so you can't rely on them to remove every odor and gaseous pollutant in your home.

A few air purifiers on the market use electrostatic attraction instead of mechanical filtering. When air flows through these devices, particles are charged and then attracted to a collection surface or to other ions with the opposite charge, with the ion pairs then settling on the floor, wall or furniture.

According to the Environmental Protection Agency (EPA), there is no standard for electronic air cleaners. Plus, these devices may produce ozone, which is a lung irritant.

The EPA does not recommend air purifiers that explicitly produce ozone. For ozone to even be effective in removing indoor air pollutants, it has to exceed levels that are safe for public health.

MORE: This Smart Air Filter Wants You to Breathe Easier

As mentioned above, the Coway AP-1512HH Mighty has an ionizer function that you can switch off. By contrast, ionizing is key to the function of the HEPASilent filters used by the Blueair Blue Pure 211+ and Blue Pure 411, so you might not want to turn it off. Blueair says its filters produce very little ozone.

Some portable air purifiers have ultraviolet lamps that the manufacturers say kill dust-mite allergens, microorganisms like bacteria and mold, and gas pollutants as they pass through the device.

While this sounds like a helpful feature, these particles must be exposed to much higher levels of UV light for much longer than in a typical purifier for the radiation to have any meaningful effect.

The EPA cautions against relying on UV light without also using a HEPA filter, as dead or deactivated particles can still be irritating. Plus, like air purifiers that rely on ionizing functions, those that use UV lamps can produce ozone.

The bottom line: Air purifiers that try to sell you on UV irradiation probably aren't the best you can buy. Among the air purifiers we recommend, the PureZone 3-in-1 True HEPA Air Purifier uses a UV light, but it also gets high marks from users for its low noise, small size and attractive design.

When choosing an air purifier, you'll want to look at the device's clean air delivery rate (CADR), which tells you how effective the purifier is at filtering a specific room size. CADR ratings are assigned by the Association of Home Appliance Manufacturers and generally contain three numbers: one for smoke (the smallest particle), one for dust and one for pollen (the largest particle).

A higher CADR number means the purifier can filter out more particles and clean larger rooms. For example, a purifier with a CADR of 161, such as the Blueair Blue Pure 411, will be adequate for a small bedroom with low ceilings, but you would want something like the Coway AirMega 400 and its CADR of 350 to handle the air in a large living room with high ceilings.

The EPA has set minimum CADR ratings that it recommends for various room sizes:

What air purifiers don't do

Air purifiers capture only airborne particles, meaning the devices cannot filter the dust, dander and pollen that collects in corners or on countertops. Purifiers are not a substitute for deep cleaning your home.

Most air purifiers cannot effectively filter out volatile organic compounds (VOCs), either. These are the gases found in paints, polishes, detergents and other household products; they're also what creates the "new car smell." One air purifier we recommend, the Austin Air Healthmate HM-400, does filter out VOCs.

Finally, no matter which types of filters your air purifier uses, it's important to replace them regularly. Most filters provide recommended replacement timelines based on how often you run your device. If your filter is dirty or has reached its capacity, your purifier won't do much good.